Home » TV & Movies » A Day In The Life of… Hunted: Winner spills all on 'incredible' experience

A Day In The Life of… Hunted: Winner spills all on 'incredible' experience

Hunted returns tonight for another epic series on Channel 4, and previous winner Rob Ellington gave us all the info on exactly how he stormed to victory with best friend Ben Arrowsmith in 2020.

Have you ever thought of voluntarily going on the run?

Probably not, that would be ridiculous. But it turns out thousands of members of the public are more than up for taking on that exact challenge.

Since 2015, a tiny handful of lucky wannabe fugitives have got to experience what it’s like to be unofficially ‘wanted’, beating off competition from around 50,000 others applying for a spot on Channel 4’s Hunted each year.

They must avoid detection from a team of so-called Hunters, a group of current and former police and intelligence officials, for 25 days in order to win a share of a £100,000 prize pot.

The finale sees any remaining contestants set off on a mission to reach a designated extraction point before being captured, which they are informed of just a few days before the process ends.

While we don’t particularly fancy our chances, Metro.co.uk spoke to one of the four winners from the 2020 series, Rob, to give us the complete lowdown on exactly how he made it to the finish line. 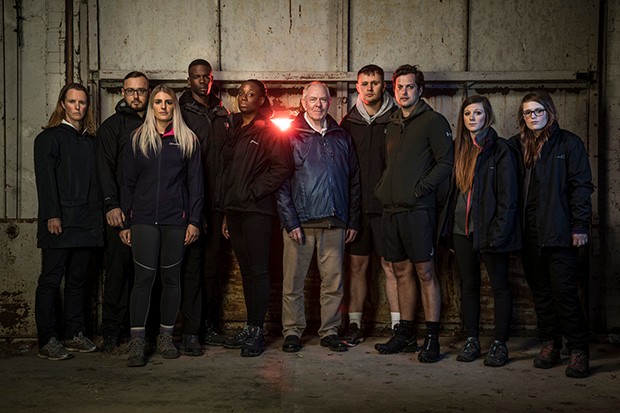 Rob gave us some mad stats on just how many people try to make it on the show each year, and with just one spot available to be taken by two guys, the pair beat absolutely all the odds by being cast.

‘Normally, it’s broken up with a couple of singles, and then there might be a couple and so on, it’s a complete variation of people.’

The audition process was pretty lengthy, asking questions about how they’d plan a potential fugitive situation (as you do), but the boys decided to completely go for it and have a laugh – which clearly paid off.

Rob commented: ‘The [audition] video itself, Channel 4 said it’s the best one they’ve ever received, which is pretty mad considering how many shows they do.’

They opted for Tina Turner Simply The Best as their background music, with the contestant laughing as he admitted: ‘It’s an awful edit. If we didn’t get accepted on the show, that video would have been funny enough. We’d have enjoyed that anyway.

‘The key in terms of the application – lots of people asked me afterwards, how did you get on? I guess, don’t say what they want to hear. Because most people go, “they [producers] want me to say this, so I’m going to say it”. They want to see if you are going to be like a laugh or you can be good on TV. But you also have to stand out, you have to be different to everyone else.’

Producers cast them as the ‘underdogs’

Social media content creator Rob was called up by a producer from Shine Productions, who loved their audition tape and quickly jumped on a train to Reading, to do some major ‘digging’ into their story.

The fact the pair both ‘struggled at school’ was a key theme in their audition tape, which led producers to spot something about them that viewers would love: ‘We both knew that we had things that we weren’t as good at as other people but we knew we could do other things and we just said to him, “Look, we just want to prove everyone wrong”.

’In our video, we said, “Good people who have good hearts can go a long way”. It doesn’t really matter if you’re not academically the highest, you can do it. We were cast as underdogs. That was our main reason for being cast – because everyone loves an underdog. I guess at that point in terms of the application, they want a reason as to why everyone [watching] is going to like you,’ Rob said.

Preparation has to be top secret, but on a whole other level

Fans of the show will be well-accustomed to the forensic strategies of team Hunters in trying to track down the fugitives, using powers of the state such as ANPR, CCTV and call tracing.

But that starts way before the contestants are let out into the wildness, as Rob revealed the lengths the Hunters will go to, even weeks prior: ‘[Production] said to us, “Do not post [that you’re going on the show] on social media”, and I said, “Why, out of Interest?”. They said, “the Hunters will start looking for you now”.

‘That’s how seriously the show is taken. If they found out me and Ben [were going on], from us tweeting, for example, “Oh guess what we’re on Hunted starting in four weeks’ time,” the hunters would have spent the next four weeks already investigating our background. Yeah, everything had to be like locked down quiet.’

Fugitives do actually meet beforehand but aren’t allowed to talk

‘Otherwise, for example, if [fellow winners] Dan [Ryder] and Hayley [Morrison] said to us, “We’re from Wigan”, Well, we were never gonna go to Wigan while we were on the show because we knew Hunters were gonna be there. You are literally not allowed to talk to each other,’ Rob recalled.

In previous years, contestants were allowed to take rucksacks out into the wild with them, but this was not the case in Rob’s series. They were armed only with a book full of useful contacts each, with most preparations done face to face.

‘You were allowed one book with you. That was it. We had a book each with some important contact details and that was the preparation,’ he told us.

Rob said anyone considering the show to ‘be prepared to lose some weight’ and added: ‘I lost two and a half stone on the run. I ate two apples in my first three days on the show. You can imagine, we went from nice hotel meals paid for by Channel 4 to nothing!’

Fugitives have no idea how each other are getting on

Unless someone is caught, the contestants have no clue regarding the fate of their competitors.

Rob said of the uncertainty: ‘It’s incredibly difficult, but you genuinely have no idea really on how the others are doing. Because, you don’t know if you’re winning, you physically don’t know.

‘You can think you’re doing well, and then the next day you did horrendously. You can go 10 days without any problems and one day you make a mistake and you’re back on their number one list.’

The Hunters were outsmarted with the powers of Xbox game chat

Ben and Rob came up with a genius way to communicate which the Hunters were unable to access – which had never been used on the show before – using none other than Xbox gaming chat.

Rob explained: ‘We did our research into the game chat and we knew about the voice over internet protocol, which is called Voip.

‘The Hunters mentioned on the show, they were like, “Bloody hell, how do they know about Voip?” which means they cannot listen to this conversation. We were so smug, watching it back.’

But the pair were nearly caught by complete chance in Shrewsbury

Without even realising, many of the contestants opt naturally for the middle of England, to give them the best chance of getting to the mystery access points.

But the Hunters are always about 10 steps ahead, with the decision to head to the Shropshire town nearly proving costly for the pair, where they narrowly missed being captured.

Seconds after finding a hotel to crash in, the Hunter team was stood directly outside, but this was unbeknownst to either party, with Rob revealing: ‘We were told after the show, “Did you know in Shrewsbury, there’s a Hunter team waiting [in Shrewsbury] for the extraction stuff to start? When you walked into that hotel, 10 seconds later the Hunters were standing outside that door.

‘There was zero knowledge on either side. They had no idea we were there, and we had no idea they were there. If they’d seen us… potluck, but the viewers would have gone crazy if we had been caught. People don’t realise how genuinely serious it all is.’

Contestants are given ‘incredible support’ throughout and after the process

Rob explained how all fugitives were taught first aid beforehand, in case they got themselves into any trouble, as well as having comprehensive psychological support.

’You have to do a psychology test because it’s not for everyone. I’ll be honest, it’s mentally the hardest thing you’ll ever do, to constantly feel like you’re being chased. One decision can take 45 minutes for you to make, which could be as simple as going into a shop to buy a sandwich,’ he added.

He was regularly called by a psychologist who ‘works on big ITV shows’ to check in with him after the whirlwind process came to an end.

‘It’s very overwhelming,’ Rob shared. ‘At the end, you go from avoiding every camera in the world, not saying anything to anyone, hardly interacting with anyone but you and your partner. Then suddenly we’re in a train station with 1000s of people walking and you’re still dodging cameras, you don’t lose it!.

The contestant took a week off of work to ‘regroup’ after completing Hunted but stressed how ‘incredible’ Channel 4 were at all times.

Some viewers have very weird reactions

‘On the first episode [viewers] saw us sleeping rough by a bridge and we weren’t shown until episode three, episode two we weren’t there. Someone tweeted, going “genuinely have Rob and Ben died?” And I replied and said, “I can promise you now I’m not dead. Enjoy the show”.

And he even received a bizarre request from one very keen fan: ‘Weirdly, I had someone asking for my socks? One hundred pounds for my socks. I thought what the hell? That was mad.’

But the aftermath isn’t too crazy

After winning the show, Rob took his old job back at Morrisons but revealed he did spend a few weeks being recognised by fans.

‘People do come up to you,’ he said. ‘But I just got my job back at Morrison’s to keep myself busy during Covid the day after, and this couple came in and she just screamed you’re from Hunted? [I thought] ‘Whoa, that was weird, when someone recognises you for the first time.