Why This Video Of Justin Bieber And Hailey Is Raising Eyebrows

Justin Bieber and Hailey Bieber have been refreshingly candid about the challenges of the first year of their marriage. Hailey told Vogue it was “really effing hard” in 2019, while Justin chalked their difficulties up to residual issues from his past to GQ in May, including his dalliance with drug use. “There was a lot, going back to the trauma stuff. There was just lack of trust. There was all these things that you don’t want to admit to the person that you’re with, because it’s scary,” the singer admitted, saying he was “on eggshells” during his first year of married life.

Revealing to Elle in March she and her husband have sought the aid of a marriage counselor, Hailey reflected that the hardships were all a part of the process. “I learn new things about him and about myself and about our relationship all the time. Do we have little fights and stuff that we have to work through sometimes? Yeah, of course, but it really doesn’t ever feel like work,” adding that “I’m not saying it’s this easy-peasy thing that doesn’t take work. We talk to a therapist. We do what we have to do.”

Given their self-confessed martial up and downs, some fans were alarmed at a Twitter video of the couple on July 11. Keep reading for eyewitness accounts of what really went down in the viral vid.

Was the viral Beiber video anger or 'adrenaline'? 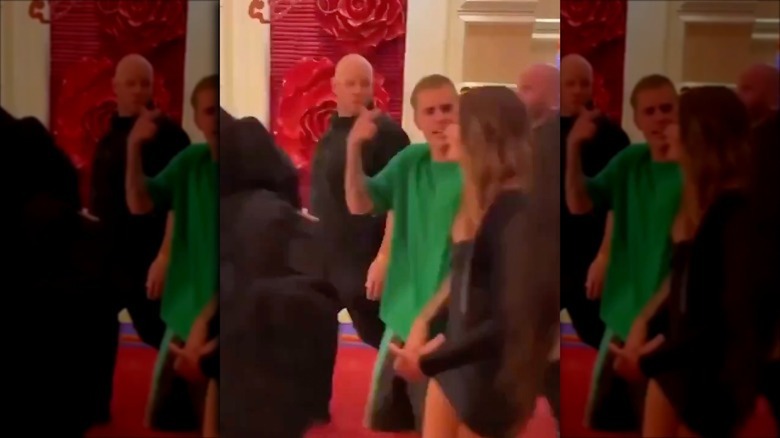 Is all as it seems in this July 11 viral video of Justin Bieber and Hailey Bieber in Las Vegas’ Wynn hotel? Surrounded by bountiful security, the married couple was seen leaving the swanky Delilah supper club in the video moments after Justin surprised the crowd with an unannounced performance, TooFab reported. Walking and talking, Justin gesticulated passionately and seemingly shouted at Hailey, but multiple eyewitnesses tweeted these were words of excitement, not anger.

One critical Twitter user wrote, “I asked my son… what it looked like Justin is doing in this video and he said he’s yelling because he’s angry.” Meanwhile, another user replied, “He was not yelling and we were there to witness what went down. He was all adrenaline. It doesn’t matter how the f*** it ‘appears’ to you. Dont spread false information on someone… That’s defamation of character.” Another fan tweeted evidence in Biebs’ defense via a self-taken video of his onstage energy, which displayed the same level of hyped enthusiasm as the later video. “I took this of Justin right before that video was taken. He was on STRAIGHT adrenaline from performing. He wasn’t mad at Hailey and he wasn’t yelling at her. I hate how he’s always painted as the bad guy when he’s the furthest thing from it,” the fan wrote.

Well, we’re certainly glad no actual altercation happened! At least, according to some fans with a discerning eye.

If you or someone you know is struggling with substance abuse and mental health, please contact SAMHSA’s 24-hour National Helpline at 1-800-662-HELP (4357).