What We Know About Lady Gagas Upcoming Appearance With Tony Bennett

As fans will already know, Lady Gaga and living legend Tony Bennett released a joint album together titled “Cheek to Cheek” in 2014. The LP topped the U.S. Billboard 200 and earned the iconic duo a Grammy Award for Best Traditional Pop Vocal Album. During an interview with Bennett for Parade in 2014, Gaga expressed that the “Because of You” hitmaker saved her life. “I tell Tony every day that he saved my life,” she said, adding, “I’m not going to say any names, but people get irrational when it comes to ­money – with how they treat you, with what they expect from you.”

“But if you help an artist, it doesn’t give you the right, once the artist is big, to take advantage of them…I was so sad. I couldn’t sleep. I felt dead. And then I spent a lot of time with Tony. He wanted nothing but my friendship and my voice,” the “Poker Face” chart-topper continued.

Since their collaborative album, it appears that Gaga and Bennett have remained friends over the years and will be reunited very soon for an upcoming performance and a new album. Keep reading to find out more. 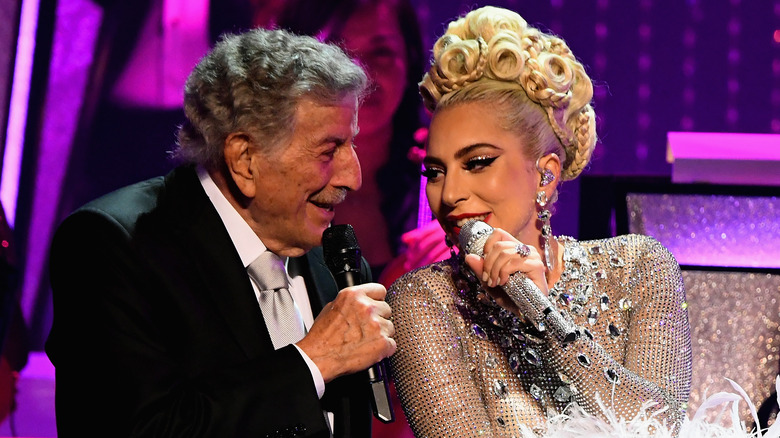 According to Music News, Lady Gaga and Tony Bennett are scheduled to sing together at an MTV Unplugged gig on July 2. The publication notes that the pair will sing their new unreleased songs that will apparently be included on the follow-up to their first LP, “Cheek to Cheek.”

“Come witness a new chapter in Unplugged’s history as Tony Bennett and Lady Gaga grace the Unplugged stage for the first time, performing fresh renditions off their brand new Jazz standards album – and a handful of surprises you definitely won’t want to miss,” a message on the ticketing website states, according to New York Post. The show will be filmed in New York and will contain an audience who will bring proof of a negative Covid-19 test taken that morning before entering the venue.

Four years ago, it was revealed that Bennett was diagnosed with Alzheimer’s disease. The award-winning star found out four years ago, but only started to show real signs of decline in 2018. His new album with Gaga was supposed to drop in the spring of 2021 and has yet to be released. As of this writing, the new record also remains untitled.

Elvis Presley: Linda Thompson shares rare footage of The King a year before his death