Home » What We Know About Cardi B And Normanis Collab What We Know About Cardi B And Normanis Collab

Since breaking through into the mainstream, Cardi B has actively released hits and dominated the music scene. To date, Cardi has only released one studio album, 2018’s “Invasion of Privacy.” The highly-anticipated LP lived up to its expectations and debuted at No. 1 on the US Billboard 200. With sales of more than 3 million in the US, it has been certified 3x platinum by the RIAA. At the Grammy Awards the following year, Cardi took home the golden trophy for Best Rap Album. As of this writing, Cardi has achieved five No. 1 singles and a total of nine top 10 hits on the US Hot 100.

Throughout Cardi’s career, she has collaborated with some powerhouse names. In 2018, she featured on Maroon 5’s chart-topper “Girls Like You” and Bruno Mars’ remix of “Finesse.” On her debut album, she bagged herself songs with Kehlani, Chance The Rapper, and SZA, to name a few. In 2020, her collab with fellow rapper Megan Thee Stallion, “WAP,” was named the best song of the year by Rolling Stone.

While fans wait for Cardi’s long-awaited sophomore album, she has announced a new single with former Fifth Harmony member Normani. Keep reading to find out more.

Cardi B's new single will be out very soon 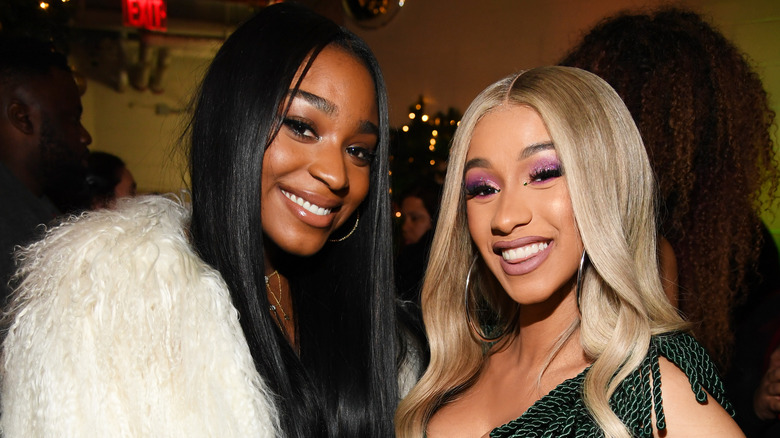 Along with expecting her second child with Migos member Offset, Cardi B has also been busy cooking up new music. In an Instagram post shared on July 14, Cardi announced she has a new single with Normani. The singer first rose to fame as one-fifth of the girl group Fifth Harmony and has since embarked on to her solo career. As noted by The Official Charts, Normani’s song with Cardi, titled “Wild Side,” is her first release since 2019’s “Motivation.”

With the announcement of the song, Cardi attached the eye-catching artwork. The duo was snapped sitting down on their side while rocking long dark hair. The pair appeared to be completely nude and went barefoot for the occasion. Cardi was photographed gazing up to her left while Normani kept her eyes closed. For her caption, Cardi told fans to get their “coins ready,” while stating the song will be released on July 15 at 9 p.m. PST.

In the span of nine hours, her post racked up more than 2.6 million likes and over 17,000 comments, proving to be very popular with her 100 million followers. “This cover is giving me number one vibes already,” one user wrote. “ITS ABOUT GIVE EVERYTHING AND BEYOND FOR ME,” another person shared passionately in capital letters. “Oh damn I was not ready,” remarked a third user. This is not the first time Cardi and Normani have worked together. In 2020, Normani appeared in her video for “WAP.”