Courtney Love seems to love a good musical feud. The latest target of the Hole frontwoman’s ire is “Driver’s License” hitmaker Olivia Rodrigo, whose freshman album “Sour” debuted at No. 1 on the Billboard 200 chart. Rodrigo might want to be ready to rumble, because one of Love’s biggest beefs has spanned decades.

There’s been a lot of bad blood between Love and Foo Fighters frontman Dave Grohl over the years. It stems from Grohl’s time performing with Love’s late husband, Kurt Cobain, as a member of the grunge band Nirvana. In 2001, Love sued Grohl over the rights to Nirvana’s assets. A little over a decade later, she took to Twitter to accuse him of trying to seduce her daughter, Frances Bean Cobain. Frances responded to the allegation by calling for Twitter to ban her mother (via Rolling Stone).

Hole guitarist Eric Erlandson told The Washington Post that Love threw candy at Bikini Kill frontwoman Kathleen Hanna and tried to slap her at Lollapalooza in 1995. According to Pitchfork, Love later called Hanna “a diy nonsense dilettante” in the comments section of a 2019 Instagram post.

And who can forget how Love deemed Gwen Stefani a “cheerleader,” possibly inspiring Stefani to write the song “Hollaback Girl”? Love further fanned the flames of their feud by telling Howard Stern that Stefani’s ex-husband Gavin Rossdale had an extramarital affair with her (via Us Weekly). Now it seems even more fitting that Rodrigo is a big fan of Stefani. But, what happened with Love and Rodrigo exactly? 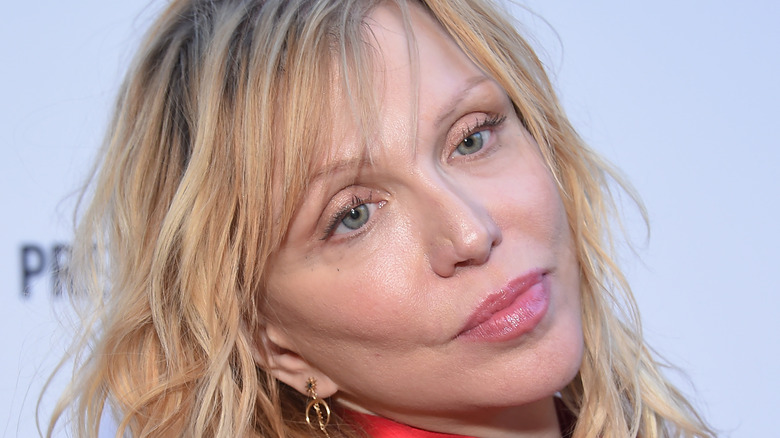 As reported by People, Courtney Love noticed that a piece of art for Olivia Rodrigo’s “Sour Prom Concert Film” bore a striking resemblance to the image used on the cover of the 1994 Hole album “Live Through This.” And in true Love fashion, she took to social media to air her grievances with Rodrigo.

On Facebook, Love shared the offending photo of Rodrigo, which showed her dressed as a tearful prom queen, complete with tiara, running mascara, and a bouquet of flowers. “Spot the difference!” her caption read. The Hole album picture, which was taken by photographer Ellen von Unwerth, also featured all three of these elements. While interacting with her Facebook followers, Love pushed back against claims that her own picture was inspired by the movie “Carrie,” writing that it was her “original idea.”

Love also took Rodrigo to task for not reaching out to her before seemingly paying homage to the album photo. “It was rude of her,” she wrote, adding that “manners is manners !” She suggested that Rodrigo’s record label, Geffen Records, deserves most of the blame, but she’s expecting an apologetic bouquet of flowers from the singer. “It’s on GEFFEN . I’ve informed her I await her flowers snd [sic] note,” she wrote. “I sure hope it’s long . Does Disney teach kids reading and writing ? God knows. Let’s see . Yes this is rude.” When it comes to Love, imitation clearly isn’t the best form of flattery.

'Looney Tunes Cartoons' Season 2 Trailer: The Gang is Back with More Zany Shorts Next Month