Despite being ordered by the court not to talk about the ‘Savage’ raptress, the ‘LUV’ spitter brings up their legal drama in his new song titled ‘Mucky James’, in which he also name drops Meek Mill and Kehlani.

AceShowbiz –Tory Lanez has made it clear no one can stop him. The “Say It” rapper has vowed to keep saying “whatever the f**k” he wants to after addressing Megan Thee Stallion drama in his new song titled “Mucky James” despite being ordered by the court not to talk about her in any way moving forward.

Making use of his Twitter account on Sunday, April 10, the “LUV” spitter wrote, “I’ll say whatever the f**k I like to …. And feel no way about it.” He further stressed, “We get so scared of how people take our opinions on these apps that we forget our own freedom to the thoughts we think . Have your freedom of speech unapologetically.”

In a separate tweet, Tory reminded his fans and followers to keep being “true” to themselves. The 29-year-old hip-hop star further reasoned, “Cuz anything otherwise isn’t real or comfortable.” 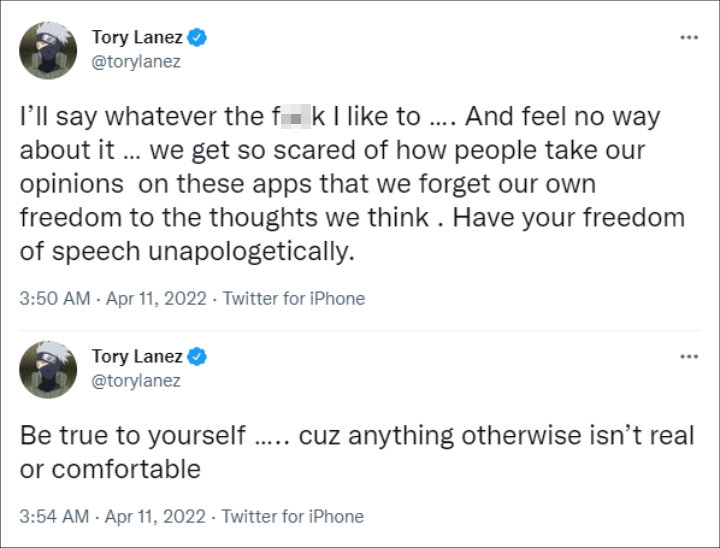 Tory Lanez talked about having ‘freedom of speech’ after bringing up Megan Thee Stallion legal drama in his new song ‘Mucky James’.

His social media posts came after Tory released a new song, “Mucky James”. Tory, who was recently handcuffed in a Los Angeles courtroom after a judge found he violated the protective order in his case with Megan, addressed the legal drama in his new track.

“They try to blackball me for money but I ain’t goin’ out/ I told myself I’ll stop this bulls**t and not speak up more/ I had to go through way more bulls**t **** door,” Tory raps. “And these b***hes tried to play me out like they ain’t know my name, yeah, uh.”

Elsewhere in his song, Tory mentions his fallouts with Meek Mill and Kehlani, both of which stemmed from the shooting incident involving Megan. “Not one of them n****s that be fakin’ what he feeling, I’m gon’ talk about it/ Meek Mill, he used to be my dawg, he did some flaw s**t to me/ And when I brought it up, lil’ cuh wouldn’t even talk about it,” Tory spits. “Ain’t beefin’ with you cuh, I swear I’m more hurt than anything/ I’m at this point in life where I don’t stress the petty thing.”

On Kehlani, who took him off her album after the shooting incident, Tory raps, “Sometimes I think ’bout Kehlani and how we ended things.” He adds, “When I express myself I know that I can choose my words lil’ better.”