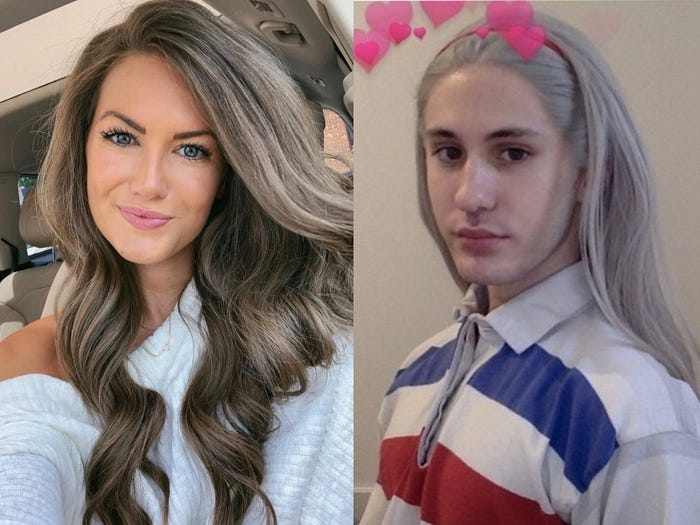 An influencer who went viral after being featured in the notorious "Christian Girl Autumn" meme is giving back and rallying behind the creator who made her an internet fixture.

In the summer of 2019, Natasha, a then-19-year-old creative writing student in New York City, found herself googling photos of "fall outfits from 2012," hoping to incorporate the distinct look into a meme. In her search, she came across a photo of two women sporting patterned scarves, matching totes, and leather ankle boots — and she decided to "troll" her followers with the image.

"Hot Girl Summer is coming to an end," she wrote in a tweet accompanying the photo, referencing the hit song by Megan Thee Stallion which had instantly become a meme earlier that summer. "Get ready for Christian Girl Autumn."

The new take on the meme took off, receiving nearly 50,000 likes and prompting thousands of responses mocking the "basic" fall aesthetic.

Some commenters shared their assumptions about the women and offered their thoughts on Christianity, intolerance, privilege, and white womanhood.

"This picture thinks Africa is a country and is going on a mission trip there in 2020," one Twitter user commented.

"This picture asked me not to kiss another man in public and if I could please leave the restaurant," another quipped.

The women from the photo took their viral moment in stride

‘Tis the season to be basic… 🍁🍂🎃💕 Can y’all believe this sweater is only $17?! It comes in a bunch of colors! I got it in pink also 🤗 Sooo good to be reunited with my husband this weekend! We are making chili in the crockpot and going shopping for a new refrigerator this morning (#marriedlife) lol! Outfit details in the LIKEtoKNOW.it app! http://liketk.it/2F7CJ #LTKunder100 #LTKunder50 #LTKtravel #LTKshoecrush #LTKitbag #pumpkins #autumn

The two women in the photo, unwitting subjects of the viral trend, were lifestyle bloggers Emily Gemma and Caitlin Covington. The pair met in Charlotte, North Carolina in 2013 after starting their businesses, BuzzFeed reported, and the newly famous photo was taken in 2016 when the women were shooting "fall content" for their platforms.

The women understood some of the amusement; Covington told Insider, "I can't deny that I love fall and everything that goes along with it! When it comes to fall, I totally admit to being 'basic,' and I'm okay with that." But they also hoped to clear up some of the other assumptions appearing in the comments section, specifically comments suggesting they were bigoted.

"I'm a daughter, friend, wife, and an expecting mother. I'm a gay rights and Black Lives Matter supporter, and I think all people should be accepted for who they are," Covington said. "I think if someone sat down with me for fifteen minutes, they would see that, too."

The two bloggers, who accrued thousands of new followers after going viral, also communicated with the meme creator responsible for the recent boost in visibility.

Gemma and Covington, Natasha told Insider, were kind to her and found the humor in their viral moment.

"They were both incredibly nice and lighthearted about the whole situation!" Natasha recalled. "They both wanted to get Starbucks with me one day!"

Covington, Natasha added, even told her that they were "best friends forever."

"I thought her meme was creative and funny," Covington recalled. "There was a lot of media coverage last year and I ended up gaining a lot of followers on Twitter because of it! She's always been kind to me, and I feel like we'll always share a connection because of the meme."

Covington and Gemma also shared the meme and jokes about their aesthetic, winning over a skeptical Twitter audience.

Covington went on to clarify her political views in several responses to commenters' questions.

A year after the viral moment, Covington is sharing her support for Natasha.

While viral fame hasn't changed much for Natasha — most people don't even know she started the trend, she says — she has made some strides in her personal life, including making the decision to socially transition.

"I started my transition after taking the time in quarantine to look at myself and what I wanted from life," she said.

Transitioning, however, proved to be an expensive endeavor, she said, due to medical bills and the cost of hormones, electrolysis, and possible surgeries that will "help [her] feel like the person [she] sees in [her] head."

To cover some of her expenses, Natasha started a GoFundMe and shared the link with her followers.

Soon after, Covington retweeted the link.

"FYI this is the creator of the Christian Girl Autumn meme," she wrote. "Please help & donate to the Go Fund Me if you can!"

Covington says she'd followed Natasha's journey on social media and wanted to do her part to support her friend.

"Natasha has been vulnerable about her transition and about the struggle to be accepted by her friends and family, which I think is so courageous," she said. "I support her decision 100% — I am always in favor of people embracing who they really are and to feel confident in their own skin and find happiness."

Natasha says it was "amazing" to see Covington's participation.

"I wasn't expecting that much, and I immediately felt so grateful she had even shared the post on her platform," she said. "Caitlin's such an amazing woman and has an endless supply of kindness."

Covington hopes her followers will embrace her approach of acceptance and support.

For the social media users who level hate and negativity, Covington has some advice.

"Go buy a pumpkin spice latte — it will bring some joy, I promise."