Paul Kelly has been hotly tipped as the headline act for this year's AFL grand final pre-match entertainment, a gig that surely qualifies as one of the toughest in the world of music.

The 64-year-old Melbourne-based singer-songwriter is expected to perform at the Melbourne Cricket Ground on September 28, playing a short set that's almost guaranteed to include the 1986 song Leaps and Bounds, in which he sings of being "high on the hill, looking over the bridge to the MCG". 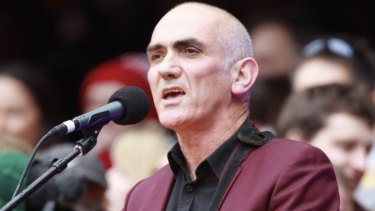 Kelly's appearance will be his second at a grand final following 2012, when he shared the stage with You Am I frontman and fellow footy fan Tim Rogers.

Younger fans will be catered to with support from dance-pop outfit Tones and I and Dean Lewis, the Sydney singer-songwriter whose break-up anthem Be Alright spent five weeks atop the ARIA chart last year.

This year's all-Australian line-up was first flagged on 3AW’s Rumour File on Wednesday morning. At the time of writing neither the AFL nor Kelly's label, Mushroom, had confirmed the gig. 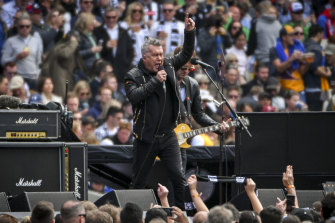 The radio station boasted this was the fifth time in recent years breakfast hosts Ross Stevenson and John Burns have had the scoop on the pre-match line-up, having correctly announced Jimmy Barnes and the Black Eyed Peas last year, The Killers in 2017, Sting in 2016 and Tom Jones in 2014. Their source was apparently on holidays in 2015, when Chris Isaak, Ellie Goulding, Bryan Adams and Mike Brady – performing Up There Cazaly – shared the stage.

Playing the grand final is undoubtedly an honour, but it can also be something of a curse, with acts contending with terrible acoustics, swirling wind, and an audience of 100,000 in the stadium and millions more at home often wishing they'd just get on with the game. Jimmy Barnes' performance last year was notable for the fact it actually worked. Meat Loaf's in 2011 was unforgettable for the fact it did not.

The choice of line-up is often dictated by who is in the country and match-fit, which usually means touring or about to tour. Kelly ticks the boxes, with a new multi-disc collection, Songs From the South 1985-2019, to be released in November ahead of a short tour the following month. Tickets for that tour went on sale last week. 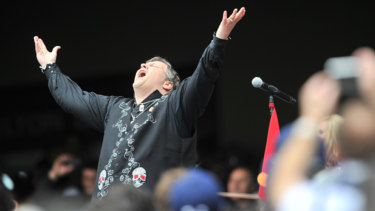 Meat Loaf left a bad taste in the mouth after performing at the AFL grand final in 2011.Credit:Joe Armao

International acts have not always been well-received at the grand final, but this year they are in short supply anyway: Kris Kristofferson will be here on tour, but the country legend has a gig in Thirroul, near Wollongong, on the night of the final. Still, it's likely he could afford a charter flight to whisk him from Essendon Airport to the NSW coast in time for a pre-show schnitzel.

Film score composer Hans Zimmer will be touring too, and no stranger to stadium shows – in early October he is playing Qudos Bank Arena in Sydney, the Entertainment Centre in Brisbane and Rod Laver Arena in Melbourne. But the prospect of an AFL crowd sitting enraptured by musical excerpts from Blade Runner 2049 and Interstellar seems a stretch.

Who Is Breeda Wool from 'Mr. Mercedes'?

Who is Flume? Aussie DJ and producer who performed x-rated sex act on stage at Burning Man festival
Recent Posts