Hello, we’ve waited here for this. Foo Fighters’ sold out, full-capacity Madison Square Garden show welcomed back more than just live music in New York City. Over three loud, sweaty, emotional and supremely fun hours, the band ushered back in the exhilarating familiarity of our pasts, giving an experience many music fans feared wouldn’t come back for a much longer time.

Even before getting into the venue, the scene outside MSG was its own brand of weird. The queued audience members carried normal Covid anxieties: some were masked as many eased into what would become New York’s largest indoor concert since March 2020. Hovering over the line, a small group of protestors touted signs that railed against both the vaccine (“VACCINES CONTAIN PETROLEUM,” read one) and the Excelsior Pass, the NYC-only digital “passport” that provides proof of vaccination and was required for entry at the show. (“MSG & Foo Fighters Complicit in Crimes Against Humanity,” one sign said adorned with a needle and skull.) Another sign invoked Dave Grohl’s late Nirvana bandmate Kurt Cobain, claiming he would be “Rock ’N’ Rollin’ Over,” which does a lot of work in just assuming that Cobain would be both anti-vaccine and a Covid conspiracy theorist.

The weird vibes outside washed away once inside: the Excelsior Pass check didn’t add any extra hassle to the sometimes tedious hoops to jump through before entering any concert venue. It bodes well for the coming future of indoor concert safety, which will likely necessitate other versions of the “passport” on a national or global level. The scene inside was more relaxed and carried on as if no time had passed at all. One older couple apologized for their exuberance on their first “big night out” in a long time, as if we all weren’t feeling that same type of nervous but thrilling energy of being inside with tens of thousands of strangers once again.

With no opening act, Foo Fighters fittingly eased into the show with a stripped down “Times Like These” that built into a boisterous, full-band experience. The first three tracks were a thunderous “welcome home” to the crowd and to the band themselves, with “The Pretender” and “Learn to Fly” rounding it out. It was truly a sea of bodies, with the GA standing room section packed to the brim with people politely honoring the fact that maybe not everyone was ready to open up this pit. Instead, the almost synchronized-looking jumping and arm-pumping was a sight to behold. 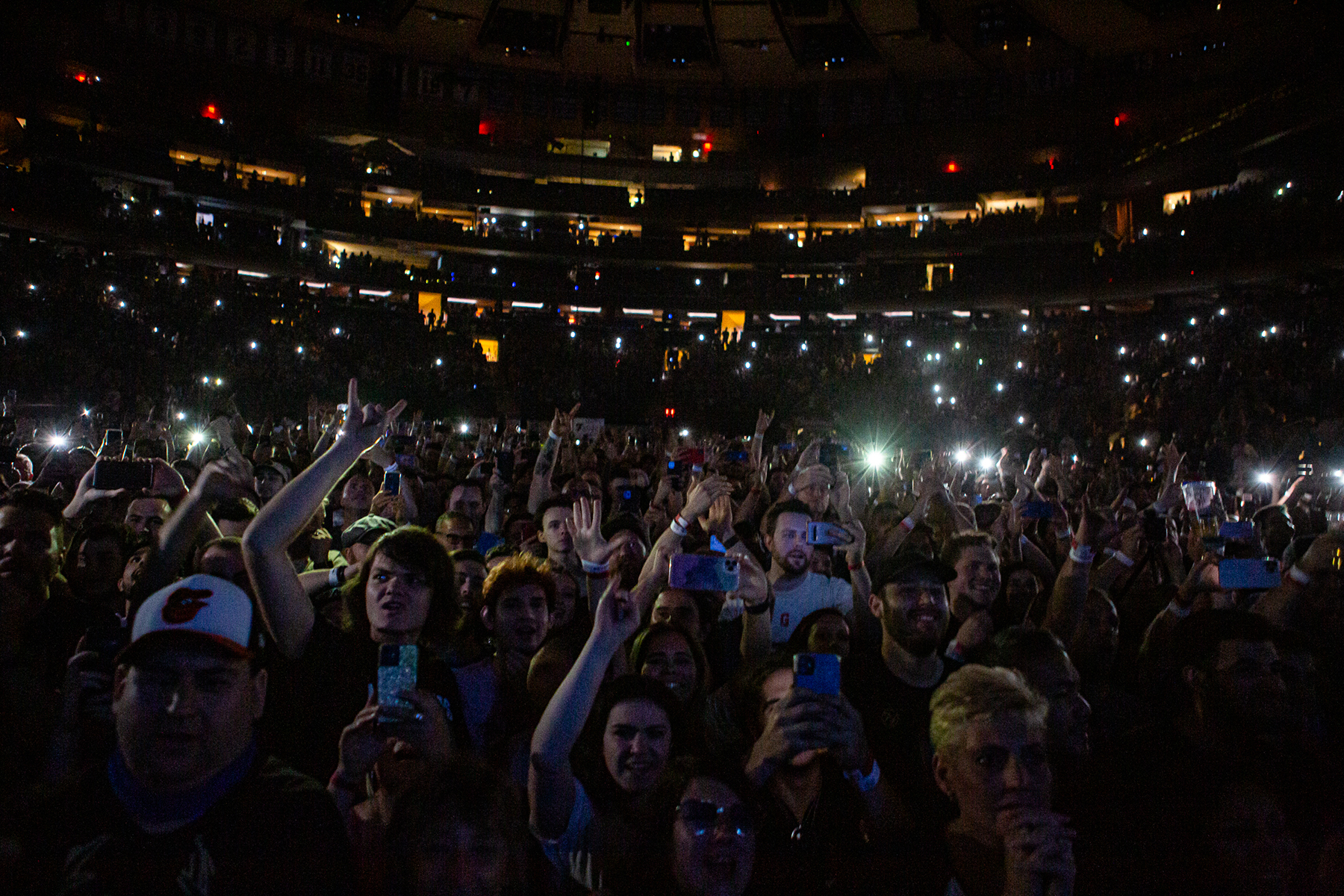 Fans react as the Foo Fighters take to the stage for the first full capacity concert in over a year at Madison Square Garden.

The rest of the show was a masterclass in how to build a set list for a night like this. Not a single hit went untouched, and there were plenty of deep cuts to appease older fans of the band; “Aurora” and “This Is a Call” were late-set highlights. Grohl was drenched in sweat within the twenty minutes of the show, keeping the energy at 11 from start to finish. There was no time or need for more stripped-down moments or breaks: this was the “return of rock & roll” at The Garden, and the genre’s personal caretaker (and, often, generational doula) was not about to let the crowd forget that for one second.

Being that this was the First Big Show Back, there were a few tricks up the Foos’ sleeves. Drummer Taylor Hawkins swapped places with Grohl to cover Queen’s “Somebody to Love,” which served as an excellent showcase of his own singing skills as well as an opportunity for the karaoke-missing members of the crowd to see if they too still got it. Later, during the encore, the band covered the Bee Gees’ “You Should Be Dancing,” making for the live debut of “The Dee Gees.” (The group’s disco alter ego will release the album Hail Satin on July 17th as a Record Store Day exclusive.) Long before they performed the song, Barry Gibb’s face had a prominent role in the show, replacing the group’s logo as Hawkins’ drum cover.

The biggest surprise, though, came via a very special guest: Dave Chappelle. The group were musical guests on the Chappelle-hosted post-election episode of Saturday Night Live in November, but on Sunday night, Chappelle unofficially fronted the Foos. The comedian performed Radiohead’s “Creep” with no further explanation, arriving and exiting the stage like a mirage we all collectively hallucinated. Even more shocking was the fact that Chappelle (a longtime “Creep” fan) was excellent at belting out the Nineties megahit, another grand tribute to the hours of karaoke we’ve missed out on over the last year.

Throughout the night, Grohl was acutely aware of the show’s unique, historic status. “For the last year, I had this reoccurring dream that I would fuckin’ walk onstage and we would look at each other for the first time,” Grohl told the crowd in the middle of “Best of You. “And it would take a couple of minutes, where we just look at each other like, ‘Thank God we got here tonight.’ I fuckin’ walk out onstage tonight. It was just like that fuckin’ dream.”

Because Foo Fighters are most at home in an arena, there are a number of loaded, “new normal” double-meanings that could be placed on most of their big hits. “Times Like These” and “My Hero” felt especially profound during the set. But concert closer “Everlong” may be the most apt: who knew that anything could ever feel this real or be this good again. It wasn’t just the return of rock to the Garden; it was a return to joy. What a pleasure to sing along with you.