“Stranger Things” actor David Harbour and chart-topping British singer Lily Allen tied the knot in September 2020 after making their relationship official to the public in October 2019, per Cosmopolitan. After the duo took a vacation with Allen’s two daughters, Ethel and Marnie Cooper, they exchanged vows at the Graceland Wedding Chapel in Las Vegas in a small ceremony that was led by an Elvis Presley impersonator.

Allen took to Instagram to share the exciting news with her 1.5 million followers. The iconic snapshot saw the BRIT award-winner with Harbour inside the venue, while the Elvis impersonator appeared to be officiating their big day. Allen stunned in an elegant, short white dress that featured black buttons on the front. She wrapped a thin white belt across the front and styled her dark locks up with full fringe. Placed on top was a traditional white veil that gave her look its finishing touch. According to Hello!, Allen’s dress was designed by Dior.

Allen has since expressed how she feels about being married to her Hollywood actor husband during an Instagram Q&A in April 2021. “You know, it’s kind of fab. I can’t complain. My husband is a delight and I’m feeling pretty good these days,” A said, per Cosmopolitan. During a recent podcast interview, Harbour himself explained the best thing about his intimate wedding to Allen. Keep reading to find out more. 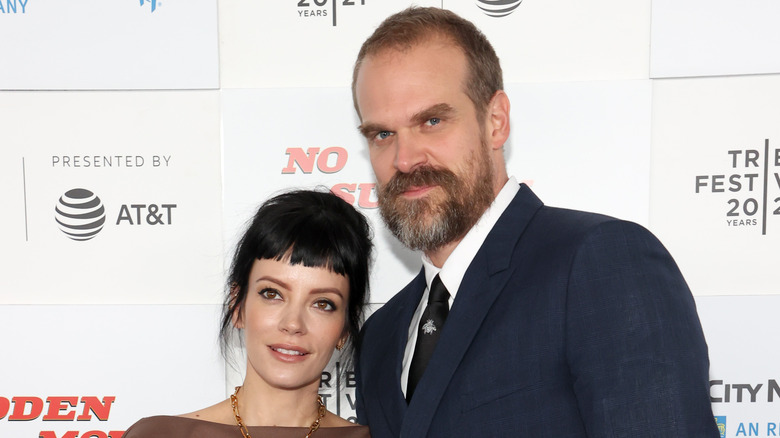 During an appearance on “The Jess Cagle Podcast” with Julia Cunningham, David Harbour opened up about his intimate wedding with “Not Fair” hitmaker Lily Allen. As previously noted by Hello!, the only other guests in attendance were Allen’s two daughters, Ethel and Marnie Cooper, whom she shares with her first husband, Sam Cooper.

“Las Vegas, it’s fantastic, they’ll do it in an hour, you can drive through, what is annoying though is they will tweet it out!” Harbout said, per Ace Showbiz. “I gotta say, man, I highly recommend getting married in Las Vegas, especially with Elvis in a global pandemic, under the ashen skies of Las Vegas as the wildfires burn and the smoke coats all of Nevada.”

Even though the coronavirus pandemic may have had something to do with the wedding’s lack of guests, Harbour admits he preferred it that way. “It was a very surreal experience, to say the least, but the one great thing about sort of eloping to Vegas is you don’t have to invite all those annoying people that you know,” he admitted, adding, “Like, you make a list and you’re like, ‘Oh, these people are gonna want to be invited and we’re gonna have to sit her next to him and…'”

“We went to In-N-Out Burger afterwards for our reception,” he continued. “It was just so pure and joyous and what it was and I just loved it. I highly recommend it.”