The 24-year-old ‘No More Parties’ femcee also takes to her Twitter account to hit back at the haters as she writes, ‘Don’t forget, I still never dropped an album.’

AceShowbiz –Coi Leray is among young rappers who are rising in the hip-hop community. However, that doesn’t mean that she doesn’t face any criticism. Instead, the backlash often stems from the fact that her father is Benzino. Most recently, she faced scrutiny online after XXL Freshman released her freestyle on Monday, July 5.

The “No More Parties” femcee opened up about her trust issues, family and pain in her lyrics. “I’m not poppin’ out ’til I got a couple Ms sittin’ right in my bank account/ And my family dependin’ on me, I’m the one that’s gon’ make it out,” Coi raps. “I’m so paranoid, I think everybody gonna snake me out/ I think everybody out to get me now/ So that’s why I’m geeked up off this Henny now.”

“Yeah, I’m numbin’ the pain, I don’t feel it now/ And I got ’em so mad ’cause I’m winnin’ now/ Yeah, the glock on my waist I might air it out/ Fit it right in my purse, I don’t wear it out/ Make sure the bag matchin’ my shoes, they Maison Margiela, my chains I’ma wear ’em out,” she continues. “Fell in love with this money, yeah I count it in my sleep/ Avianne this water, yeah, he got it from the sea.”

Seemingly defending Coi from haters, her brother posted on Instagram, “Ya don’t know what goes on behind closed doors and how badly some family’s struggle. People be so quick to assume on how somebody’s life was growing up when MFS don’t know s**t.” Coi then reposted it and added, “My baby bro.”

She also took to her Twitter account to hit back at the haters. “Don’t forget, I still never dropped an album,” Coi said. Referencing to Nicki Minaj‘s verse on “Monster”, she added in a separated tweet, “What nicki say? 50k for a verse no album out ?” 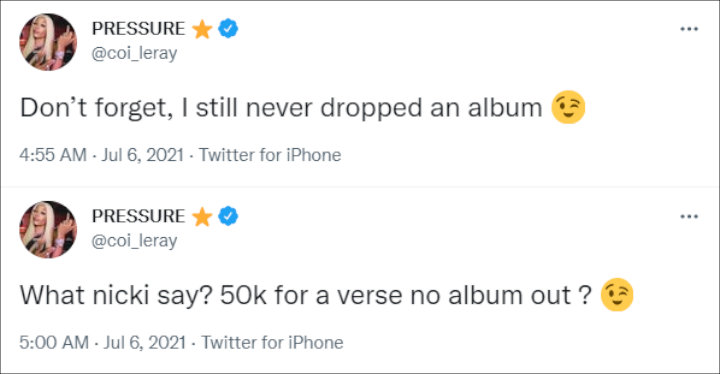 In an interview with the magazine, she dubbed that being included in 2021 XXL Freshman “an appreciation stamp.” The Republic Records femcee shared, “When I first got the call, I already knew I was going to be a Freshman. I put in the work, for real, for real. I went platinum in less than three months, my numbers are crazy. We got over [55] million views on YouTube alone, which is to the ‘No More Parties’ video.”

The 24-year-old star continued, “And besides what I have been dropping, I’ve been hopping on remixes like Pressa‘s ‘Attachments,’ from Canada, which is going crazy; DDG‘s “Impatient’, which we just dropped a video, which is going crazy. There are so many more people that I have been working with and just everything that I’ve been doing. I knew it was going to happen. I was destined to greatness. It was only a matter of time. Timing is everything, you know?”