Home » Yes, it’s The Flying Doctors in new scrubs but RFDS is really rather good Yes, it’s The Flying Doctors in new scrubs but RFDS is really rather good

RFDS lands on our screens like a comforting and welcome visitor from the past. It’s not exactly ground-breaking, but this eight-part scripted series about the Royal Flying Doctor Service is rock-solid, character-driven, drama-dripping television that oozes Aussieness from its every pore. It sits somewhere between soap and limited series, and it feels utterly, wholesomely satisfying. In short, it’s really – if a little surprisingly – rather good.

You might loosely consider RFDS an update of The Flying Doctors, which ran for 221 episodes on Nine between 1986 and 1992 and played widely around the world (the new show, created by actor-writer Ian Meadows and producers Mark Fennessy and Imogen Banks, has already been sold to the US, the UK, Sweden, Belgium, New Zealand and the Netherlands). But as good as RFDS is, such a lengthy run is impossible to imagine now – the ground has simply shifted too much, with the free-to-air networks seeing reality as a far better return on investment than drama (and the fact ad-free streaming has dragged viewers away in droves makes that argument hard to resist). 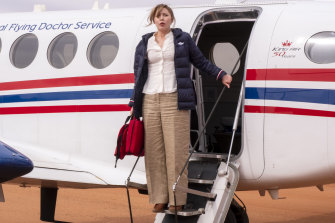 Shock of the new: Emma Hamilton plays Eliza Harrod, a doctor who relocates from London to Broken Hill in RFDS. Credit:Seven

And yet, oddly, I reckon RFDS has benefited from reality TV. Audiences are now so schooled in the language and behaviour of real-life medicos thanks to the likes of RPA and Medical Emergency that ob-doc-style veracity is pretty much obligatory if a drama is to pass the pub test. RFDS does so with ease.

Of course, viewers also want characters and plot lines and romances and all the rest, not just emergency intubations at 20,000 feet. And RFDS largely nails that stuff too.

Leading the way are Emma Hamilton as an English doctor who has relocated with her teenage son to Broken Hill following a disastrous marriage break-up (her surgeon husband was guilty of a #MeToo infraction in the London hospital where they both worked), and Stephen Peacocke as the nurse with whom she is paired and to whom, inevitably, she is attracted. But technically she’s his boss, so if/when they do the birdy with two backs, is that a #MeToo moment too? Hmm.

Not that RFDS gets bogged down in such questions. On the basis of the four episodes I’ve watched, I’d say it circles around the big meaty topics such as rural debt, depression and suicide, stoicism and its link to untreated health issues, isolation and climate without ever landing too heavily on them. They inform the drama, and they’re far more than token issues of the week, but they’re unlikely to burden viewers too much. 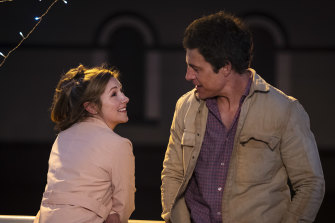 There’s a big and impressive ensemble cast but at the heart of everything are Emma Hamilton and Stephen Peacocke.Credit:Seven

That’s not to say it’s light-on. There are lives saved and lives lost, and each of them feels like it means something. There’s drought, dust storms and drag queens – the setting being Broken Hill, there’s even a Priscilla tourism experience – and it all rings pretty true. If I’m being completely honest, I’d have to admit I’ve been close to tears more than once.

There’s room for improvement, or at the least for growth: I’d like to see more storylines for Rob Collins’ doctor; Justine Clarke’s base manager has too little to do; and if Jack Scott’s Matty is meant to be gay, can we just stop being coy about it?

But overall, this is a genuinely welcome addition to the airwaves. You’re clear for take-off, RFDS. Have a safe flight.