Yeah nah humbug: A Christmas Carol gets the Australian treatment

Charles Dickens’ treasured novella A Christmas Carol has been retold in innumerable ways, from a Muppet movie musical and a Looney Tunes cartoon to a radio play featuring Laurence Olivier as Scrooge. In the latest work from Victorian Opera, Victorian-era London is swapped out for a contemporary vision of the sun-soaked Victorian capital, Melbourne, complete with emos hanging out at Flinders Station and a surf life-saving Santa. 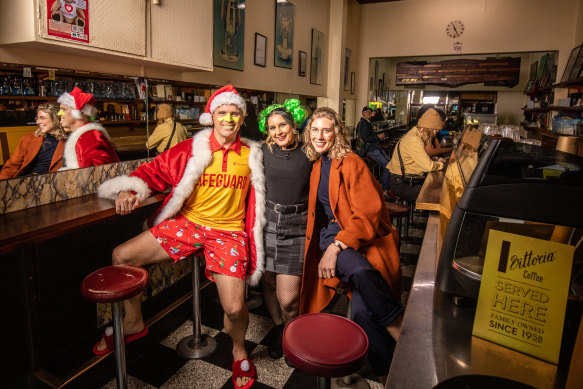 Many of Melbourne’s most iconic haunts have been woven into the story subtly. “We’ve gone for the Easter egg idea, so you get a feel for the city that’s more like a combination rather than specific places,” Smith says. “So there’s a scene set in an Italian deli that feels a little like Lygon Street and a bit like Pellegrini’s, and we’ve got a bookshop which we’ve cheekily named Mountain of Joy [a nod to Bourke Street stalwart Hill of Content]. I think there’s more power in alluding to certain places rather than trying to accurately depict them.”

So set designer Claudia Mirabello melds hints of much-loved hangouts into the look of the show and costumer designer Bridget Milesi similarly riffs off of Melbourne archetypes, with Akansha Hungenahally’s Martha Cratchit a nod to Flinders Street goths. The show is staged in St Kilda institution the Palais Theatre and features the vocal talents of local choir groups The Decibelles and Low Rez alongside the opera singers and a chorus of kids, accompanied by Orchestra Victoria. “It has been such a joy to work with these choruses and the enthusiasm and energy that they bring to the show,” Smith says. “These are people who live and work in Melbourne and have a real connection to this place. Particularly after the lockdowns, the idea of social connection and community has taken on new meaning.”

Keen ears will pick out much-loved Christmas classics woven into Koehne’s score. “Graham has written a fugue of carols that overlap in the opening scene,” Smith says. “You’ll pick out songs like Good King Wenceslas and We Wish You a Merry Christmas as well as a bit of Jingle Bells,” Smith says. “It’s got this beautiful festive spirit.”

In keeping with this patchwork of ideas, the story’s thematic arc gets a bit of an overhaul, too. “Poverty looks different in contemporary Melbourne society, compared to Victorian England,” Smith says of this new spin on the Cratchit family’s travails. “It still exists. It’s just got a very different face.”

They’ve tweaked Dundas’ role, too. “We’ve really leaned into exploring the idea of Scrooge as miserly, but not out for material gain,” Smith adds. “He’s a workaholic who’s working while Marley (Meadows) is dying. What kind of person does that in modern society? We’ve taken quite a deep look into why he is so horrible and hates Christmas so much, rather than taking it at face value that he’s just a terrible person.”

And in a very on-brand resolution of the long-simmering rivalry between world-renowned Australian cities, Smith says Goldsworthy borrowed a little bit of Sydney for her surf life-saving Santa. “That’s inspired by our love of the Christmas episodes of Bondi Rescue,” Smith chuckles.

Speaking of rivalries, is Smith worried that they’re going head-to-head with the Old Vic’s more traditional take on A Christmas Carol at the Comedy Theatre, starring David Wenham as Scrooge? “Everyone keeps saying to me, ‘How was it working with David?’ And I’m like ‘oh, no, we’re the other one’,” Smith laughs uproariously. “I’m glad it’s on for a bit longer, so when we’ve wrapped this, I can go and see it. Our show is very different, so you could happily come to both.”

Victorian Opera’s A Christmas Carol is on at the Palais Theatre from December 14 to 17.