There’s surely a film to be made about the exploits of Virginia Hall, whose wartime sobriquet was "the limping lady”. Born in Baltimore, the well-educated Hall travelled in the 1930s to Europe where a decade later she became an Allied spy, rescuing British airmen stranded in occupied France and helping to organise the Resistance – all this despite a pre-war shooting accident that forced her to rely on a prosthetic leg (which she nicknamed “Cuthbert”).

Likewise, there’s got to be a film in the life of Hall’s fellow spy Noor Inayat Khan, a Russian-born Sufi pacifist who trained as a wireless operator in Britain before being dispatched to France, where she was captured by the Gestapo in 1943. Indeed, Khan has already been portrayed in several works of fiction, including a recent episode of Doctor Who. 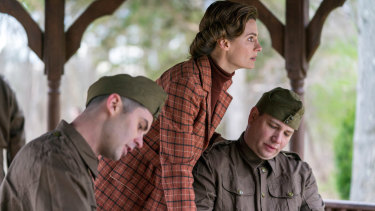 Given the fascinating source material, there’s no excuse for the dullness of A Call to Spy.

Weaving these two stories into a single narrative seems more of a challenge, given that Hall and Khan had no particular connection except that both were among the thousands of women who aided the British war effort as part of the undercover organisation known as the Special Operations Executive. To paint this wider picture, an anthology TV series might be a better bet.

Still, given the potential of the material, there’s no excuse for the dullness of A Call To Spy, a film as clumsy as its title. While the first-time director Lydia Dean Pilcher has worked for decades as a producer, she doesn’t seem to have much practical sense of what constitutes drama. Nor does she get much help from screenwriter Sarah Megan Thomas, who also stars as Hall: Thomas reportedly researched this script for years, and it shows in all the wrong ways. 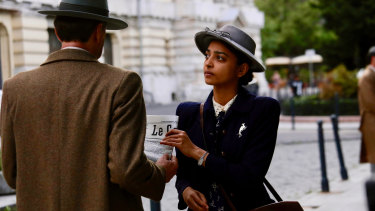 A Call to Spy opens on Boxing Day.

In other words, the conventions of genre cinema are set aside: spectacle is minimised, but so is exploration of the psychological costs of putting on an act. Instead, the emphasis is on a copybook feminism which implies these women should be remembered as pioneers, whether or not female spies were all that much of a novelty even then.

The plucky, never-say-die spirit which the film celebrates is embodied by a third protagonist taken from life, intelligence officer Vera Atkins (Stana Katic) – a stylish figure who smokes briskly, talks back to her patronising male bosses, and generally resembles the more glamorous sort of fictional headmistress.

For the sake of narrative convenience, Atkins is portrayed as personally recruiting both the stoic Hall and the younger, more vulnerable Khan, at around the same moment. Her two protegees arrive in France roughly 40 minutes into the film, which from that point on cuts back and forth between them, though without conveying much sense of mounting excitement or purpose.

Things happen one after another, in roughly the order the historical record says they did – and the pacing has a plodding telemovie consistency, with few scenes lasting more than a minute or two. Most of the action consists of conversations in dimly lit interiors, with background detail often blurred in a manner perhaps necessitated by the low budget (the locations were mainly in Philadelphia, of all places, with some exteriors in Budapest).

For a film about subterfuge, the oddest thing is the blatancy of it all. Thomas’ performance in particular has its share of what is sometimes called “indicating”: when her character is supposed to be worried, she conscientiously assumes a worried look. As a writer, she's similarly averse to subtext, presuming that the easiest way to tell us what the characters are thinking is to have them announce it out loud.

The problem is that if you can’t manage emotional realism, mere historical accuracy seems beside the point. While A Call To Spy is too restrained to qualify as full-blown camp, there are occasional moments of inadvertent self-parody, mostly when the actors are given lines it's hard to imagine anybody saying in life.

One example goes to Katic, late in the piece: “This war has left no one unscathed.” But the most shameless bits of forced exposition belong to Linus Roache as Atkins’ pompous superior, whose plonking delivery sometimes recalls the TV comic David Mitchell: “My previous job at a French motor company certainly didn’t prepare me for this.”

A Call to Spy opens on Boxing Day.

'Love & Hip Hop': Why a Couple From the Show Practiced Celibacy
Recent Posts

Drummer Simon Phillips on His Years With the Who, Mick Jagger, Jimmy Page, and Toto
01/21/2021

Where is Cher Lloyd now? The star’s life from X Factor’s ‘most hated teen’ to loving mother
01/21/2021
Categories
We and our partners use cookies on this site to improve our service, perform analytics, personalize advertising, measure advertising performance, and remember website preferences.Ok