Woman supposedly spots her brother-in-law cheating on his wife

Woman claims to spot her brother-in-law of TWENTY years cheating on his wife over Snapchat… but should she say anything?

An Australian woman is torn about whether to speak out after supposedly seeing her brother-in-law of 20 years Snapchatting a woman ‘that isn’t his wife’.

She spotted her brother-in-law talking to another woman on the photo sharing app and believes the woman replied by saying ‘I love you’, but can’t be sure.

She reached out to the Uncut Podcast on Instagram to anonymously ask whether she should confront him about it.

‘I caught a glimpse of a Snapchat conversation that my brother in law of 20 years was having with someone that is not my sister,’ she said.

Should the woman say something about her suspicions?

Should the woman say something about her suspicions?

‘I’m not sure what to do based on me being not entirely sure what I saw.’

The question proved divisive and has split the internet about whether she should say anything or not.

Many users felt the woman had to say something.

‘Yeah – if you have been married for twenty years – even if you got married at twenty – your 40 years old – why the hell are you using Snapchat unless it’s for something dodgy,’ one woman said.

‘Who is married 20 years and has Snapchat unless they’re using it for affairs with people grossly too young for them,’ another woman said, also believing it’s strange for grown men to use the app. 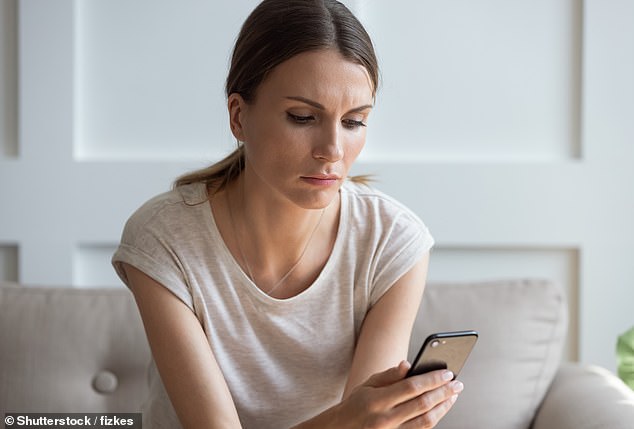 ‘Say something to your brother in law. I have two sisters – you need to look out for one another! If your sister hasn’t got your back, who the F does,’ one woman wrote (stock image)

‘Say something to your brother in law. I have two sisters – you need to look out for one another! If your sister hasn’t got your back, who the F does,’ one woman wrote.

‘Confront him and say “if u don’t tell her the truth, then I will,”‘ another suggested.

‘Ask the brother in law, he can confirm or not. Then the ball is in his court. If he lies, guilt could get to him and the truth could come out. It’s your sister, your blood and bones, do what you can if you can!’ one woman said.

Other user advised caution: ‘I would have to be 100 per cent sure before confronting anyone about this. But also go with your gut feeling because that is usually right!’

Some recommended not saying anything at all: ‘Personally I’d say nothing, saying something could start a huge issue just on the basis of a glimpse of something you thought you saw.’