Woman in throuple wants partner to get girlfriend pregnant too

A woman in a polyamorous throuple relationship who accidentally became pregnant now wants her boyfriend to have a baby with her girlfriend too.

Hayley and Devin decided to make their relationship more serious in 2015 and have been together ever since, but in 2018, Ciara got in touch and asked if they wanted to form a three-way relationship. 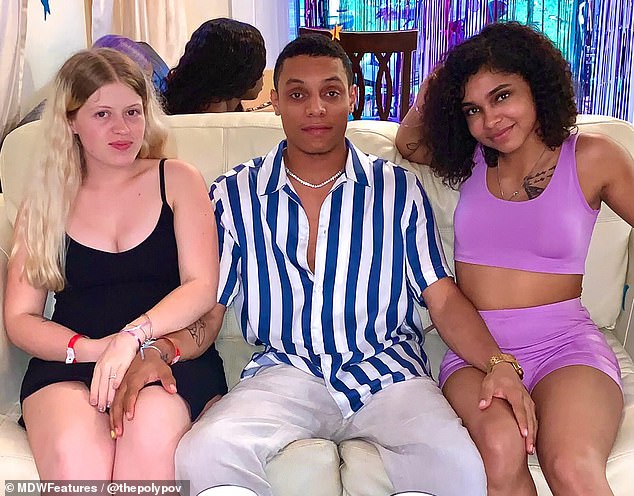 Trainee public accountant Hayley Hale, 22, (left) announced she was seven months pregnant and although it was unplanned, she now wants receptionist boyfriend Devin Hale, 24, (middle) to have a child with their girlfriend Ciara DeJesus (right) 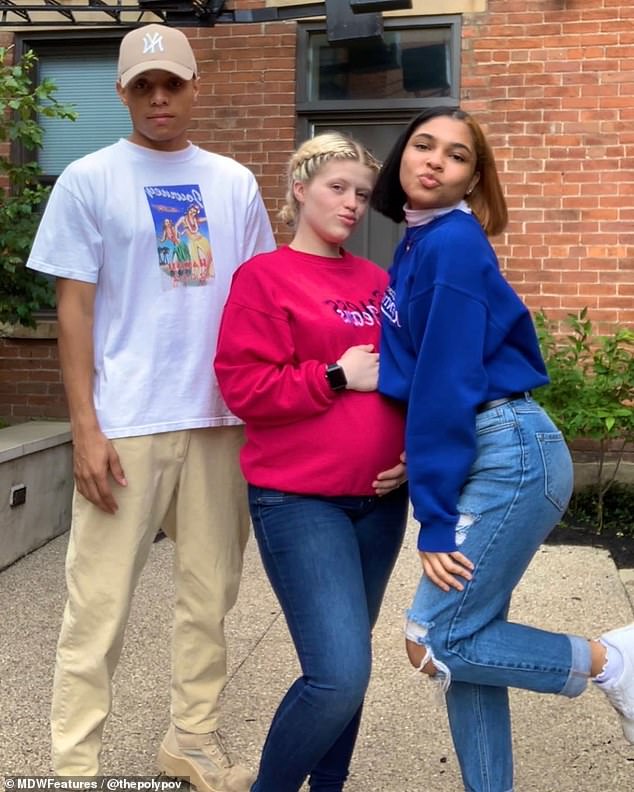 Hayley (left) and Devin (right) decided to make their relationship more serious in 2015 and have been together ever since, but in 2018, Ciara (middle) got in touch and asked if she wanted to form a three-way relationship

Although Hayley had reservations about the idea, Devin was excited and she decided to give it a go.

The initial 12 months were difficult, with both girls’ previous relationships with Devin making it hard for them to connect on the same level.

Hayley says that jealousy in a polyamorous relationship can turn small disagreements into massive flare ups, but by working on their individual relationships, the trio now get on well.

In 2019 Ciara moved in with Hayley and Devin and they now share a bed and all of their finances. 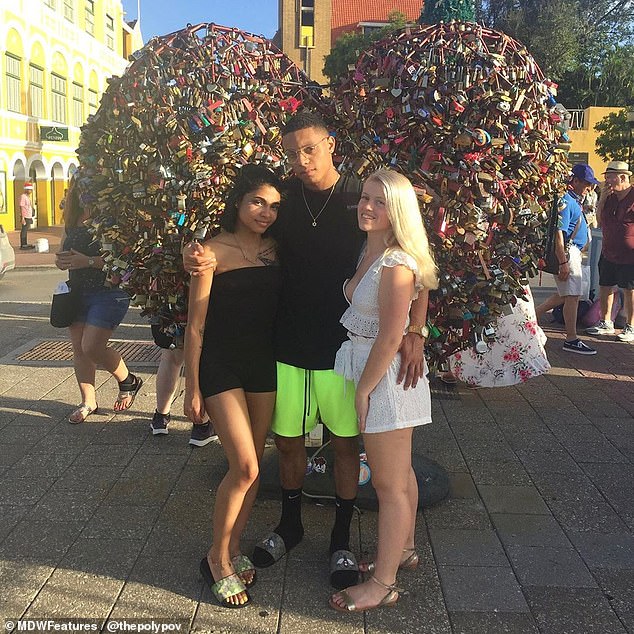 Although initially sceptical, Hayley had reservations about the idea, but with Devin excited by the idea, she decided to give it a go 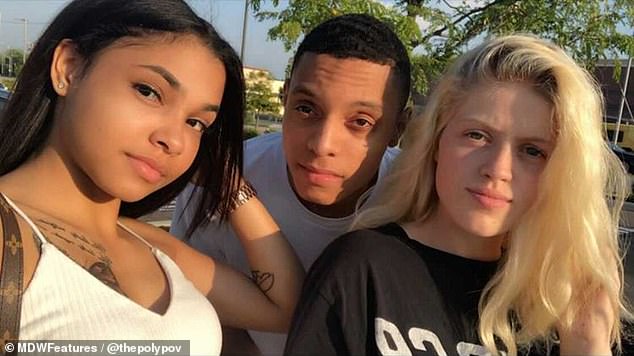 Hayley said that the first 12 months were the most difficult, with the smallest of problems blowing up massively 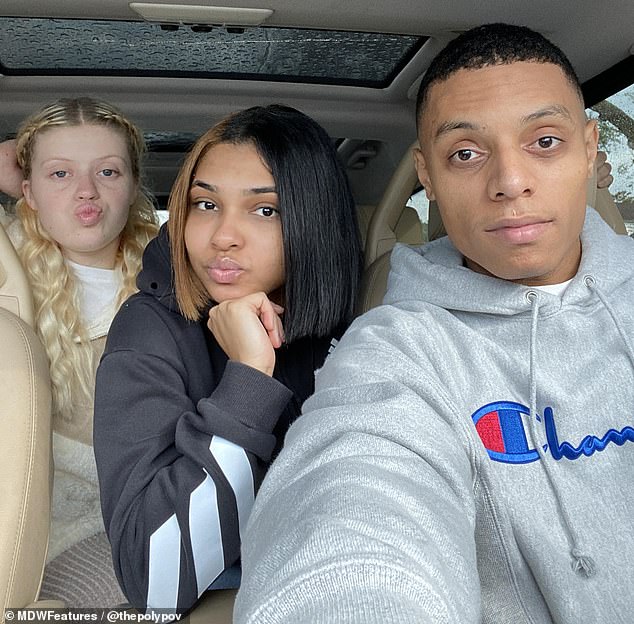 After Hayley and Ciara focused on developing their own relationship, the polyamorous relationship also blossomed

The trio’s decision to have a polyamorous relationship was difficult to understand for some of their parents, with Devin’s mother struggling with the idea.

Ciara’s mother, grandmother and sisters told her a more traditional relationship would be better.

Despite this, Hayley announced this month that she is seven months pregnant and although it hadn’t been planned, she now wants Devin to get Ciara pregnant too so that they can have children around the same age.

Hayley said: ‘Polyamory to us is just like a regular relationship but more complex because it involves three people. 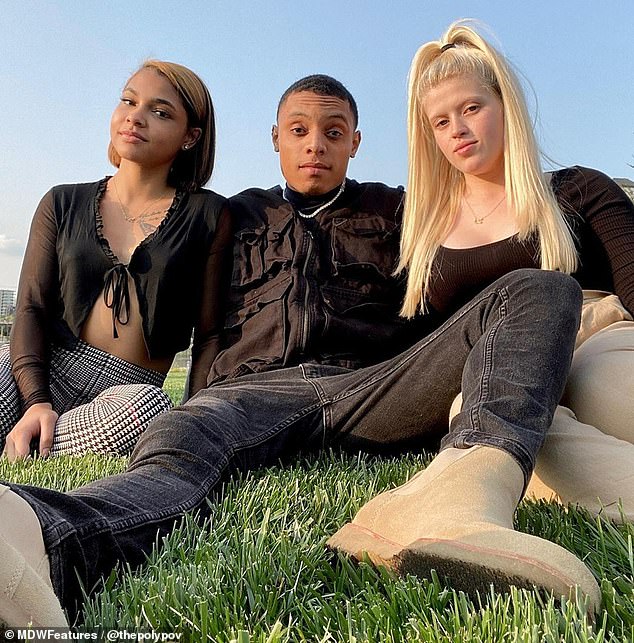 The trio already live together and share a bed and all of their finances and hope that with three incomes supporting their household, they will be able to have greater financial freedom 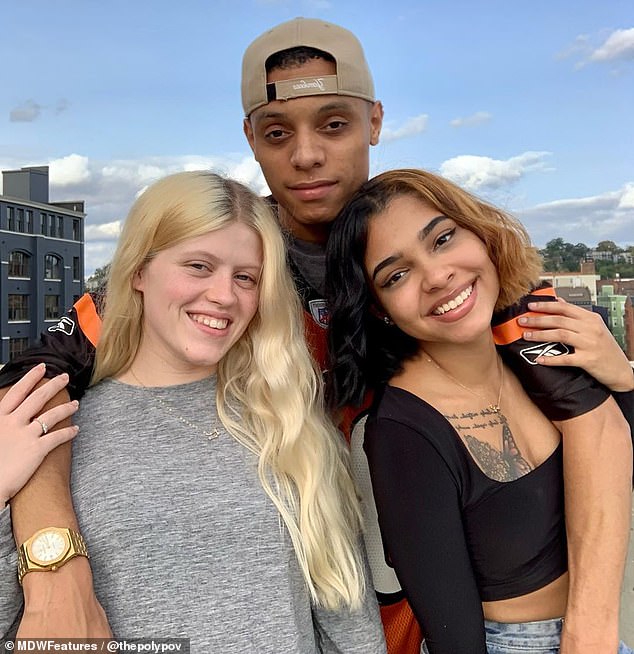 The trio plan to have a wedding ceremony, which will not be legally binding, to show to their families how committed they are to their polyamorous relationship

‘Being a triad means we get more out of life because we will be able to have an even bigger family with more love, support and financial freedom.’

She also said that after the first two children, the trio plan on waiting another two or three years before each then having another child.

Hayley also said that as a family they hope to have more financial freedom with three incomes supporting the household.

Explaining their pans for the future Hayley said: ‘We will all be the parents to all the kids, Ciara and I will both be mummy and Devin will be the dad of course.

‘We plan to have a wedding ceremony even though it won’t be legally documented but will hopefully help the rest of our family members understand just how serious we are.

‘Everyone is so different and so is everyone’s version of love.

‘Live the life you want, be happy, love is love’.