Why you should take a holiday from trying to please your children: Forget lavish day trips and expensive treats, they just want to slob around, says the bestselling author of Why Mummy Drinks

As August draws to a close and the return of school creeps so near you can almost taste that first, blissful, solitary cup of tea, I suspect many mothers will worry this has not been the family summer of which golden memories are made.

After such a rotten time, with months cooped up at home, our little darlings deserved the holiday of a lifetime.

And yet thanks to soggy staycations, foreign holiday chaos and a raft of UK attractions limited or closed, it’s felt almost impossible to treat them at times.

You wanted it to be, well, perfect, but if you fear they’ll drag themselves into class on that first day back feeling dejected and disappointed, you could not be more wrong. Let me explain why your cherubs will have had a brilliant time this summer — and why you’re the only one who feels let down. 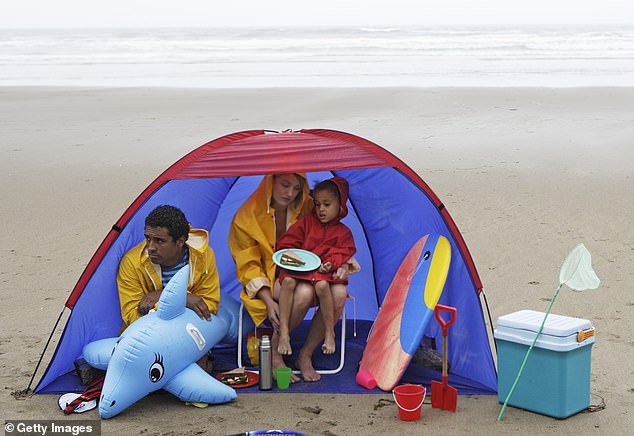 Once upon a time, I was determined to provide my precious moppets with an idyllic, sunkissed childhood, a glorious summer reminiscent of the joys of The Famous Five.

Under my plan, the summers would be one long endless round of japes and frolics — rosy-cheeked children tumbling merrily through sun-drenched meadows. Or splashing happily in sparkling streams, gingham-clad and delightful, as I, their doting mama, looked on fondly before dispensing gooseberries, homemade cake, and, of course, lashings of ginger beer.

I procured an adorable wicker picnic hamper from TK Maxx, ‘borrowed’ (ie. pinched) a very Instagrammable vintage coolbox from my mother-in-law, and paid a ridiculous sum for a little portable barbecue from John Lewis as clearly sausages on the beach would also feature in this fantasy summer, and I was doubtful of my fire-building skills.

(Wishing to be suitably, sustainably middle-class, a disposable barbecue would not have completed the look at all.)

I was, in short, all set. Living in Scotland, there was an abundance of glorious countryside, lochs and glens and mountains only a short drive away, ready for our summer adventures.

How splendid it all would be, and what Happy Memories my precious moppets would be furnished with!

Unfortunately, my son and daughter had not got the memo. 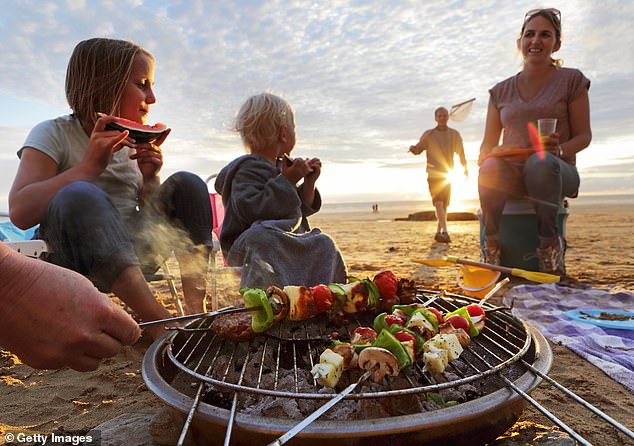 Gill said when her children were both under ten, they refused to wear gingham and preferred the local pool to lakes (file image)

The vintage coolbox, for a start, proved extremely heavy to carry, the wicker hamper was cumbersome, and the trouble with the portable barbecue was that once lit, it took for ever to cool down before you could put it back in the car.

Worst of all, though, my darling children, then both under ten, proved extremely resistant to every attempt to coerce them into the japes needed to create Happy Memories. They point-blank refused to wear gingham.

They did not wish to swim merrily in rivers and lakes, they wanted to go to the local pool and play on the sweaty inflatables.

Our visit to an island in a lake which boasted an ancient priory (and I was quite sure probably a den of thieves concealed somewhere if only we could find and thwart them) started with the children whining they just wanted to go to the park. It ended with a stern telling-off from the Historic Scotland lady as they scaled the walls, while I was distracted unpacking the lovingly made picnic for them.

They did splash in sparkling streams quite a lot, but usually while crying because they had fallen in at an inopportune moment and I was shouting at them to get out.

A particular low point was steri-stripping my son back together after he managed to fall over before we even left the car park.

And their favourite part of any visit to sites of historical significance was a trip to the gift shop. Here they would plead for overpriced sweets and plastic tat, as I attempted to suggest a nice book, or even, perhaps — the cheapest thing on sale — a pencil. 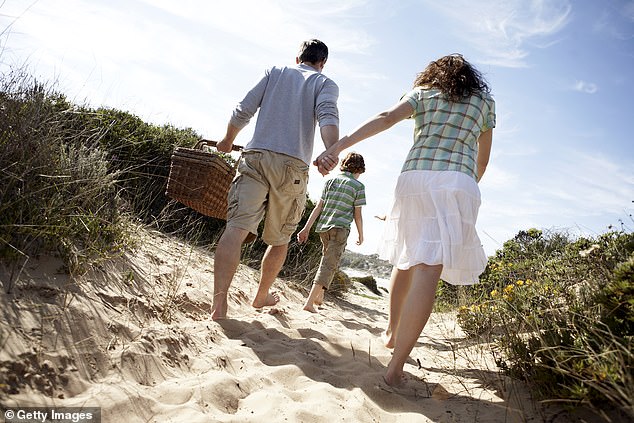 And then six years ago, the day before the holidays began, I was cleaning the bath when I slipped and broke several ribs.

The nice doctor gave me an array of strong painkillers and advocated rest, which I didn’t have much choice about, as doing pretty much anything hurt immensely, especially driving.

Racked with guilt, but with little other choice, I turned the children over to the electronic babysitter, while I lay on the sofa trying not to slip into a co-codamol coma.

I felt terrible about this. No outings, no picnics, no fun, no homemade cakes, no plots to foil, no Happy Memories being made at all.

Just before the children went back to school, I apologised profusely for the rubbish holiday they had just had. They looked at me in surprise. For, according to them, this had been by far and away the best school holidays ever! Unlimited Netflix and Minecraft. No improving days out, no castles, museums or country houses. No rivers to fall in, nor mud to wade through, and no picnic hampers to lug until a suitable spot was discovered.

While I had been tormenting myself with the eternal Mum-Guilt, they had been having an absolute ball. 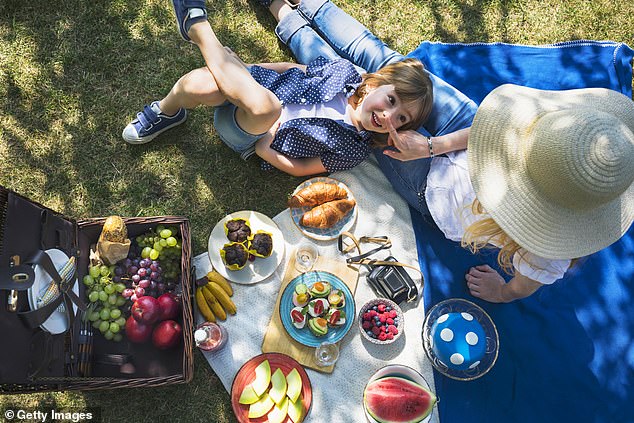 And I wondered why I had bothered putting myself through the stress of baking cakes the night before our outings, of packing the wellies, waterproofs, sun hats and sunscreen and midge repellent and warm fleeces — all needed for an outing in the UK —when they were perfectly happy at home with a Jammie Dodger?

At that point, I decided the best thing to do would be to lower my expectations.

My attempts to recreate a fantasy summer from the 1950s did nothing but raise my blood pressure and annoy my children.

The wicker picnic hamper has been gathering dust for several years now, and the portable barbecue is languishing, unloved, in a corner of the garage.

I did hang on to the cool box I had ‘borrowed’, as it was handy for keeping beer cold at parties, but it too has not been on an expedition in some time.

And since the bar was lowered, everyone has had much more fun.

Even the day I discovered I had nothing in the house for a picnic, and stopped on the way out to buy crisps and sausage rolls — far from being scarred for life, the children were delighted and asked if we could do that every time, please? (No, we could not, because Mummy has standards, darling.) 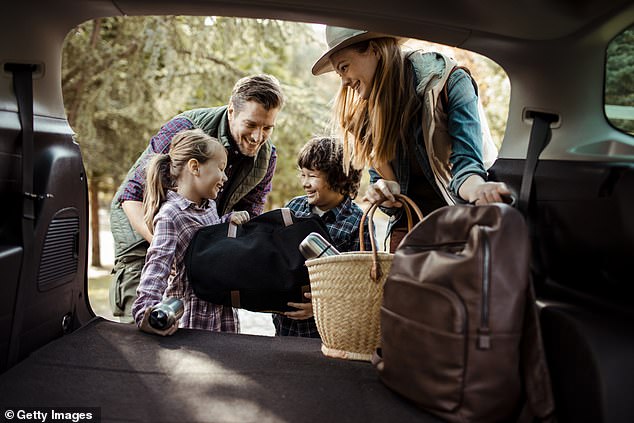 But I still cling to the hope that one day my little lovelies will turn around and wax lyrical about those magical picnics on the beach or by the river, and admit to the happy memories they made there. But they still firmly maintain that the Netflix holidays were the best ever.

So, if you’re feeling guilty that you haven’t been able to do as much as usual with your kids over the summer, or that a soggy local beach stood in for an epic adventure abroad, stop.

I’ve learned that kids are just as happy with a hosepipe in the garden as an aqua park, and it’s far more character-building for them to come up with their own entertainment, instead of planning every last detail for them.

In fact, it’s amazing how much actual parenting you can abandon without guilt if you rebrand it as being ‘character-building’.

Kids remember the daftest things too, so a 99 with a flake by a paddling pool has probably provided just as many happy memories as a week driving to France would have — and caused a lot less stress.

Why Mummy’s Sloshed by Gill Sims (£8.99, HarperCollins) is out in paperback now.

Kevin Clifton speaks out as fan left in shock over interaction: Thought this happened!