A Melbourne couple infected with COVID-19 while on a skiing holiday in the United States have been the subject of repeated police complaints after they allegedly flouted advice to self-isolate and visited shops and a golf course on the Mornington Peninsula instead.

A wealthy finance industry figure and his partner were two of about a dozen Australians believed to have contracted the coronavirus after attending a social function in the exclusive alpine resort of Aspen, Colorado, earlier this month. 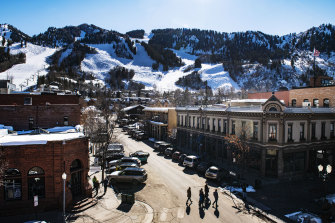 The sun shines down on Aspen, Colorado, earlier this month. A number of infections have been confirmed at the ski resort.Credit:The Aspen Times/AP

The Age has been told by multiple sources that at least two other Australians who attended the event refused to be tested in Aspen because they were reluctant to interrupt their ski trips.

The couple, whom The Age has decided not to name for legal reasons, returned to Melbourne on March 6 and four days later were informed by Victorian health authorities that they were at high risk of infection because of the outbreak in Aspen. Australian authorities had issued an order at the end of January for people to self-isolate for 14 days if they had been in contact with a coronavirus case, but mandatory self-isolation for all overseas travellers had not yet been enacted.

This couple were asymptomatic and did not self-isolate immediately on their return from the US. They only got tested on March 15 at Frankston Hospital, a source said. The woman was the first to test positive to COVID-19 and her partner tested positive two days later.

The two were advised to isolate from the public and are understood to have stayed at a property in Portsea. However, sources say they were soon spotted at shops in Sorrento and a nearby golf course.

A source close to the woman said the couple were the victims of a smear campaign by "bored housewives".

Three complaints were made to Victoria Police between March 17 and 19 but it is unknown if police took any action. The Age has spoken with the complainant, who also spoke on condition of anonymity, who said he had spoken twice with an officer at the Rosebud police station before he was referred to a special hotline that had been set up to monitor those placed into isolation.

Under Victoria's state of emergency declaration on March 16, it was mandatory for returning travellers to self-isolate.

A Victoria Police spokeswoman said she would not comment on "individual spot checks or reports of people breaching self-isolation".

Both members of the couple declined to speak on the record, and it's not suggested they were in fact responsible for transmitting COVID-19 to others. But their appearances in public have ignited a fierce backlash, particularly among parents of students who attend the same private schools as their children.

A source close to the woman said she had not breached any quarantine obligations and claimed the couple were the victims of a smear campaign by "bored housewives".

Under Victoria's Public Health and Wellbeing Act 2008, the state of emergency means the Chief Health Officer can appoint authorised officers – the police – to use public health risk and emergency powers.

These include the power to detain or restrict the movement of a person or group in the emergency area in order to eliminate or reduce a serious risk to public health. Anyone who fails to follow a public health order will face a $20,000 fine, though no one has yet been charged or fined as a result of quarantine inspections.

Those infected with the virus are also required to comply with the Biosecurity Act, which was invoked by the Morrison government on March 18 in a bid to stop, or at least slow the virus' spread. Under the legislation, those who repeatedly ignore control orders can face imprisonment of up to five years.

This week, Premier Daniel Andrews announced the government would ramp up enforcement action against those who failed to heed public health warnings. He said 500 officers would be deployed to a taskforce that would check on residents who were supposed to be self-isolating and inspect venues to ensure they complied with the official shutdown orders.

Mr Andrews issued a blunt warning to those who continue to flout government warnings saying, "If some Victorians continue to act in a selfish way, then people will die."