Home » Lifestyle » Want to see the Mona Lisa? Get in the queue Want to see the Mona Lisa? Get in the queue

The Mona Lisa gets around.

In 1516, she was lugged out of Italy on the back of a mule by Leonardo da Vinci and ended up in France, where she became royal property. She lived for a time at the Palace of Versailles, then moved permanently to the Louvre Museum.

That stay was interrupted in 1911, when a thief snatched her off the walls and kept her for two years in his Paris apartment before he was caught trying to sell her in Florence, Italy. 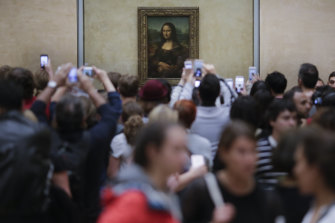 Now, the Mona Lisa is on the move again. And while it's only a temporary relocation — from one wing of the Louvre to another — it's causing commotion in Paris.

The Salle des États, where the painting has hung since 2005, is being renovated in time for the October opening of an exhibition commemorating the 500th anniversary of Leonardo's death. So, since July 17 the portrait has been installed in a protective case on a temporary wall in another gallery.

The difference is that there's only one way in — up three escalators and through a single doorway — and 30,000 visitors a day to accommodate. The museum has spread the word that it is "exceptionally busy," and that only prebooked tickets guarantee entry.

Once they get past the metal detectors, ticket holders are herded like sheep in a long, coiling line. They shuffle up escalators until they reach the Mona Lisa's skylit new digs: the Medici Gallery, named after a striking series of wall-to-wall paintings by Rubens also on display there.

The thing about the Mona Lisa is, supposedly, her eyes follow you. I could hardly see her eyes.

Not that anybody notices the Rubens works. As if in an airport check-in area, dozens of visitors rowdily wait their turn in another snaking line. Armed with smartphones, selfie sticks and cameras, they then rush into the final stretch — the Mona Lisa viewing pen. They have roughly 1 minute there before the guards shoo them away.

"I need more time to watch the Mona Lisa," said Jongchan Lee, a Korean mechanical engineer who had just seen the masterpiece for the first time. "There are so many people in there. So the guards are pushing us to go, go, go. That's not really good."

The distance between the public and the painting is another gripe: Visitors are held back about 4.5 metres from the 76cm painting. Jane Teitelbaum, a retired educator from the United States who had seen the Mona Lisa multiple times "in the flesh" and wanted to share the joy with her daughter and granddaughter, said she "wasn't pleased" with the experience, because "we were so far away". 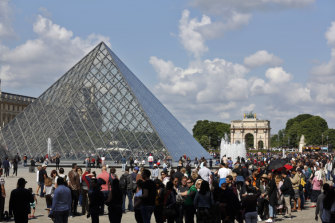 Tourists wait in line to visit the Louvre museum as it reopens in May.Credit:AP

"The thing about the Mona Lisa is, supposedly, her eyes follow you," Teitelbaum said. "I could hardly see her eyes."

Until the 20th century, there was little fanfare around the Mona Lisa: She was just another painting in the Louvre. Her theft in 1911, and a high-profile trip to the Met in New York and the National Gallery in Washington in 1962-63 made her a global media sensation.

Today, she tops the bucket list of many tourists.

The problem is that there are so many more tourists now. Worldwide, international tourist arrivals (visitors staying at least one night in a country) reached 1.4 billion in 2018, two years earlier than forecast, according to the UN World Tourism Organisation. France once again topped the list of destinations. And the Louvre drew a record 10.2 million visitors last year — more than any museum, ever.

Not surprisingly, the Mona Lisa is swarmed. Moments after seeing her, Alex Stewart, a professor at the University of Ottawa, said the crowds were "just enormous now" compared with 25 years ago when he first saw the portrait. "It's like cattle to the abattoir," he said.

His wife, Hsiao-Huei Chen, also a professor at the University of Ottawa, said the escalators made the Louvre feel like "a department store" where the items on offer were "too expensive for me to buy".

Back inside the Mona Lisa viewing pen, Gregory Jimenez, 25, a college student from Chile, lifted his fancy camera above the heads of a row of people in front of him and took a shot. "You have to take a photo to be able to appreciate her," he said as he walked out.

Photographs may be a solution, but they're also part of the problem. People don't just want to see the Mona Lisa: they want the picture for social media to prove it. Many don't look at her at all; they focus on their smartphone screens. Some even turn their backs, beam their finest Mona Lisa smile, and take a selfie, as she grins right back.

The phenomenon now known as overtourism is frustrating everybody: visitors, host institutions and host countries, said Marina Novelli, a professor of tourism at the University of Brighton in England. "This perception that I have the right to travel and go wherever I like, whenever I like, is no longer possible," she said. "We live in a world that is overcrowded, and travel is equally overcrowded."

Novelli said countries should stop striving for ever-higher tourism figures, and take a more qualitative approach to travel. Cultural institutions such as the Louvre should make visitors feel more responsible about the damage caused to museums and heritage sites by overcrowding, and try to change their behaviour, she added. It's like entering a lift, she explained: If there are too many people, "you're going to get stuck".

The Louvre is starting to introduce stiffer traffic-control measures. The museum's deputy managing director, Vincent Pomarède, has announced that from October or November, all visitors — even those eligible for free entry, or holding passes valid at all Paris museums — will need to reserve a timed slot for their visit. The measure was originally planned for early next year.

Novelli said she would be more radical still in protecting the world's top sites. If "the way to deal with it is closing access to a particular attraction," she said, "so be it."

Try telling that to Alia Al Jabr. The 19-year-old engineering student from Kuwait looked dazzled by her first encounter with the Mona Lisa. "We love art, we love seeing art!" she said, as her younger sister and brother nodded approvingly. But what about the rushed conditions? "I don't mind, because I took a beautiful picture. I actually took a video," she said, noting that she'd already posted on both Snapchat and Twitter.

What if she didn't get a photo? "I would be sad," she said. "It's like a memory. We have to take a picture to remember our first time here."

Is BTS Just an Overrated Boy Band or Is the Hype Justified?