ITV’s Flesh and Blood impressed viewers with its ‘gripping’ premiere that opened with someone in a body bag and established almost every character as a possible victim – and suspect.

The four-part drama, which airs on ITV every night until Thursday, centres on Vivien (Francesca Annis), who’s been a widow for just 18 months when she meets Mark (Stephen Rea) on a dating website for the bereaved.

She is a mother of three, all of whom are suspicious of Mark. There is son Jake (Russell Tovey), who is estranged from his wife; daughter Natalie (Lydia Leonard), who is having an affair with a married man; elder daughter Helen (Claudie Blakley), who has a professional rivalry, and her frustrated husband George (Keir Charles).

The show opened with police zipping up a body bag in front of her house, situated on a beach on England’s south coast. 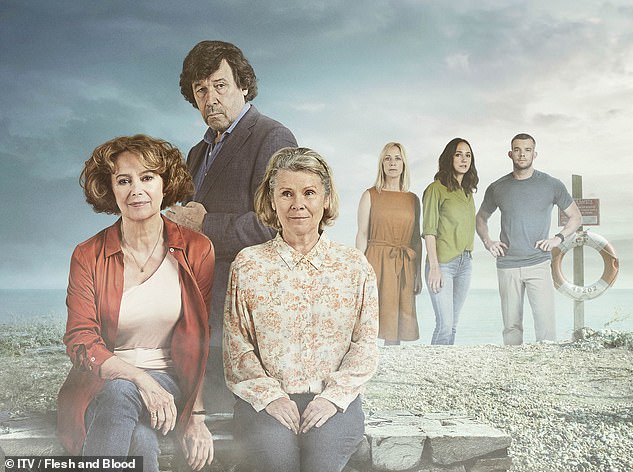 ITV’s Flesh and Blood impressed viewers with its ‘gripping’ premiere that opened with someone in a body bag and established almost every character as a possible victim – and suspect. Pictured l-r: Francesca Annis as Vivien, Imelda Staunton as neighbour Mary, Stephen Rea as Mark, Claudie Blakley as Helen, Lydia Leonard as Natalie and Russell Tovey as Jake 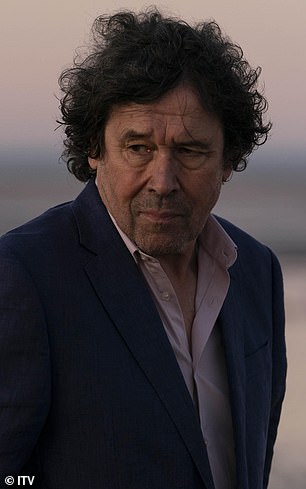 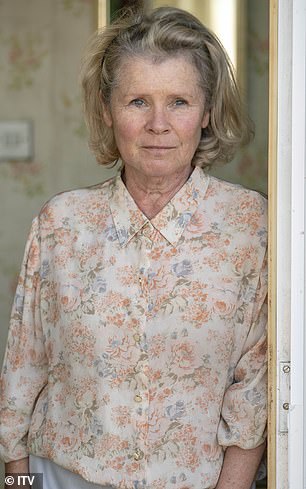 At the centre of the drama is Vivien (Francesca Annis), who’s been a widow for just 18 months when she meets Mark (Stephen Rea) on a dating website for the bereaved. Fans speculate he conspired with nosy neighbour Mary (Imelda Staunton), right, to murder Vivien 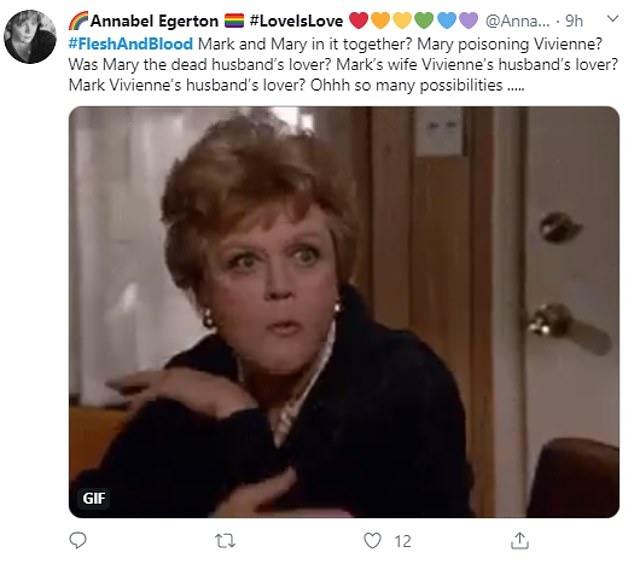 Viewers were quick to point the finger at Mary and Mark, speculating that they might work together to kill Vivien. Others said they hope Jake doesn’t turn out to be the dead body

The rest of the episode occurred as a flashback to before the apparent murder, inter-cut with a present day police interview with Vivien nosy neighbour Mary (Imelda Staunton), who confessed: ‘I can’t believe anything like this could happen on our doorstep.’

Fans were quick to point the finger at Mary and Mark, claiming they could have worked together to kill Vivien.

Mark’s presence prompts questions from Vivien’s children, who question his motives, and was seen going through Vivien’s drawers when she was not looking.

Viewers largely think he conspired with nosy neighbour Mary (Imelda Staunton), after the pair were caught exchanging a knowing look at the end of the episode.

Mary was also revealed to be a liar, after telling police she ‘kept to herself’ while elsewhere she was seen trying on Vivien’s clothes without her knowledge.

One viewer wrote: ‘Currently howling at Imelda Staunton’s character in Flesh and Blood. What a woman. And I’m putting my money on her being the culprit.’ 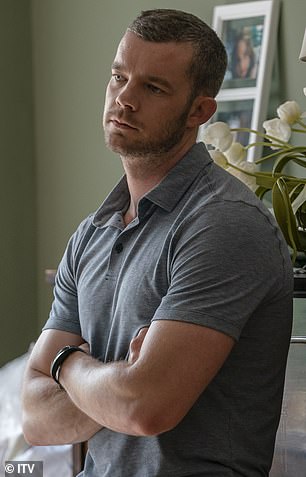 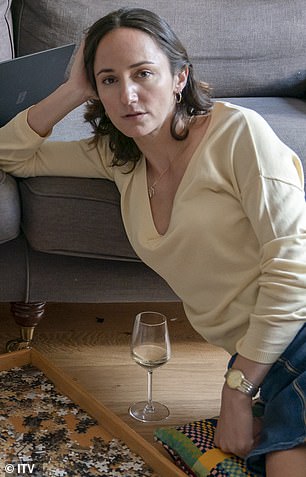 Left: Jake (Russell Tovey), a fitness instructor, is trying to repair his relationship with Leila, the mother of his children. Could he have done something rash in desperation? Right: Natalie (Lydia Leonard) whose affair with a married man was uncovered by his wife

Another added: ‘Well I think the neighbour and Mark are in cahoots. They are poisoning her with the plants she grows plus the neighbour was the dead husband’s lover!’

However Vivien’s children are also in the frame for the killing, with some guessing one of them could even be the victim. 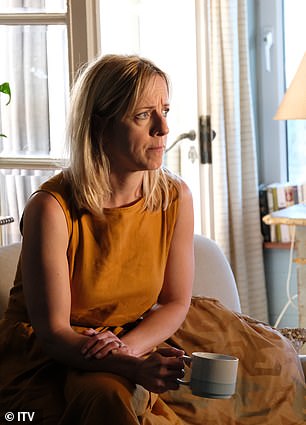 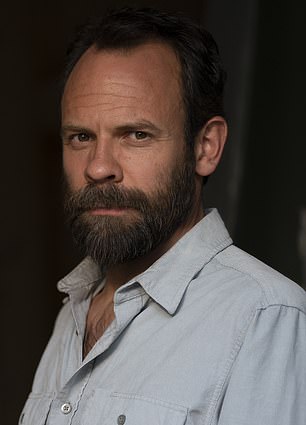 Helen (Claudie Blakley), a high-flying career-focused woman, had a professional rivalry with a woman who she had torpedoed out of a project. Right, her frustrated husband George 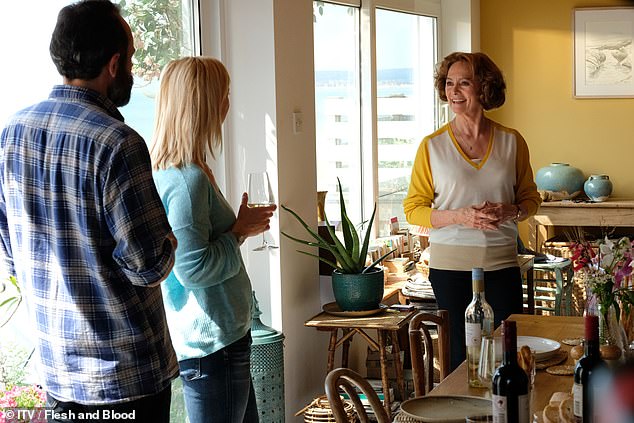 George and Helen visited Vivien in her beach house – the crime scene – during the episode (pictured). Fans still do not know the identity of the victim in the body bag

Viewers learned Helen, a high-flying career-focused woman, had a professional rivalry with a woman who she had torpedoed out of a project. Her stressful NHS job also involves sacking people, making her a potential target.

Helen is married to George, a stay-at-home father to their daughter Lily. Helen’s overarching commitment to work, and domineering manner at home, has led to an increasing distance in their relationship. George often retreats into getting stoned as a coping mechanism. Some speculated he might be involved in some way.

Jake, a father-of-two and fitness instructor, is trying to repair his relationship with Leila, the mother of his children, after she kicked him out over his spiralling gambling debts. Viewers questioned whether he might have killed his mother for money.

Meanwhile Natalie was seen entertaining a liaison with a married man, and it was revealed his wife had uncovered the infidelity. Perhaps this is at the root of the crime? 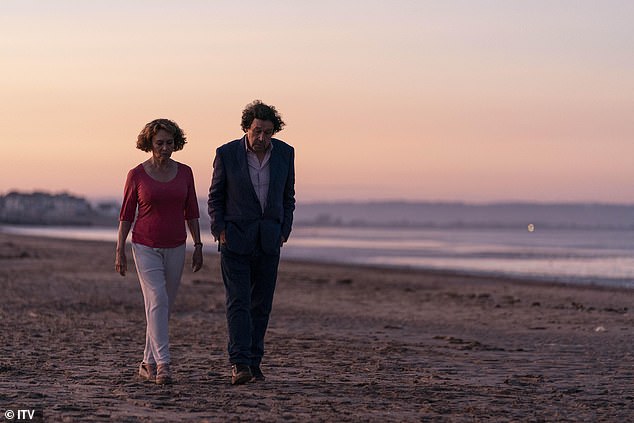 Viewers did not trust Mark (Stephen Rea) after he was caught searching through Vivien’s (Francesca Annis) drawers when she wasn’t looking. Pictured, walking along the beach

‘The Bachelor’: Who Was the First Bachelor and What Is He up to Now?