Because she’s worth it! University Challenge contestant distracts viewers with her constant hair-flicking – with one saying ‘It’s a quiz, not a L’Oreal advert!’

Rebecca Marrow, from the Peak District, who’s studying Natural Sciences at St John’s College, Cambridge, couldn’t resist playing with her brunette locks throughout her appearance on the academic quiz, particularly as the tension mounted toward’s the episode’s final minutes.

Marrow’s swishing of her long hair left some on social media saying she could ‘bag a hair commercial’, but others admitted they found it more than a little irritating. 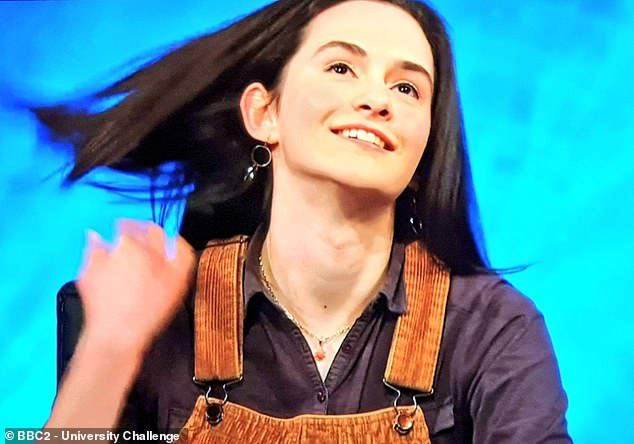 Rebecca Marrow, who’s studying Natural Sciences at St John’s College, Cambridge, flicked her hair away from her shoulders as the tension mounted in the latest episode of University Challenge, leaving some viewers distracted 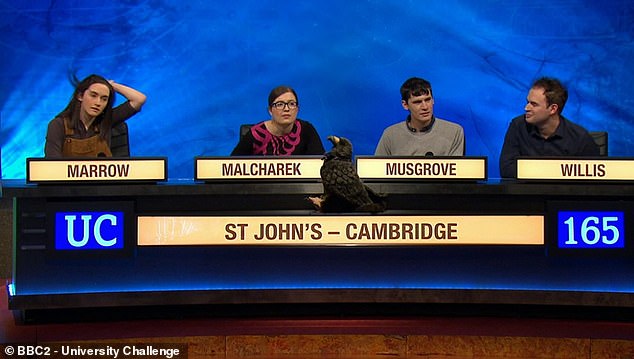 Competition-wise, it was a relative stroll in the park for Marrow and her team-mates, who conquered the Royal Academy of Music’s team by an impressive 220 to 40.

Much of the Twitter reaction to the latest episode of the show – another first-round match – though focused on Marrow’s hair-twiddling.

@RoxxieToxxic wrote: ‘Marrow flipping her hair like she’s in a perfume advert.’

@StuLoversidge penned: ‘Stop swishing your hair Marrow. This is #UniversityChallenge not a L’Oreal advert.’ 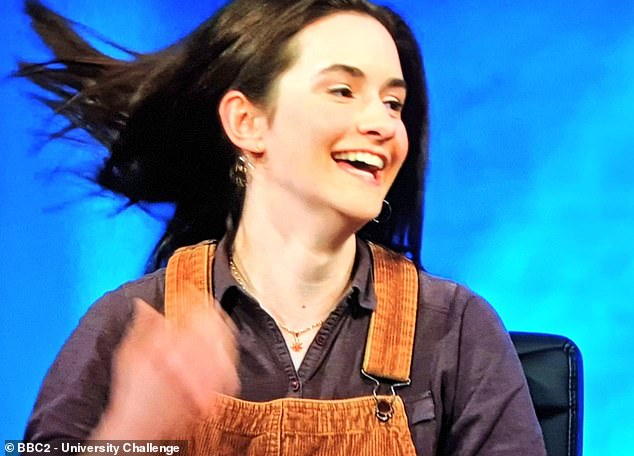 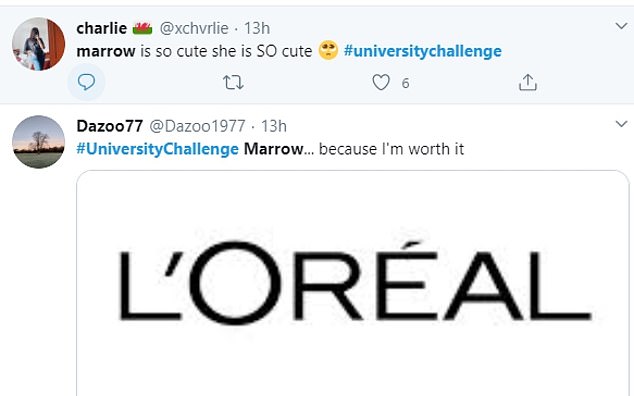 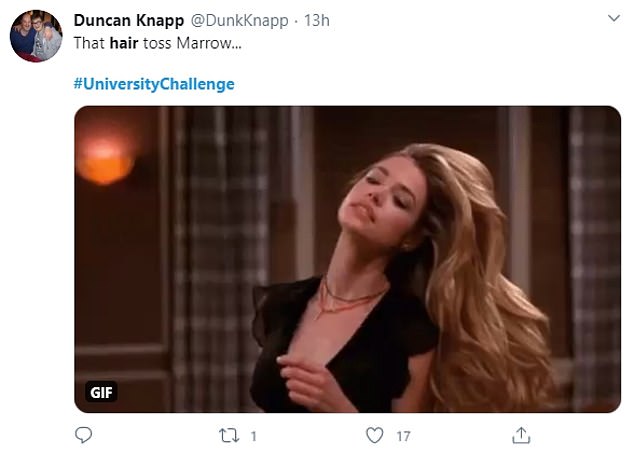 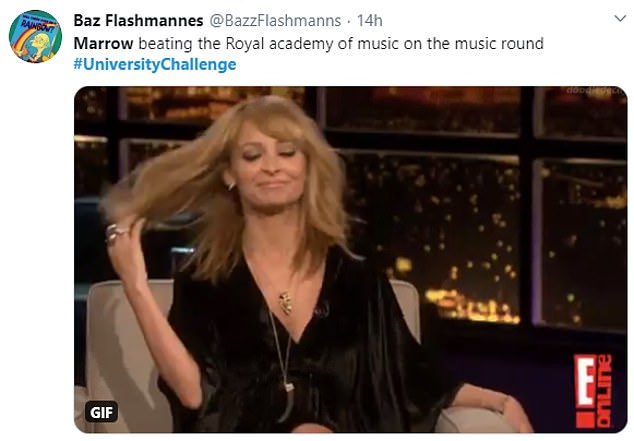 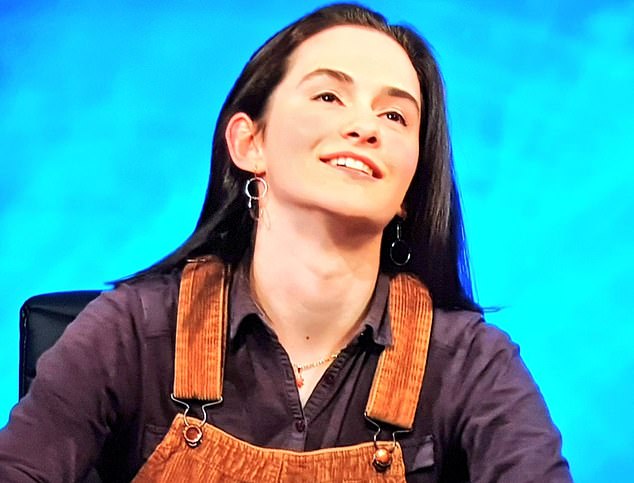 Some admitted they were smitten with Marrow’s intellect, with one viewer tweeting: ‘May I have your hand in marriage?’

Others though were smitten by Marrow’s impressive intellect.

Her finest moment came when she beat the Royal Academy of Music’s four brainboxes to correctly answer a question on…music.

@carolinerijkse asked: ‘Rebecca Marrow from St. John’s on #UniversityChallenge May I have your hand in marriage?’

Despite the show being in its earliest round, there’s already been an impressive roster of characters to rival fan favourite Monkman this series.

Seoan Webb, who’s studying Ancient and Modern History at Oxford’s Corpus Christi College, was tipped to be the stand-out star early on.

Last month, Webb’s ‘thousand-yard stare’ left viewers cold – and impressed – with his ‘merciless’ intellect as he gained most of his team’s points after they conquered Bristol University 175 to 135. 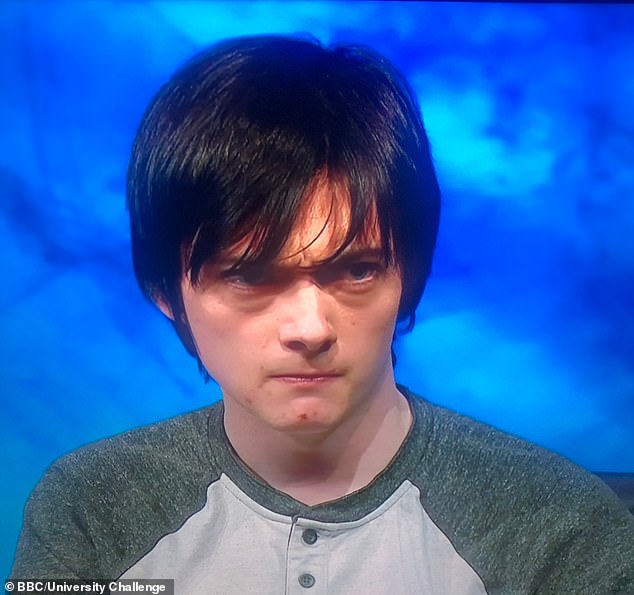 Don’t mess! Oxford student Seoan Webb blew the competition out of the water in the latest episode of University Challenge, which saw his team defeat Bristol 175 to 135

Taking to Twitter, fans of the show hailed the 19-year-old as the ‘stand-out’ superbrain of the series – despite it only being the second round of the student quiz.

After some commented on his awkward body language and deeply intense stare, one of his former teachers, from Elthorne High School in Ealing, West London, asked viewers to ‘be kind’, saying her former student was a ‘phenomenon’.

Webb gained 10 A* at GCSE at the state school comprehensive in 2017.

Despite his steely demeanour on the show, she added that he was ‘the loveliest kid’.

London teacher @NikkiCDaniel wrote: ‘Seoan Webb is a phenomenon. The brightest person both Mark and I have ever taught and the loveliest kid. He is the real deal. Please twitter, be nice. Good luck #CorpusChristi’

The school’s library also tweeted, saying they were ‘proud’ of their former student.

Ellen DeGeneres apology: What did she say on the show about the allegations?