Trevor Noah snuck in a political joke while opening the 2021 Grammy Awards with a hilarious and high energy monologue!

Despite the Grammy Awards being totally changed up due to the pandemic, Trevor Noah made sure the party still started off with a bang. The Daily Show host, 37, finally left his apartment, took off the hoodie he’s been wearing for a full year and cleaned up in a velvet tux to deliver a killer monologue. Trevor joked that the Grammys, which are being held partially outside, are now the “biggest outdoor event since the storming of the Capitol” on January 6.

He touched on the absurdity of holding a massive awards show during a pandemic, joking that the nominees needed to be careful because he wanted to get his deposit back on the tent — “they need it at a wedding in Malibu tomorrow.” He also slyly took a shot at the nominees by saying that this is the first time that the “white stuff” up their noses would be cotton swabs for COVID tests… ouch. 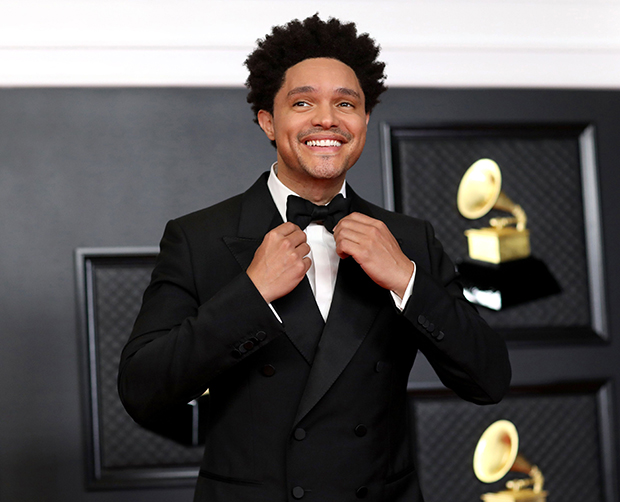 Though Trevor’s been living in his trusty hoodie while hosting The Daily Show from home, he turned things up a notch for his hosting gig. Prior to the show, Trevor walked the low-key red carpet looking dapper in a black tuxedo, featuring a velvet jacket, from Gucci. He topped it off with a sparkling brooch from Tiffany & Co.

Trevor was absolutely stoked to be hosting the show and filled his Twitter feed with excited posts in the days leading up to the event. The comedian posted a video of dogs frantically jumping into a pool, writing, “Headed into #GRAMMYs weekend like…” He also took part in a video for the awards show in which he named off his favorite Grammys performances of all time. Lizzo, and Run DMC’s iconic collaboration with Aerosmith at last year’s show take the cake. Who knew that Trevor’s a Swiftie and part of the Beyhive, too?

“I’m excited and I hope that this year there is a moment that everyone talks about and it doesn’t involve me falling down stairs,” he joked in the March 12 video. Just hours before the show, he also shared three hot tips for enjoying the Grammy Awards at home: use the bathroom before the show starts, tweet only during the breaks, and enjoy music that you’re not familiar with.