Save articles for later

Add articles to your saved list and come back to them any time.

Australian governments must rethink their "mega-projects" – those with a price tag topping $1 billion – as they search for an infrastructure-led coronavirus recovery, or risk delivering a "herd of white elephants", a new report warns. 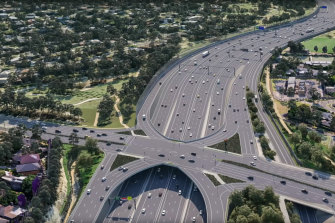 An artist’s impression of the widened Eastern Freeway, part of the North East Link project.Credit:Victorian Government

State governments nationwide are fast-tracking transport projects in the quest for an infrastructure-led recovery from the coronavirus downturn. But a number of Victorian transport experts argue spending billions on large-scale transport projects conceived before the pandemic makes little sense because the crisis has slowed population growth and fewer people will commute into cities as work from home becomes part of the "COVID-normal".

The Grattan Institute's report – The Rise of Mega-projects: Counting the Costs – has found that a decade ago there was one transport project in Australia worth more than $5 billion. Today there are nine and the total cost of them has already blown out by $24 billion.

Lead author Marion Terrill, the institute’s transport and cities program director, wrote that governments were "rushing to waste our money on what may turn out to be a herd of white elephants".

There was an electoral benefit to announcing mega-projects, the report said. Premier Daniel Andrews, for instance, announced the popular but expensive $50 billion Suburban Rail Loop project in the lead-up to the 2018 state election. But the report warned "projects may end up costing more or providing fewer benefits than anticipated".

"Taxpayers would get a bigger bang for their buck if politicians steered clear of what they like to call 'nation-building' and 'city-shaping' mega-projects, and instead spent more on upgrading existing infrastructure and on social infrastructure such as aged care and mental health care," Ms Terrill said.

Melbourne’s North East Link was costed at $6 billion when announced by then roads minister Tim Pallas in 2008. While it still follows the same route, its scope has dramatically expanded since then and it is now expected to cost $15.8 billion.

The West Gate Tunnel was meant to cost $5.5 billion and will now cost at least $6.7 billion. The $11 billion Metro Tunnel rail link is set to cost billions more, too.

A government spokeswoman said Victorians had voted for the North East Link at the 2018 election.

"We make no apologies for working alongside our engineers to deliver our election commitments that create jobs and deliver projects our growing state needs," she said.

Such cost blowouts are not unique to Victoria. Inland Rail from Melbourne to Brisbane was to cost $4.4 billion in 2010 and is now to cost almost $10 billion. Sydney’s Metro City & Southwest public transport project was meant to cost $11 billion and will now cost at least $15.5 billion.

The report recommends governments continuously disclose to Parliament material changes to expected costs and benefits, as listed companies are required to disclose to the stock exchange, and says governments should better learn lessons from past projects.

"Mega-projects should be a last, not a first resort," Ms Terrill said.

"They also point, correctly, to the need for smaller targeted, ready-to-move projects, that are more manageable, less likely to get into trouble and importantly deliver jobs right now," he said. "The pandemic requires a kick-start now, not grandiose schemes that will take years to deliver. Smaller, targeted, shovel-ready, job-creating projects are needed now."

The government declined to say how much the Metro Tunnel project had blown out by, with its spokeswoman saying discussions with contractors were continuing "as we get on with this vital project that will deliver more trains, more often".

It was confirmed last month that taxpayers would fork out extra cash to cover cost over-runs on the $11 billion Metro Tunnel project after a deal was struck with the project's contractors.

Get our Morning & Evening Edition newsletters

The most important news, analysis and insights delivered to your inbox at the start and end of each day. Sign up here.