Home » Lifestyle » This wild party is the best yet from Pinchgut This wild party is the best yet from Pinchgut

You enter through the seedy aftermath of a wedding, with bottles, streamers and pizza boxes littering the floor, while the orchestra, placed centre stage with the action scattered around, tune and parade their smart white couture. 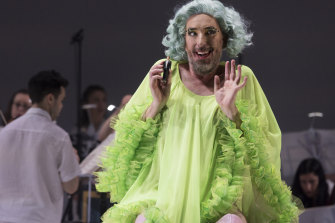 The central role could have been written for the talents of Kanen Breen.Credit:Brett Boardman

It is a fitting signal of the ensuing riotousness as well as of the central role the Orchestra of the Antipodes, under Erin Helyard, will play in spinning from Rameau’s finely wrought score, the Ariadne thread that guides us through this volatile parade of outlandishness. As the overhung sleepers wake, the Prologue portrays the birth of comedy, born and nourished in the metaphorical swamps of human and divine folly.

But the evening belongs to Kanen Breen as the swamp queen Platée, for whose vocal and burlesque talents the role could well have been written 276 years ago. Set up for a mock wedding with Jupiter (Peter Coleman-Wright) as a sting for the jealous Juno (Cheryl Barker), Breen’s Platée is a towering performance, not just for the high-heeled, thigh-length pink boots from which he dispenses this cavalcade of queenly kitsch, but for his indefatigable vocal and physical litheness, stamina and wit. Right at the end, just as one imagines la commedia e finita, Breen introduces a disturbing new tone, throwing body, soul and voice into a remarkable epilogue of scorned intensity. 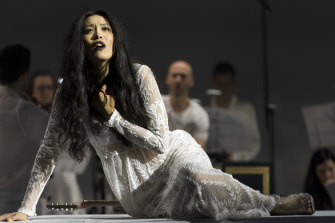 Going beyond Breen’s brilliance, this production overall is very fine. Singing the gods of love and of madness, Cathy-Di Zhang combined a fiery and focused stage persona with a beguilingly attractive, soft-edged voice, her wedding song on the fate of Daphne a tour-de-force of changing emotion. As Mercury, Nicholas Jones is as clean-cut a god as you could hope to meet, with smooth-shaven vocal lines as finely sculpted as his jawline and blooming richness as he opened out in the mid to upper range.

Chloe Lankshear has glowing roundedness to her sound and natural fullness of shape to the lines and Amy Moore provided warm blending support as Thalie. Leavening the farce with multi-facetted complexity, Rameau gives the chorus intricately crafted textures of grandeur and mock magnificence, which Cantilation delivered from front of stage with superb balance and thrilling resonance.

The score under Helyard changes quickly from storms to serenity, from parody to poignancy, its textures mutating from spontaneous sighs to richly woven polyphony. Theatrically, Armfield’s unflagging production is, for me, the best in Pinchgut’s 20-year history.