This parody Tinder account for handyman ‘Bill’ is too funny

‘I’m a single attractive man looking for a woman to cook me supper’: Man sets up brilliant parody Tinder account for 69-year-old handyman ‘Bill’ who ‘only has time for hanky panky’

A parody Tinder account for a very particular (and sex-focused) 69-year-old man named Bill has hundreds of Facebook users in stitches.

GoofyDads contributor Danny Spears, who is based in the US, set up the funny fake profile for Bill, a handy man who lives in the apparently fictional town of Mount Washing.

Bill is looking for a woman who will cook him supper — especially macaroni and cheese — enjoys hanky panky, and will listen to Hall and Oats — but ‘don’t be asking me to make you a baby.’ 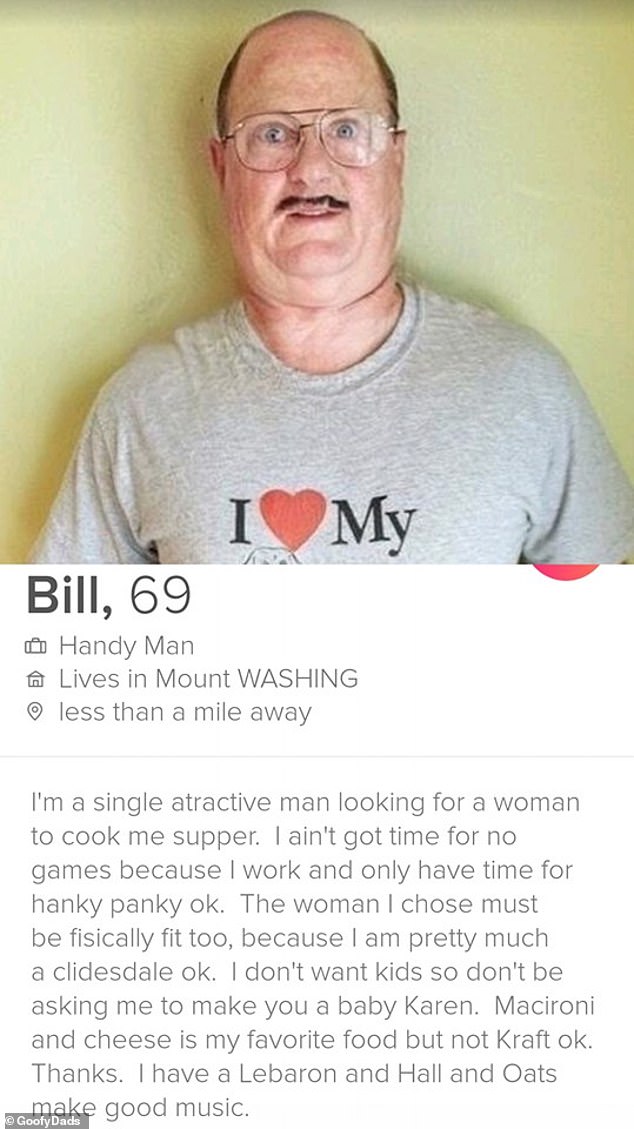 Parody: GoofyDads contributor Danny Spears set up a funny fake profile for Bill, a 69-year-old handyman who considers himself a ‘single attractive man’

The profile includes several photos of Bill. In his main picture, he looks like a deer in headlines, offering up a painful smile under a tiny mustache.

He also offered up an over-the-shoulder shot spotlighting his backside, plus a sexy leaning shot showing off his ‘I heart my wiener’ shirt.

But his bio is where the real comedy is.

‘I’m a single attractive man looking for a woman to cook me supper. I ain’t got time for no games because I work and only have time for hanky panky ok,’ it reads.

‘The woman I chose must be fisically fit too, because I am pretty much a clidesdale ok.

‘I don’t want kids so don’t be asking me to make you a baby karen. Macironi and cheese is my favorite food but not Kraft ok. Thanks.

‘I have a Labaron and Hall and Oats make good music. [sic]’

Spears, who made the parody account, also shared some parody messages ‘Billy’ exchanged with women.

When one woman sent him a message calling him ‘one sexy MF’er,’ he fired back, ‘Look Tracey, I’m not some sex object that you can just show off to your friends ok.’

‘If you can’t cook supper, don’t come at me trying to get me to sex you up. I’m a trashinal man ok,’ he said.

‘Do you like macironi and cheese? Also, do you agree that Steve Perry has the voice of an angil? Thanks,’ he went on, before adding, ‘Your profile says left leaning. Is one of your legs shorter then the other? That’s gross. I have to poop bye.’ 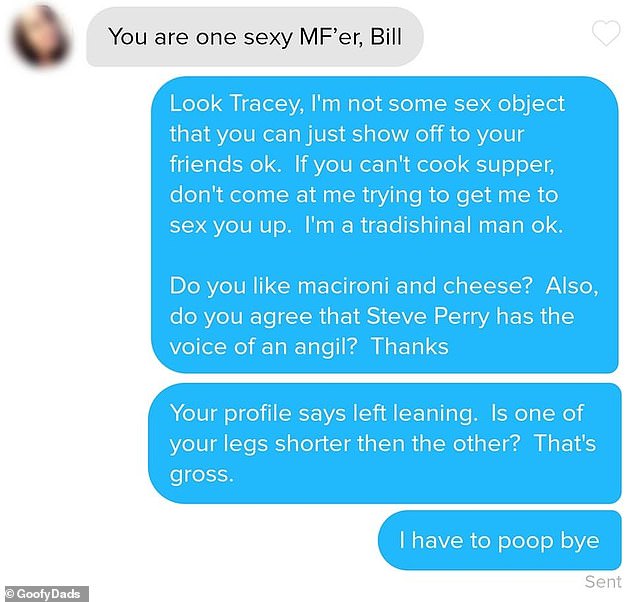 What a charmer: GoofyDads also posted some messages ‘Bill’ exchanged with women 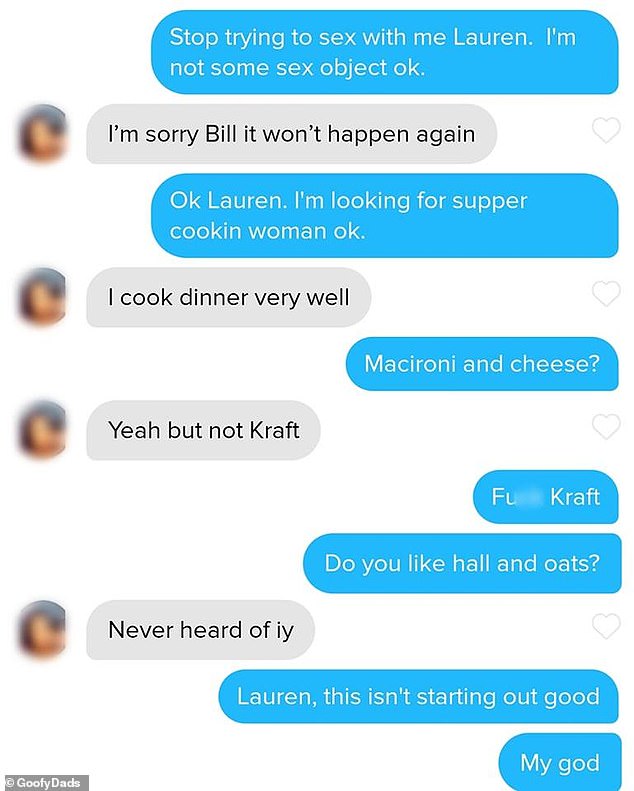 Taking off: The funny fake profile has delighted Facebook users

But the biggest joke of all is that Spears didn’t use stock photos or ask another man to pose for the funny pictures.

In fact, he told BoredPanda that all of the images are actually of him — with some editing from Face App to make him older.

‘We just wanted to provide some Dad antics for people to laugh at. Since I am completely inexperienced with Tinder, I figured it would be fun to troll some of the people on there,’ he said.

‘If it made one person laugh and that changed the course of their day, my purpose of doing it was met.’

‘Lmao too funny,’ wrote another.