Gone with the whisker! This Morning segment on ‘how to stroke your cat’ descends into chaos with all the wriggly moggies featured running away from their owners

Animals and live TV are not always a good mix, and a segment on today This Morning proved exactly why.

A segment on ‘How To Stroke Your Cat’, presented by journalist and cat lover Nick Harding, was intended to reveal the correct technique for petting felines to make them feel relaxed and increase bonds with their owner.

However, things rapidly segment rapidly dissolved into disarray, when cats appearing on the show via Skype with their owners refused to appear on screen, meowed and wriggled and then ran away.

Several of the owners were left desperately apologising, with one whose cat appeared to be sitting on her microphone, saying: ‘She’s being a bit of a pain, I’m really sorry, she’s being a massive pain.’ 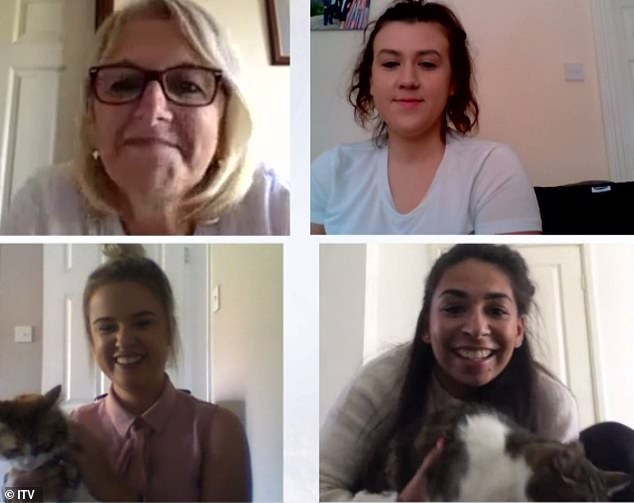 The ITV presenters video called several pet owners from around the country, but all four of them struggled to keep their animals under control in the segment 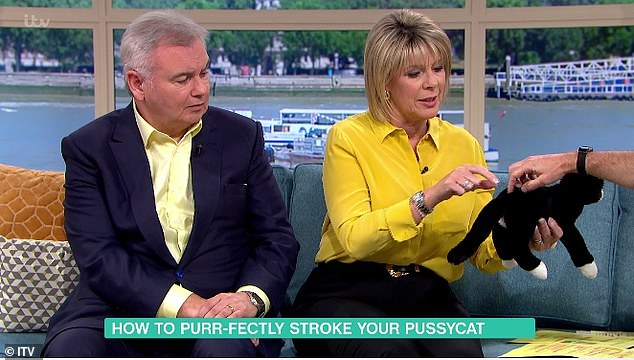 The presenters were joined by Nick Harding and his cat Barry in the studio, with Nick giving his advice on how to stroke a cat.

He said: ‘The stroke is very important Eamonn, as it gives the owner a chance to bond with their cat.

‘And what a lot of people don’t understand is that cats are pretty much wild animals so they still maintain their wild instincts.’

‘They’re not like dogs. people will make the mistake of big hand strokes on cats, and try to ruffle their fur – but that is just not what cats like.’ 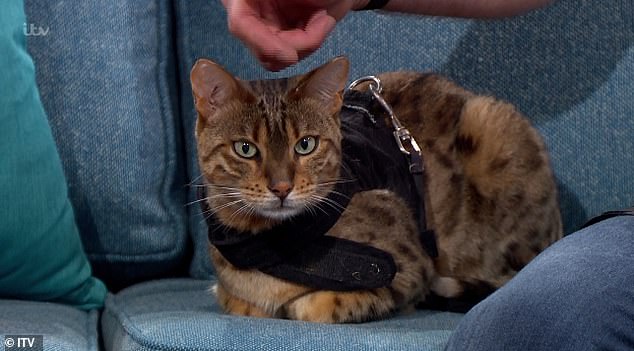 Barry, the cat, behaved well in the studio with Eamon and Ruth, until he became distracted by some pigeons outside 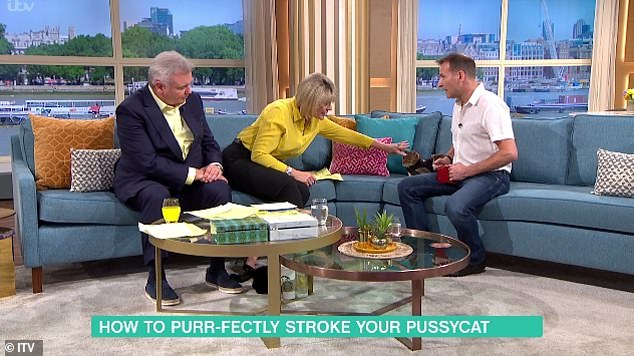 Ruth tentatively reached out to stroke Barry the cat during the segment, while owner Nick Harding explained how to ‘perfectly’ stroke a cat

He explained: ‘As you can see now, Barry is very relaxed.

‘It’s best at the top of the head, sometimes on the nose there and round the ears there, at the back of the ears, scratch on back of the neck.

‘Its where their facial glands are. They stroke their face against different areas, it’s pretty much what the cat is doing now – marking me out as his own.’

Things didn’t go smoothly in the studio either, and the presenters were forced to try the technique on a toy cat because Barry was distracted by pigeons outside the window. 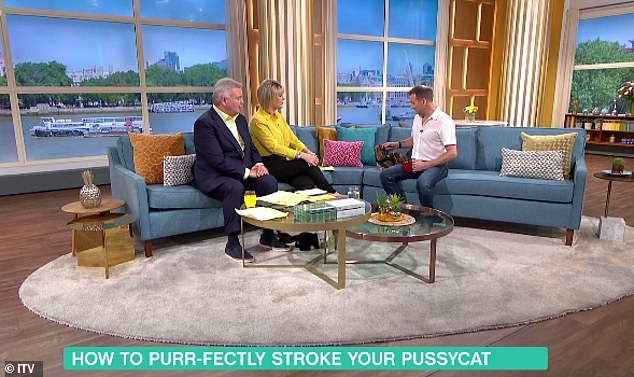 But it wasn’t long before Barry began misbehaving, and stared out the window, with the presenters forced to use a toy cat for their demonstrations

But things went really wrong when they made video calls to viewers across the country.

Lorraine, in Penrith, called into the studio with her cat Paw, who was noisily making himself known throughout the segment.

As Eamon and Ruth giggled at the cats loud meowing, she admitted: ‘He’s not very happy, he’s quite a big boy, he’s put a bit of weight on because he’s been on cage rest.’

Meanwhile Chloe, from Manchester, desperately tried to hold onto her pet Nala, who wouldn’t stay on her lap. 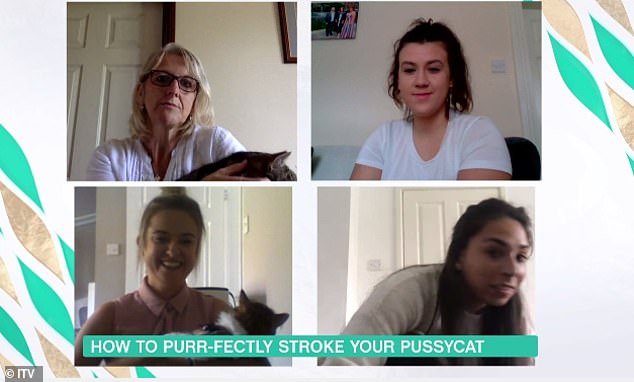 All four of the cat lovers on the programme had issues with their pets, with some refusing to stay still, others wriggling out of frame and one interrupting their owner by  meowing loudly

While Nala leapt off her knees, Chloe explained: ‘She’s usually affectionate but right now she wants to go outside.’

While her cat wondered off in the background, Chloe added: ‘To be honest she always wants to cuddle when she comes in and she’s quite loving and affectionate.’

It was no better when Eamonn and Ruth spoke to Beth, from West Yorkshire, who was desperately cuddling one of her cats. 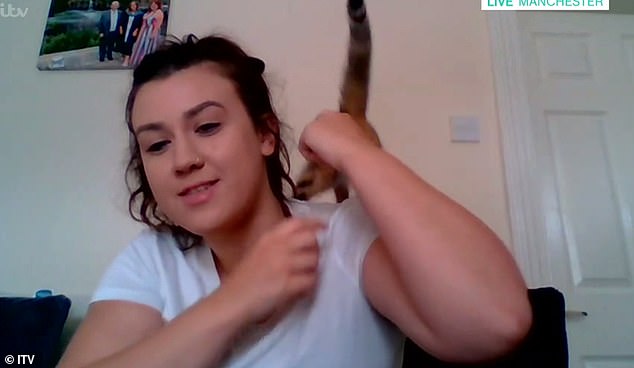 Chloe, from Manchester, said her cat Nala was normally ‘affectionate’ and loving, but ‘wanted to go outside’ during the live TV segment

She explained despite having two cats, the other animal wasn’t available as ‘they weren’t being very TV friendly right now.’

She said that the nine week old Primrose was ‘usually very friendly and approachable’, but collapsed into giggles as her cat wriggled out of her hands.

She apologized to the presenters, admitting the cat was ‘showing me up a bit’. 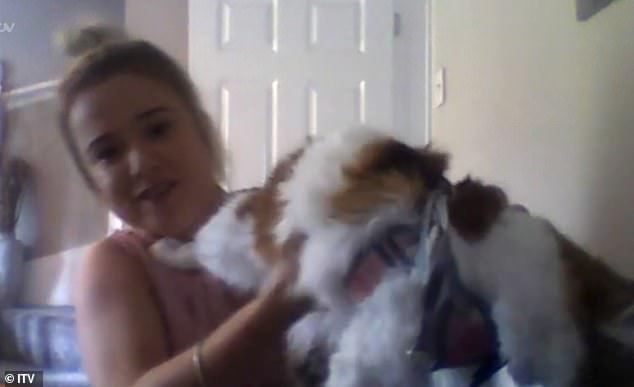 Finally, the presenters tried to speak to Sheress and her cat Buttons, from Leicester, but struggled to hear the young woman talk.

While Buttons slipped through Sheress’ fingers, Eamonn asked Ruth: ‘Can you hear Sheress because I can’t hear her? I think your cat may have been sitting on your microphone.’

And with Buttons out of the frame, Sheress apologized, saying: ‘She’s being a bit of a pain, I’m really sorry, she’s being a massive pain.’

Tristan Thompson: ‘When I met Khloe I was single… she does not deserve backlash’