Home » Lifestyle » The left is fighting back, even in Republican states, as it attempts to reshape capitalism The left is fighting back, even in Republican states, as it attempts to reshape capitalism

Behold the new political yobs. The British and American right, once keen to engage intellectually with the left and firmly anchored in business and the middle class, have now become yobs in their evidence-free, argument-free attitude to trade and foreigners. They are guided by noxious prejudice and the simple rule that their flag and interest must rule whatever.

Yobs too in their attitudes to all the decent impulses in society: tolerance; the rule of law (that’s for suckers); a welcome to immigrants, fair play; respect for truth, personal integrity. The triumph of the new nativism is the triumph of the yob. Our societies, let alone our politics, have never been so threatened.

Last week, the prince of yobs, Donald Trump, formally kicked off his campaign for re-election in Florida with a classic speech of the genre. There was no evidence, no popularising of grounded conservative arguments, no constructive case for how to build a better world of rewarding jobs and rich communities. It was a long-winded, incendiary, self-pitying rant against the purveyors of fake news, against the witch-hunt of the Mueller report, appropriating patriotism as only for him and his followers while triumphantly proclaiming that no president had ever been so successful. It was xenophobic and ignorant.

Meanwhile, leading US companies, hi-tech ones at the forefront, are becoming increasingly exercised at how the president’s attitudes and policies are menacing their businesses – with passionate submissions of protest to the White House. Apple made its submission public last week after Trump’s speech, vehemently denouncing higher import duties as profoundly damaging to the company.

The world is now a densely interconnected skein of factories and vast container ports in which production, whether of automobiles or washing machines, and especially hi-tech production, is organised across borders. The modern car or phone is so complex, with so many parts, that no one country, not even the US, can manufacture them all alone. Our prosperity, although it may be disastrously badly distributed, is built on our collective interdependence through free flows of goods.

It is true that the great merit of manufacturing jobs is that they can be located in otherwise left-behind districts outside the great cities that are home to proliferating new jobs in services and the knowledge industries. But it is not foreign manufacturers who take away jobs that can be brought back by tariffs and trade wars – the “blame” lies with ever cleverer robots replacing people, along with the reality that not every component of an iPhone, any more than a car, can be made in the US (or the UK for that matter).

Trump rages at foreigners because it is easier than telling his electorate the truth. His instinct, like his analogue in Britain, Boris Johnson, is to “fuck business” when it objects to what he is doing. The nihilist reaction marks the extent of their intellectual bankruptcy and the extent to which both are in hock to social forces that appeal to our worst demons rather than our better angels.

Extraordinarily, in the US, business is beginning to turn to the moderate left: capitalism has to be saved from capitalists and their political outriders. If the choice is between the wounding of their business by Trump or attending to the social woes that feed his electoral base, then the smart thing is to address the wrongs in US society.

Getting a growing hearing, even in Republican heartlands and among Fox News commentators, are Senators Elizabeth Warren and Bernie Sanders with their calls for a wealth tax, an industrial policy targeted at the regionally disadvantaged, a new charter compelling responsible business, universal healthcare, a higher minimum wage and mobilisation of education and training. 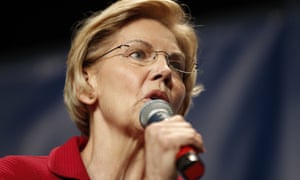 They have three great advantages. Their proposals are intellectually coherent, recognising a key role for the state compensating for capitalism’s dysfunctions. What they propose is feasible and addresses inequality. Crucially, they offer a vital narrative that the US’s problems are made at home and can be solved at home.

Johnson offers the British left the same opportunity. The coherence in what he says is only possible if you regard English nationalism as an argument. No key economic constituency believes in his no-deal Brexit, bonfire of regulations (which ones?) or prioritising tax cuts over healing public services crippled by austerity, from the criminal justice system to further education. In making war on Whitehall’s civil servants – “the swamp” – he attacks a vital constitutional and administrative bulwark.

He is the enemy within, buoyed not by argument but by a constitution with enfeebled checks and balances, a partisan press, an electoral base of English nationalists and an opposition leadership unable to grasp the initiative because it too is in thrall to English nationalism – that of the Corbynite Eurosceptic left. Johnson and his Conservative right behave with self-confident arrogance because, while their position may be weak, their opponents are even weaker.

Nor does this matter only to us. As David Miliband described in his Fulbright lecture, we live globally in what he calls the age of impunity. The weakening of the international order as the US and Britain turn inwards in the name of their national sovereignty has meant a new lack of accountability for those who would do bad anywhere in the world.

Trade may be slowing as protectionism rises, but that is the tip of a dark iceberg. Since 2011, there has been a six-fold increase in annual battle deaths as weapons become more lethal. Numbers of murdered aid workers, incidents of ethnic cleansing, use of chemical weapons , flows of refugees, the internationalisation of proxy wars are all rising exponentially.

This an era when President Putin and Saudi Arabia’s Crown Prince Mohammed bin Salman high-fived joyfully when they met at the G20 summit in Argentina last November. They can do what they will. As a medium-size power, Britain can’t change the world, but it is within our power to recognise the new demons at home – and oppose them to the last. It doesn’t have to be a world fit for yobs.

• Will Hutton is an Observer columnist