The drugs do work: Why GPs shouldn't stop prescribing antidepressants 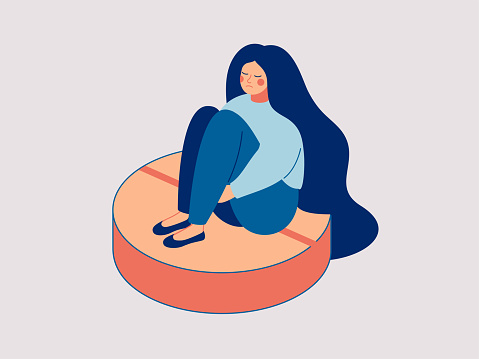 I remember the moment like it was yesterday: phoning my parents to tell them that I was unwell, and needed help.

I was a student in Glasgow, looking down into the River Kelvin wondering what it would be like to float, rather than feel like you were drowning in your own head.

That’s what depression feels like. It feels like you’re constantly fighting to stay afloat in your mind. Always on the edge of drowning, but never quite teetering over.

Truthfully, I’ve been on antidepressants twice in my lifetime (any other Sertraline Sisters in the house?) – once at 19 as a student, and again, just under 10 years later, married and aged 28.

It is clear to me the role they played in pulling me through my darker times.

So, when I heard that doctors are now being ordered to prescribe exercise, group therapy or mindfulness before handing out medication, I felt… Sad. Numb. Frustrated. Furious. All the words you should be saying to a therapist, not the internet.

While therapy is obviously be a key component of recovery from mental illness, it feels like the life-changing impact of antidepressants is being diminished – like they’re something to be avoided. In essence, it’s adding to the stigma surrounding these key medicines.

And importantly, we currently live in a country where the wait times for therapy on the NHS are incredibly long. Surely recommending therapy before antidepressants is just going to result in more people waiting for any form of help?

In my experience, I’ve found therapy and antidepressants used simultaneously to be the sweet spot. Exercise and mindfulness, while helpful for others, did absolutely nothing for me.

The news comes as apparently 7.3million Brits take antidepressants at this moment in time, which the National Institute for Health and Care Excellence (NICE) less than nicely claimed was an ‘overprescription’ of meds. I don’t know about you, but that’s a hell of a lot of runners I expect to be peppering the streets in coming weeks.

Believe me, I’ve tried everything to combat bouts of ill mental health. I, too, have sat in a room in silence for eight hours in the name of mindfulness.

It doesn’t work for me.

While there is a certain kind of ecstasy blasting dirty, early noughties German techno with a brand new haircut while pounding the pavements, I’ve found it to be temporary.

When I got home, while drowning in my own sweat, I was still the same person, with the same problems, just in Lycra and badly-fitting trainers.

I can see why NICE may be interested in changing the way the current system works. When I first visited the university nurse about my mental health, all I had to do was start crying before she printed out a bunch of Wikipedia pages on different antidepressants and asked which one I wanted.

It did feel like these drugs were the default.

I had been expecting therapy; to open up about how I was feeling and get to the root of what was ‘wrong’ with me. Instead, I was told the waiting list was ‘years long’ but I could drop into the university’s mental health clinic on either Tuesday or Thursday lunchtimes, as if those were the only days welcomed by depression.

After working up the courage to drop in, I filled in a form asking if I was suicidal – I wasn’t, but it was disclosed to me that I’d be seen in under six months (…six months!) if I was.

Within a year, I was lucky enough to secure a place on a research therapy trial, with an incredible therapist called Barbara. I was allocated six hours of therapy over the course of six weeks, which I can honestly say was the making of me. Though it wasn’t much in the grand scheme of things, she truly saved me, and I’ll be forever in her debt.

But for so many others in my position, the only support available would have been those drugs. Taking them away and replacing it with a waiting list for therapy doesn’t feel good enough.

Coupled with the right dose of meds, after much trial and error (meds can make you worse before you get better, which can be terrifying without the right support) I knew how to recognise my own triggers, and how to live with depression.

For the first time, I started floating instead of drowning. After my therapy ended, I met my now-husband and began to remember what it was like to be me. I safely and carefully weaned myself off medication after around 18 months (mainly thanks to no follow-up appointments about my mental state, but let’s not get started on that).

‘I don’t want to go back on meds,’ I remember sobbing to my husband. ‘Why?’ he replied. ‘They worked’

But, at the start of lockdown back in summer 2020, like thousands of others, I started to spiral. I had my first ever panic attack, and was diagnosed with social anxiety alongside my old friend: the blues.

‘I don’t want to go back on meds,’ I remember sobbing to my husband. ‘Why?’ he replied. ‘They worked.’

I couldn’t shake the feeling of shame I’d associated with medication that was unfairly attributed to me from society’s past generations of reserved, silent strangers. There was this idea instilled in me that medication was ‘an easy way out’ for people who were lazy, or for sad students.

This time, I was a working, married woman – but why did I feel so ashamed about something that worked?

This time, my GP was more understanding but the defeat in his eyes when he informed me that therapy was out of the question for ‘at least 18 months’, unless I went private, was tragic.

I couldn’t afford therapy, obviously, but thankfully, I had a fantastic network around me, with constant support from all angles who helped prop me up while I found my happy medium with meds alone.

Thanks to them, and to talking, I was able to safely wean myself off them again – but I’m not naïve enough to rule them out of my life completely.

If I had been told to exercise and wait until therapy became available, I don’t know what the outcome would have been.

You can run alone, and yes, it can make you extremely happy as it’s proven to positively impact serotonin levels in your brain. You can get your hair chopped off, and feel the best version of yourself – but if you’re alone when you get home, all you have is a head full of water.

Talking and taking meds truly can help, so I would urge anyone who has been prescribed exercise, or mindfulness, to think deeply about all of their options.

Waiting lists are long, and the NHS itself is drowning – like I once was.

I can absolutely understand why healthcare professionals are being advised to prescribe socialising, sweating and mindfulness – but they’re doing it with their hands tied behind their backs and their eyes firmly shut to the dangers of not correctly prescribing antidepressants.

I’m proof that the drugs do work – and the future of a generation without medication looks terrifying.