Home » Lifestyle » The best and the worst theatre 2022 wrapped up The best and the worst theatre 2022 wrapped up 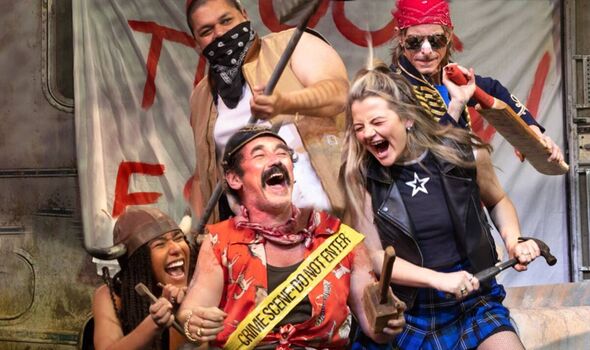 The best arrived as stages leapt back to life following the easing of Covid regulations. Theatres lit up like beacons of hope and relief, and actors, singers and musicians, released from bondage, went that extra mile to remind audiences what they had been missing.

For a while, it was a glorious rebirth. The worst came at the end of the year with a series of funding cuts which will have a severe impact on theatre’s ecology, particularly new writing.

The year kicked off with the sumptuous spectacle of Moulin Rouge!, the musical based on Baz Luhrmann’s outrageously entertaining film.

Later in the year, the US production of Oklahoma! at the Young Vic was a revelation.

This electrifying revival exposed the dark heart of the original and spilled it out on stage with new arrangements of the classic songs. My musical of the year.

Play revival of the year was Jez Butterworth’s mighty Jerusalem, with Mark Rylance returning to the role of Rooster, the wild and wanton forest dweller undone by his anarchic hippy lifestyle yet somehow glorious in his suburban paganism.

A rare sighting of Ionesco’s surreal comedy The Chairs at the Almeida featured the sublime husband-and-wife team Kathryn Hunter and Marcello Magni. It was their last appearance together as Magni died just six months later.

Comedy of the year was undoubtedly the National Theatre production of Richard Bean and Oliver Chris’s Jack Absolute Flies Again, a deliriously funny version of Sheridan’s The Rivals set in a country estate during the Second World War.

Three one-person plays proved that you don’t need a big cast to fire the imagination. Prima Facie starred Jodie Comer as the defence lawyer who changes her mind about rape victims when she is herself assaulted, and it proved beyond doubt that there was life for her after Killing Eve.

Dame Maureen Lipman has nothing to prove, of course, and her performance as an ageing Jewish woman reminiscing about her life in Martin Sherman’s Rose was funny, moving and wise.

Over at the Young Vic, Dutch actor Hans Kesting’s solo performance as a man attempting to reconcile with his dead dad in Who Killed My Father was nothing less than incendiary.

Bruce Norris’s Clybourne Park received a superb revival – at the Park Theatre, appropriately enough – and put the boot into US liberal hypocrisy in a way that was savagely funny, including the most outrageous joke heard on stage all year.

So was Eureka Day at the Old Vic with US actress Helen Hunt as a teacher trying desperately to run a post-hippy school whose “inclusivity” rules offend nobody, not even a “Transracial Adoptee”.

When it came to brand new plays, three stood out – Tom Wells’ Big Big Sky at Hampstead Theatre’s studio was an exquisite four-hander set in a seaside cafe on the Norfolk coast, while Joe White’s Blackout Songs was a scorching two-hander about young alcoholics.

Over at The Almeida, Peter Morgan’s Patriots was a timely examination of how Putin came to power through the financial and political support of oligarch Boris Berezovsky.

Finally, for sheer spectacle it would be hard to beat My Neighbour Totoro at the Barbican, bringing Japanese anime to life with the biggest and most endearing puppets ever seen on stage.

Valerie Bertinelli Shares Pics of Two Burglars, Reveals How She Scares Them Off