Team USA is keeping up with the Kardashians with an all-new loungewear collection.

Female athletes who will be participating in the U.S. Olympic and Paralympic Games in Tokyo this summer will sport loungewear designed by Kim Kardashian West’s intimate apparel brand SKIMS, according to a news release obtained by Fox News.

A full collection is going to be provided to the 626 female athletes who are going to compete in the summer games, which will include cooling loungewear and sleepwear sets.

“We’re so proud to be supporting female athletes during the Olympic and Paralympic Games in Tokyo. These women are incredible role models for younger girls, including my own daughters, showing them that anything is possible if you work hard enough,” said SKIMS’ co-founder Kardashian West, in a statement. “SKIMS is designed to empower women to feel their best every day and we’re excited to work with Team USA to help spread this message.”

The reality TV star turned fashion entrepreneur shared a longer statement to her Instagram that explained her fond connection to the Olympic Games through her stepfather Caitlyn Jenner (formerly Bruce), who earned a gold medal in track and field in 1976.

“Ever since I was 10 years old, I’ve heard every single detail about the Olympics from my stepdad,” she wrote on Monday. “As I would watch the athletes compete, I would grow to understand the dedication and honor being a part of the Olympics embodied.”

“SKIMS’ shared mission and values of empowerment and inclusivity made the brand the perfect fit for Team USA,” said USOPP Senior Vice President of Consumer Products Peter Zeytoonjian. “Our top priority is providing our athletes with the tools and support needed to compete at the highest level, and we’re excited to work with SKIMS to bring this unparalleled level of comfort to Team USA athletes and fans.” 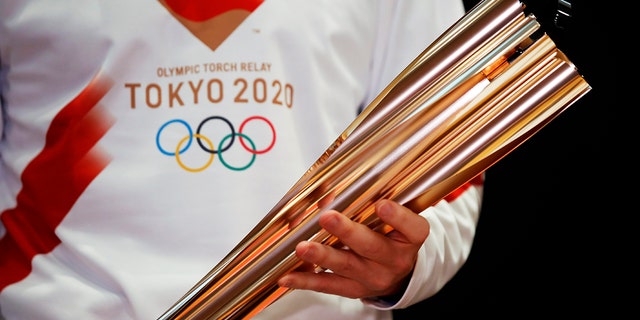 Fans who wish to get their hands on the limited-edition collection can expect to see the SKIMS-USOPP apparel listed on SKIMS.com starting on July 12 — nearly two weeks before the Tokyo Olympics will begin.

The 2020 Summer Olympics was originally supposed to start in July last year, but the coronavirus pandemic pushed the sporting event to 2021.