Home » Lifestyle » Sydney house values surge 30 per cent in a year, Canberra next most expensive Sydney house values surge 30 per cent in a year, Canberra next most expensive

Annual house value growth in Sydney has topped 30 per cent while Canberra has become the second most expensive capital in the country for a house as signs emerge the nation’s runaway property market may be starting to cool. 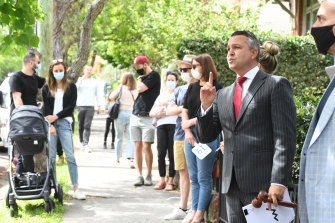 The median value of a Sydney house has climbed by more than 30 per cent over the past year, but there are signs the market may be about to cool.

In Sydney, house values increased by 1.6 per cent, with the median value now at a record $1.33 million. Over the past 12 months, Sydney’s median house value has climbed by 30.4 per cent.

But the median value of a house in Canberra climbed by 1.9 per cent last month to reach a record $985,000. Canberra’s median house value has now soared by 29 per cent since October 2020.

CoreLogic’s research director Tim Lawless said there had been a slight slowdown in overall dwelling value increases, as fundamentals such as income growth and supply started to catch up with the entire market.

“Housing prices continue to outpace wages by a ratio of about 12 to one. This is one of the reasons why first home buyers are becoming a progressively smaller component of housing demand,” he said.

“New listings have surged by 47 per cent since the recent low in September and housing focused stimulus such as HomeBuilder and stamp duty concessions have now expired.

“Combining these factors with the subtle tightening of credit assessments set for November 1, and
it’s highly likely the housing market will continue to gradually lose momentum.”

Property listings tracked by CoreLogic are starting to lift, with more than 47,000 properties put on the market over the four weeks to October 24. They are now 22.7 per cent up on the same period last year and 5.2 per cent over the 5-year average.

“More listings mean more choice for buyers and less urgency in their purchasing decisions. FOMO is likely to remain a feature of the market while listings remain so far below average,” Mr Lawless said.

Mr Lawless said the downside risks for the housing sector were increasing.

The Reserve Bank board meets tomorrow and is expected to announce its abandonment of one of its three key quantitative easing policies. The yield on 3-year Australian bonds soared last week to 0.6 per cent, despite the RBA’s stated policy of trying to keep them at 0.1 per cent.

Financial markets are expecting the bank board to not only drop this policy, but sharply upgrade its economic forecasts. That would mean it abandoning its stated position that interest rates will stay at record levels until 2024.

‘Paranormal Activity: Next of Kin’: The Terrifying Real Mythology Behind Demon Asmodeus