The high number of children beginning school without basic literacy and numeracy skills such as recognising letters and numbers is contributing to Australia’s poor results in international primary school maths tests.

An analysis of the results also found almost a quarter of year 8 students were taught maths by teachers who were not trained in the subject, compared with an international average of 10 per cent, while Australian students spent less time studying science than their overseas peers.

Almost 15,000 year 4 and year 8 Australian students sat the Trends in International Mathematics and Science Study (TIMSS) tests in 2019, which are held in 64 countries every four years.

Australian high school students achieved their best-ever results, finishing in the top 10 on the back of a significant improvement from NSW. But flat lining primary school maths results across all jurisdictions worried experts. Australia’s maths results are also falling in Programme for International Student Assessment (PISA), another international test.

An analysis of TIMSS results by the Australian Centre for Educational Research found about 47 per cent of Australia’s year 4 students attend schools where a significant proportion of students (at least a quarter) began without key foundational skills, such as recognising numbers above 10 and reading and writing some words. This compares with 80 per cent internationally.

Sue Thomson, who led the analysis, said the gaps are evident when children began school and grew as they got older. “We need to focus on getting all kids through solid pre-school and having all kids do that, not just some kids and kids in advantaged areas,” she said. 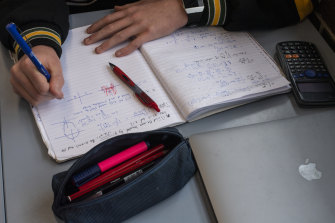 One in four Australian year 4 students does not like maths, compared with one in five internationally, the analysis found.Credit:Louise Kennerley

“We don’t want equity to be an issue at kindergarten level, so if we don’t want to start there it’s important that we do something about bridging that gap. Universal, high-quality early childhood education would be ideal.”

Elizabeth Death, the chief executive of the Early Learning and Care Council of Australia, said vulnerable and disadvantaged children needed at least 35 hours of early learning a week, but said the answer was not including academic learning in their day.

“The removal of the activity test, which is a barrier to children ‘catching up’ to their peers before school starts, will provide more improved outcomes than prescribing short bursts of push-down school based direction,” she said. More professional development for teachers and educators, to make learning appropriate and accessible for every child, would pay greater dividends for educators and children, she said.

The analysis found almost a quarter of year 8 students were taught maths by teachers who were not trained in it, compared with 10 per cent internationally, while 16 per cent of year four students had teachers with a major in both maths and primary education, compared with 32 per cent worldwide.

The analysis also found one in four Australian year 4 students did not like maths, compared with one in five internationally. By year eight, that had climbed to one in two, compared to 41 per cent internationally.

Australian students were also more likely to dislike science than those in other countries in both years 4 and 8.

Australia’s students were less likely to have a qualified science teacher in year 4 than their overseas peers, and more likely to in year 8.

“The stuff we teach in year 7 is all based on the premise they will have learned a certain amount by the time they’ve got there. We know that a high proportion of primary teachers don’t like teaching maths, they’re not confident in teaching maths, and they don’t necessarily teach it well.”

Our Morning Edition newsletter is a curated guide to the most important and interesting stories, analysis and insights. Get it delivered to your inbox.

Most Viewed in National

Flashback: Bob Dylan Sings 'I Threw It All Away' for Johnny Cash
Recent Posts