Earlier this week, the Duchess of Cambridge and Sophie, Countess of Wessex were reunited at the 2022 Commonwealth Games in Birmingham. As two working members of the Royal Family, Sophie and Kate are known to be very close and the pair gravitate towards each other at royal engagements.

According to body language expert Judi James, Sophie showed her “open-armed affection” for the Cambridges at the sporting event this week.

“After Diana’s death and Fergie’s banishment from the Firm, Sophie is left as the only royal wife of that generation and her body language here provides some clues that she and Edward might go out of their way to try to breach that emotional gap in the family when it comes to support and open-armed affection for William and Kate and their children,” she told the Mirror.

“Her greeting here seems to define her as the best auntie, going out of her way to hug and welcome her nephew and his wife as they take their seats to watch the sport.

“As Kate leans in Sophie throws both arms around her torso, clutching Kate’s right arm in her left hand to ensure the hug lasts and patting Kate’s back in an add-on ritual or extra bonding and reassurance as the two women cheek-kiss.”

Express.co.uk has collated all the best pictures of the future Queen Consort and her auntie-in-law over the years.

Express.co.uk has collated all the best pictures of the future Queen Consort and her auntie-in-law over the years.

Sophie and Kate at the Commonwealth Games, 2022

Sophie looked delighted to see the Duchess when the Cambridges arrived at the Sandwell Aquatics Centre earlier this week for the swimming event. 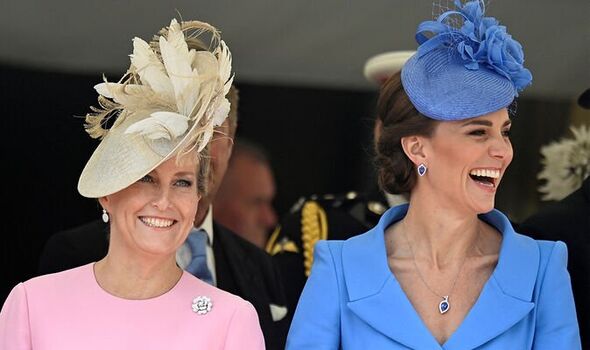 Kate and Sophie at the Order of the Garter Service, 2022

As neither Sophie nor Kate are currently members of the Order of the Garter, the pair stood together and shared a giggle as the ceremony unfolded at St George’s Chapel, Windsor in June.

Sophie supports Kate at her concert, 2021

Kate held a special Christmas concert at Westminster Abbey in December 2021, and sat to her left was Sophie for moral support.

Kate and Sophie chat at a palace reception, 2020

Both dressed in shades of red, Sophie and Kate were deep in conversation at a Buckingham Palace reception weeks before the first UK Covid lockdown.

Sophie and Kate chose to stand next to each other while attending the wedding of Princess Eugenie and Jack Brooksbank in Windsor a few years ago. 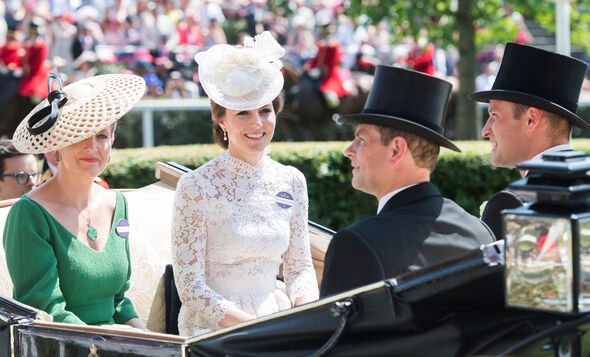 The Cambridges and Wessexes attend Ascot, 2017

Every year the royals descend on Royal Ascot, but in 2017, Kate and William were joined in a carriage by William’s aunt and uncle, and all looked very comfortable in each other’s company. 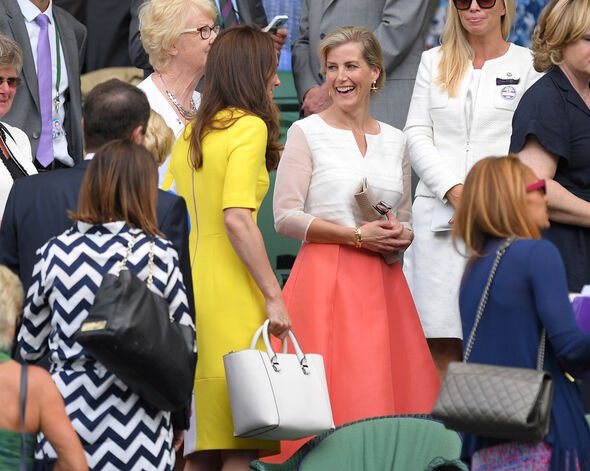 Kate and Sophie at Wimbledon, 2016

Kate and Sophie were pictured giggling as they attended their favourite event together in 2016, the Wimbledon Championships.

Sophie and Kate at the Remembrance Sunday service, 2013

When Kate was still relatively the royal newcomer, she was pictured beaming at Sophie on the balcony at the Cenotaph service in Whitehall in 2013.

Sophie and Kate at the Olympics, 2012

Just over a year after Kate married Prince William, the Duchess seemed to get on very well with the Countess. The pair appeared together with Princess Anne’s husband Vice Admiral Sir Tim Laurence at the London 2012 Olympic cycling event.