‘Sometimes you just don’t want to talk’: Pocock arrives in the Senate

There was scarcely a spare seat in the Senate’s public gallery last week as rugby union legend David Pocock rose to make his first speech to the chamber last week.

Watching from the Senate floor was an unusual visitor. 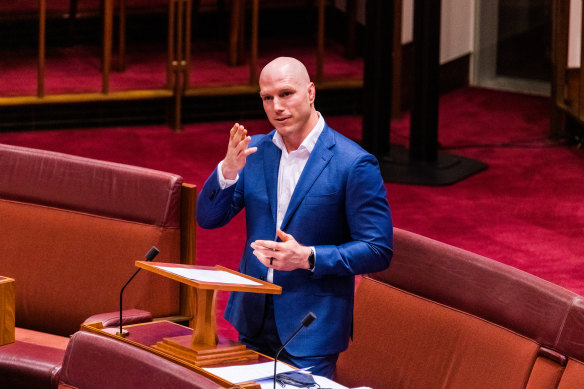 Prime Minister Anthony Albanese sat alone at the chamber’s edge to listen as Pocock eschewed the “kingmaker” title bestowed upon him by some commentators and laid out his ambition for the 47th Parliament as ACT’s first ever independent senator.

“It’s certainly not a mantle I seek; instead, I’d prefer to try and be a peace broker,” he told the chamber.

“I want to be part of making sure we don’t just end the climate wars, but we win them … and we start to lead as a country on climate action and biodiversity conservation.”

In a message that would have been noted by the Prime Minister, Pocock added: “I’m not here to stand in the way.”

It’s an approach that puts Pocock in the frame for negotiations on the major policy debates in this term of government, where Labor will need the support of 12 Greens and one additional crossbencher to pass its agenda through the Senate should the Coalition oppose it.

Pocock mightn’t like the kingmaker terminology but, against all odds, the federal election minted the former Wallabies captain and climate change warrior as a cornerstone in the Senate’s balance of power.

Almost as soon as his victory became apparent, Pocock began to shape the debate on climate. He was the first of the crossbenchers to indicate he would support the Albanese government’s 43 per cent emissions reduction target, saying while he wanted a more ambitious goal, the “community wants to see us banking some gains”.

His pragmatism squeezed the Greens, who risked being seen as obstructionist if they too didn’t back it in. As the first two weeks of the new Parliament drew to a close on Thursday, the Albanese government had chalked up a major victory – its landmark bill to legislate the target passed the lower house, with the Greens agreeing to vote for it after securing drafting changes to ensure the 43 per cent target was a floor and not a ceiling. 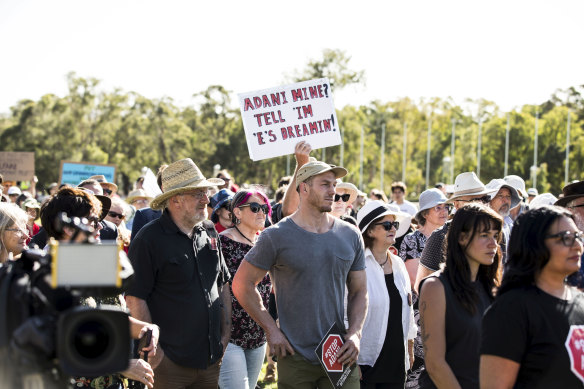 David Pocock at a Stop Adani Coal Mine protest on the lawns at Parliament House in 2019.Credit:Dominic Lorrimer

Pocock is now preparing to test his influence when the bill hits the Senate in September. He has teamed up with Tasmanian crossbenchers Jacqui Lambie and Tammy Tyrrell in drafting an amendment that will require the federal government to show how its policies align with Australia hitting the target.

The move is a postscript to his first speech; he won’t stand in the way, but neither will he be a rubber stamp.

Pocock is, of course, no stranger to the national spotlight. His sporting prowess and social activism have been traversed in countless newspaper profiles, features and TV interviews over the years. He was famously arrested in 2014 for chaining himself to a tractor in protest against a new coal mine in northern NSW, and together with now-wife Emma made headlines when in 2010 they boycotted signing their marriage certificates until same-sex marriage was legalised. 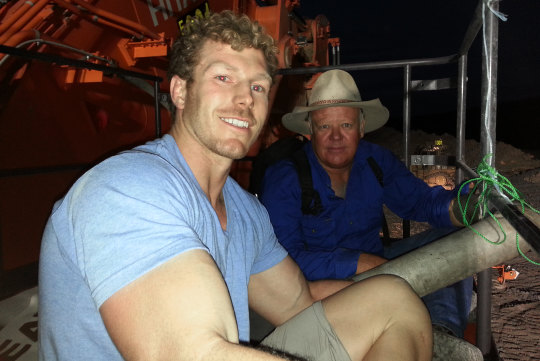 It is all the more striking, then, that Pocock in person is extremely reserved. A self-described introvert, he says he spoke to more people on the campaign trail than he has in the past decade.

“I’m not great at small talk,” he says in an interview with the Herald and The Age. “But talking about issues that are interesting and that I believe in, I love it.”

He lacks the bombastic, brash personality that has helped catapult others onto the Senate crossbench and is cut from a decidedly different cloth to the mercurial and unvarnished Lambie or One Nation’s Pauline Hanson. Quiet and contemplative, his sentences are punctuated by long pauses as he converts thoughts into words.

“One of the downsides is that it can come across as arrogance because you’re a little bit quieter than people expect and maybe seem aloof. But sometimes you just don’t want to talk,” he says.

Lambie, for what it’s worth, says Pocock will be no pushover in the Senate, but confesses she was among the many sceptics who doubted he would make it.

“I told him ‘I admire you, but there’s no way you’ll win’,” she tells this masthead, relaying a chat she had with Pocock after he announced his campaign. “We’re all still laughing about it.”

As candidates go, Pocock was a unicorn that political strategists dream of finding, capable of peeling votes away from both Liberals and Labor. His profile was established, his progressive bona fides well-known and his rugby career would help endear him to conservative voters not rusted on to the Liberal Party, or so the thinking went.

But history and precedent were stacked against him – no independent had ever disrupted the major-party duopoly and won an ACT Senate seat. A confluence of circumstances cracked open a window of possibility. As the bell tolled on the last Parliament, a series of scandals and policy missteps had beleaguered the Morrison government and the Liberals were on the nose around the country.

In the ACT – where Labor has been in power for two decades at a territory level (in more recent times, in formal coalition with the Greens), Liberal senator Zed Seselja’s ultra-conservative brand of politics was seen as a particular weakness, including by some in his own party. If ever Pocock was going to run, this was the election to do it. 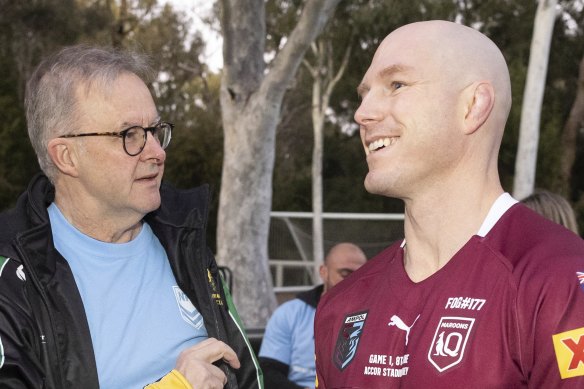 “I had a bunch of people in Canberra last year hassling me, saying a lot of people might not think this, but we really do: there is a pathway for an independent senator if we can get the right candidate,” Pocock says.

“I thought, if I don’t actually just have a crack at this I’m going to regret it. I didn’t want to be sitting around after the election or in a few years, thinking ‘I wonder what would have happened if I had run?’.”

By securing more than 20 per cent of first preferences, Pocock leapfrogged Seselja into the second Senate spot, upending four decades of political lore that ACT voters would only ever send one Liberal and one Labor senator to the red chamber.

His political career marks the next chapter for the Zimbabwean boy who dreamt of playing for the Springboks but became a Wallaby instead. Widely lauded as one of rugby’s greatest ever players, Pocock officially retired from international competition in 2020, having played 83 tests for Australia, including as captain for the 2012 season.

Does he miss it?

Nonetheless, he pulled on a Queensland jersey (borrowed from Canberra Raiders veteran Josh Papalii) this week as he took to the field for the Parliamentary Friends of Rugby League’s annual State of Origin touch football match. Albanese, an avid NRL fan who had been drafted for the NSW team, called it the “greatest scandal” since South Sydney legend Greg Inglis chose the maroon jersey over the blues.

It has only fuelled speculation inside the Canberra press gallery that Pocock will again emerge from retirement for the annual “pollies v press” rugby match. Will he join the likes of Nationals MP Barnaby Joyce, a fixture in the politicians’ side, and lace up his boots once again?

“I don’t know what position [Joyce] plays. We could be a good combo. That’s the great thing about sport, it brings people together.”

Gabby and Laurel fight over Kit in Emmerdale as he has sex with them both?
Recent Posts