Revealed: Shocking truth about those calorie-counted supermarket meals! Our scientific test showed they can have up to 43pc more calories than they claim on the packet

How was your weekend, did you eat out at all? If you ventured into a restaurant or pub chain — you’ll have noticed a new, hugely controversial addition to the menu. Calorie counts.

Earlier this month, all of those employing more than 250 people were required by law to report the calorific content of individual dishes.

It’s been a divisive move. The Department of Health claims it will help us make healthier decisions, but restaurateurs say it’ll turn an occasional treat into a guilt trip. 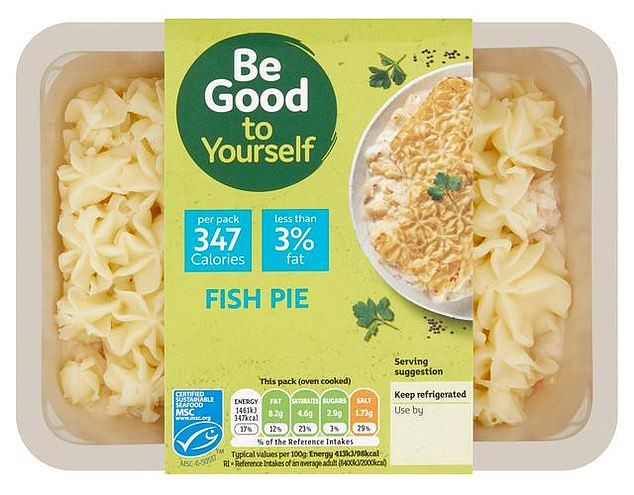 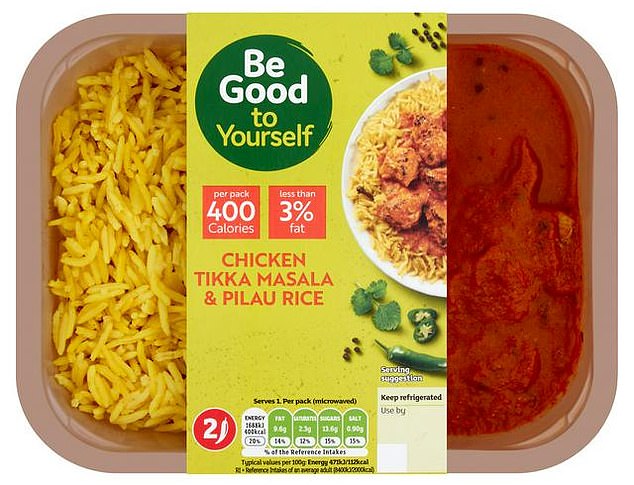 Calories on pack: 400 calories in test: 446. Be Good To Yourself chicken tikka masala & pilau rice, £3 Difference in calories: 46 Difference as a percentage: 12pc 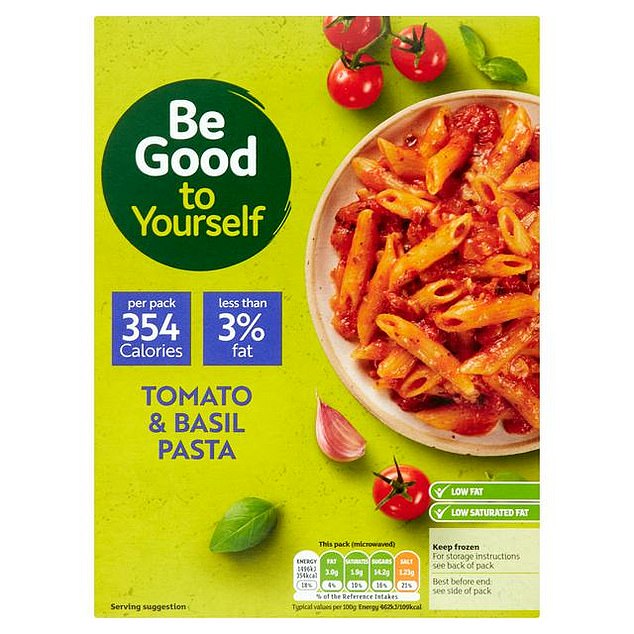 Many women are likely to fall in the latter camp: when flagged up on the menu at more than 850 calories, that delicious pub roast suddenly seems less small indulgence, more full-blown splurge.

Because the truth is, millions of women still swear by calorie counting, either as a means of losing weight or just not gaining it. Women who could claim calories as a specialist subject on Mastermind. Lowest calorie alcoholic drink? Vodka, soda and lime at 106! Best low-cal sweet treat? A Freddo chocolate bar at 95 calories.

While detractors argue against the effectiveness of this dieting method because not all calories are created equal — those in nuts aren’t as fattening as the ones in cake, for example — old-school counters love its simplicity in the face of today’s increasingly complicated diet and fitness culture. 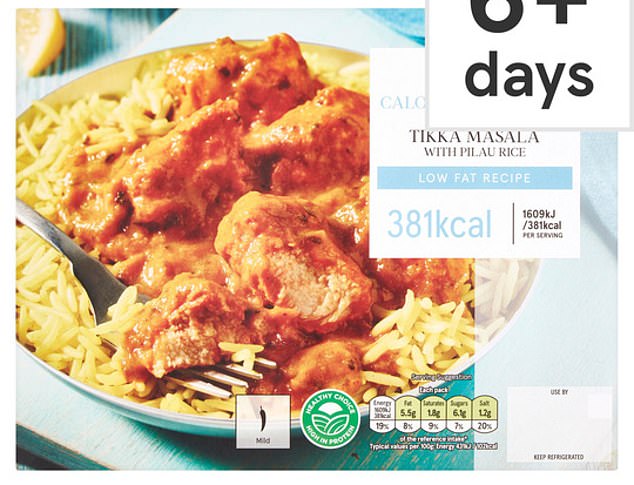 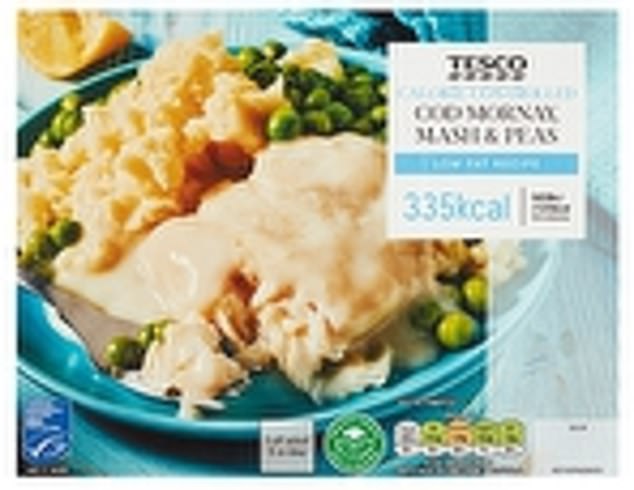 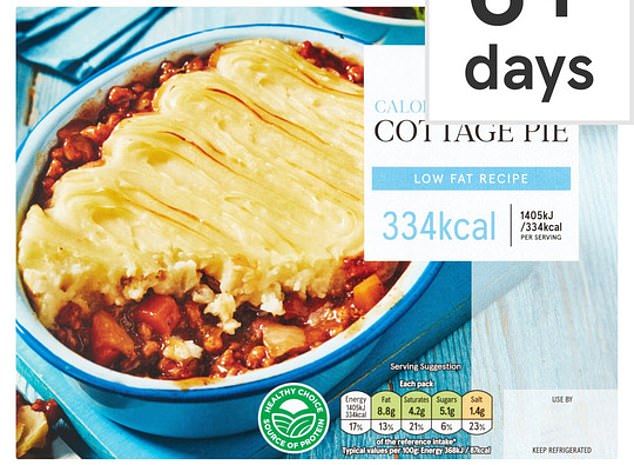 Of course, if you’re eating at home, ready meals have long come with a calorie count — and for anyone doing diet-maths they’re often seen as a godsend. Almost every supermarket has them, complete with reassuring range names — Count On Us, Be Good To Yourself — and the calorie count on the front. The presumption is that they’ve done all the hard work for you.

As the restaurant industry sighs in frustration at having to include them, for the diet ready meal business, it’s what makes us buy their products.

HOW WE DID OUR TESTING

The ready meals were frozen in an industrial freezer at -80c (-112f). They were then weighed before being ground into a fine powder and thoroughly mixed.

The bomb calorimeter only tests a very small sample — about 1.5g, rather than the entire meal which weighs roughly 300g — so you calculate the calories in 1.5g and then multiply that figure to get the calorie count of the whole meal.

The machine measures the amount of heat released when the sample is burned in a sealed metal cylinder. Rather than just testing onesample from each meal, three samples from each were tested, and the average was used.

In most cases, the three samples gave roughly the same results with a difference of only five to ten calories between the lowest figure and the highest.

There were notable exceptions. The two fish dishes, from Sainsbury’s and M&S, showed large variations between the samples. In the case of M&S, the lowest figure was 414 calories, and the highest a whopping 501 calories.

‘It’s difficult to know why the fish-based meals seemed to show so much variation,’ says Dr Stubberfield. ‘It could be that there’s just more going on with these, because there are more components involved — unlike, say, pasta and sauce.’

It is worth noting that with the M&S meal, even the lowest test figure — 414 calories — was almost 100 calories higher than the 316 calories advertised on the pack.

But how reliable are these calorie counts? Are we right to blindly accept the number on the packaging? We put them to the test.

Choosing three different calorie-counted meals from four different supermarkets, we subjected them to a rigorous, lab-based process to see how closely the actual calorie count related to that on the label.

Astonishingly, of the 12 different meals we tested — a mix of fresh and frozen, from Asda, Marks & Spencer, Sainsbury’s and Tesco — every one contained more calories than printed on the packet.

In some cases, it was only 15 calories but in others it was more than 100. This means if you’re relying on ready meals to lose weight — say, eating one for lunch, and another for dinner— you could be consuming 200 calories more than you think you are every day. It’s enough to make you rageeat an entire box of Curly Wurlys.

So how did we uncover these shocking discrepancies? There are various ways food manufacturers calculate nutritional information. They can simply input the details of their recipe — the number of grams of potatoes, etc. — into a piece of software that uses information from a government-approved database to calculate the figures.

A more accurate method is to use a bomb calorimeter, the industry gold standard. Analytical technician Dr Jon Stubberfield runs the nutritional analysis service at the University of Nottingham’s Food, Nutrition and Dietetics department, his lab regularly collaborating with food firms. He agreed to carry out this exclusive research on our behalf.

According to dietitian Aisling Pigott, there may be various reasons for the discrepancies. ‘Nutritional analysis software may be based on nutrient databases that use historical information,’ she says.

The government-approved database that’s most frequently used — McCance and Widdowson’s The Composition Of Foods integrated dataset — contains information from studies from as early as the 1960s. ‘Science and accuracy has moved on since then,’ adds Aisling.

She also points out that databases such as these often give a range of values. ‘I imagine that where they find a range, they opt for the lower end as that suits their products.’ If you want to create a ‘diet’ meal, then it makes sense to minimise the calorie count.

And with natural ingredients, there’s bound to be some variability. ‘Food isn’t exact,’ says Aisling. ‘One banana may have a different nutrient profile from another banana due to where in the world it was grown, when it was grown, and when it was picked.’ That’s all well and good, but surely there must be some legislation that protects the consumer if they’re buying what they think is a 316-­calorie meal and it turns out to contain 100 calories more?

Staggeringly, there isn’t. When it comes to calories, the law doesn’t work in that way. 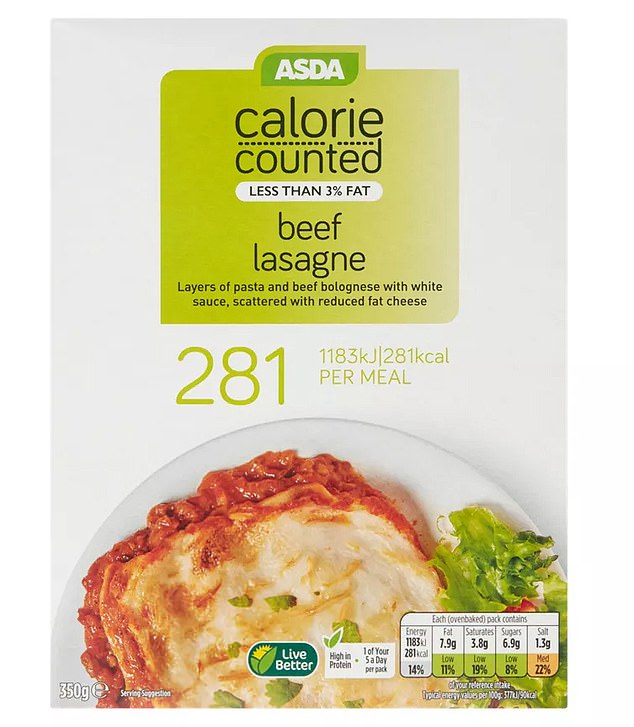 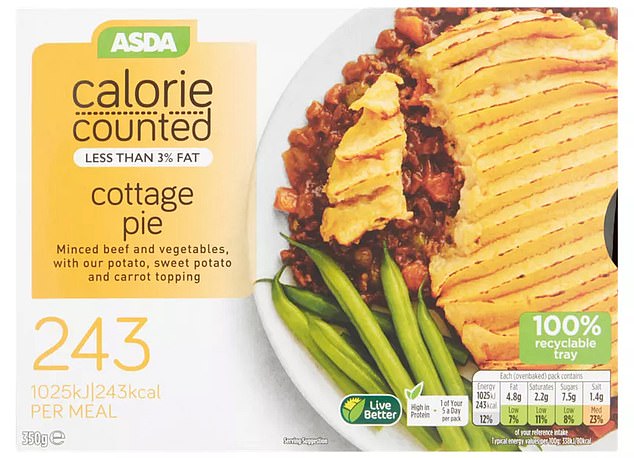 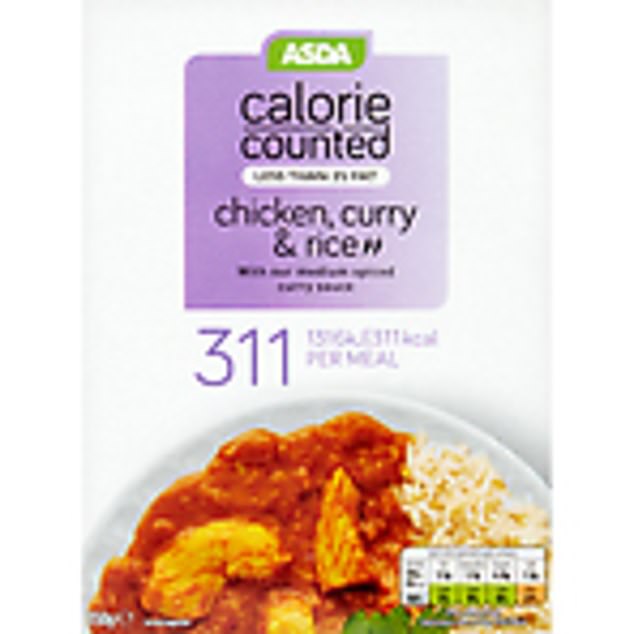 Although the guidance tells manufacturers that the ‘­nutrient content of foods should not deviate substantially from labelled values to the extent that such deviations could lead to consumers being misled’, in reality, the way the legislation is worded means companies only have to show they’ve done the right research and sums — not that they’ve got the answer right.

When it comes to quantities of nutrients such as fats and sugars, there are ‘tolerances’ or margins of error.

But when it comes to calories there are no published or stated tolerances. (As a point of comparison, the government guidance for restaurants on stating the calorie count of dishes advises that ‘a tolerance of plus or minus 20 per cent would be considered an acceptable margin of difference between actual and declared calorie values.’) 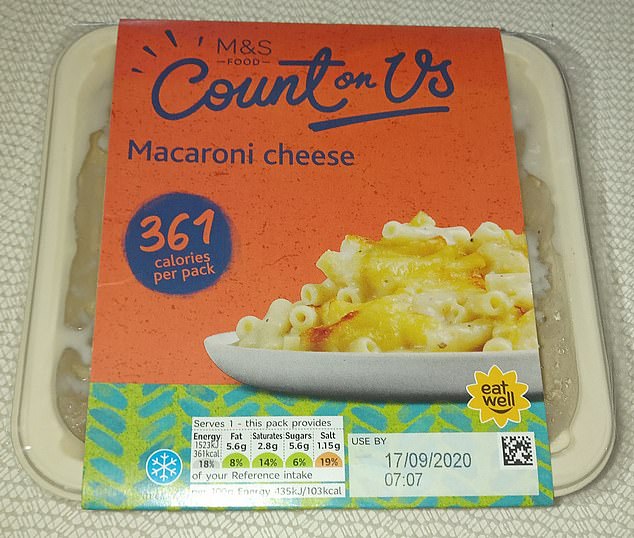 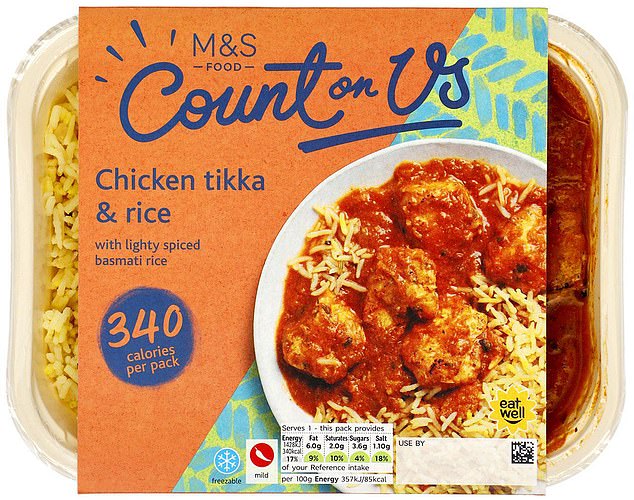 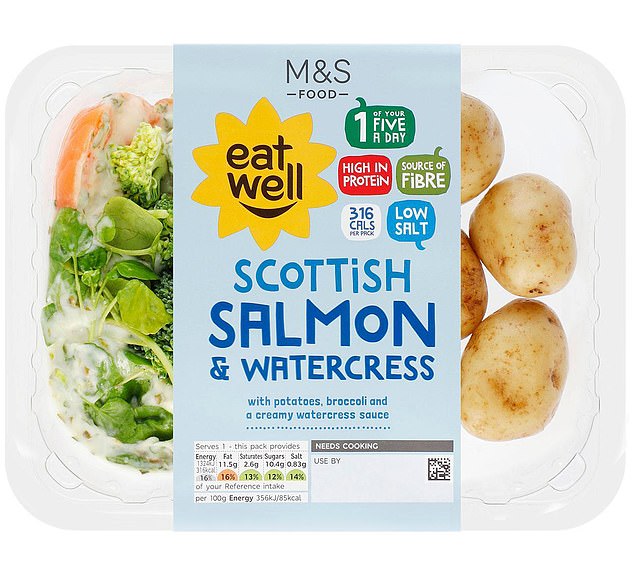 So should we just ditch calorie counts on food products altogether? Many experts believe so, arguing they’re a blunt instrument. However, others think that calorie counting can be useful.

‘Calorie counting makes you aware of what you’re putting into your body,’ says Mari-Carmen Sanchez-Morris, a women’s health and fitness coach (maricarmenfitness. com). ‘I really believe calorie counting is the most sustainable way to lose — or maintain — weight.’

While she suggests that where possible, clients cook meals from scratch, she acknowledges ready meals can help women with busy lives. But she was shocked by the results of our research and unimpressed with the law that seems to protect the supermarkets.

‘There needs to be something on the front of the pack to say the calorie count isn’t exact, and that there might be more calories.

But, if they don’t need to do it from a legal perspective, from a marketing point of view, why would they?’

Next time you reach for a calorie-counted ready meal, keep your wits about you. If it looks — and tastes — too good to be true, it probably is…

Sainsbury’s: Supermarkets conduct their own industry-approved levels of testing and small variants in the result could be for a range of reasons, including how the test itself was conducted.

Tesco: We comply with the Food Information Regulations (FIR), which is applicable under UK food law. These require us to calculate energy values from the nutrients present in a product combined with legally-defined energyconversion factors. Ready-meal products in the caloriecontrolled range are chemically analysed for their nutritional content and label information is presented in line with the FIR.

Labels provide the best estimation of the nutritional content of a product. While there may be some small variations owing to factors like seasonality or processing variations, they are accurate and follow the FIRs closely.

Asda: Providing accurate information to our customers is extremely important to us, which is why we regularly test all of our products in accredited laboratories to make sure they adhere to government-approved standards. All of the named ready meals have recently passed these stringent tests confirming that the information on the labelling is correct.

Marks & Spencer: We are committed to helping our customers make healthier food choices, both through the products we sell and the clear onpack information and labelling we provide. While we don’t recognise the methodology used, we always want to understand more and our nutrition team will contact NottinghamUniversity about its research. We undertake rigorous and regular nutritional analysis of all of our products, which is verified by independent testing