Scott Morrison needs the ‘cavemen’ of WA to move past COVID

At the height of Scott Morrison’s frustration over Western Australia’s refusal to reopen its borders during the COVID-19 pandemic, the prime minister likened recalcitrant states to cavemen.

“Now it’s like that movie The Croods,” he told the Today show in August last year, in reference to the children’s film set in a fictional prehistoric era. 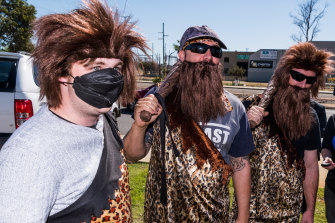 Men dressed as cavemen awaited Scott Morrison at a Bunnings in Perth.Credit:James Brickwood

When Morrison arrived at a Bunnings in Perth’s northern suburbs on Monday, there were three men dressed in cavemen costumes carrying wooden bats waiting outside.

The trio only answered questions with “ooga booga”, but they gestured that they wanted Labor leader Anthony Albanese to be prime minister over Morrison.

Western Australia is key to the opposition’s hopes of winning government. Labor is hoping West Australians are still furious with Morrison for siding with Clive Palmer over their uber-popular Labor premier Mark McGowan on the question of border closures.

Taking advantage of the politics of COVID, McGowan was re-elected last year in the most decisive result in any Australian state or federal election since Federation, winning 53 out of 59 of the seats. 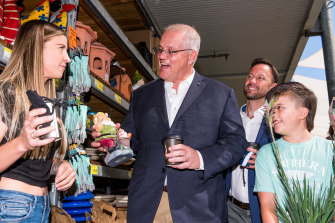 Morrison and his team are now hoping locals are starting to move on from pandemic politics since opening its borders last month. During his two-day visit to Perth, Morrison attempted to switch the conversation to the economy, promising to create almost 5000 jobs over 10 years through key resource investments in the mining state.

The trouble for the Coalition is the pandemic still smacks you in the face everywhere in this state, which was shut off from the rest of the country for two years. On flying into Perth, the travelling media were met by a police officer right outside the plane demanding everyone show a vaccine certificate and download an app.

Masks are still compulsory in all indoor settings, and many pubs and restaurants stamp you on the arm after showing proof of vaccination. “VAX CHECKED” one stamp read.

But the contest in the state has tightened in recent weeks.

Earlier this year, Labor operatives were buoyant about the prospect of winning three seats off the Coalition: Swan, Pearce and Hasluck.

Now both sides say Hasluck is less likely to change hands and the contest is down to Pearce and Swan.

The Liberals are extremely worried about Pearce, situated in Perth’s outer northern suburbs and held by the Liberals on a 5.2 per cent margin.

Former attorney-general Christian Porter, who last year face historic rape allegations that he denied, is retiring. Polling conducted by the Liberals last year was dire, but sources from both sides predict it will now be a tighter contest since the party preselected Linda Aitken.

A quick look at the electoral map shows why Labor needs Swan and Pearce to win government.

Labor must win eight seats to govern in its own right.

The party has its sights on those two WA seats, Boothby in South Australia, Chisholm and Hawke in Victoria, Bass and Braddon in Tasmania, and one seat in Queensland.

But the problem with Labor’s narrow path to victory is it can’t drop any of its own seats.

The Bunnings where Morrison visited on Monday was in Labor Anne Aly’s electorate of Cowan, held on a razor-thin margin of 0.9 per cent, and due to a boundary change, she is facing another sitting MP – Vince Connelly from the abolished seat of Stirling.

The Coalition is throwing a lot at Cowan, in the hope that it can offset losses elsewhere.

The lingering question they are pondering is this: Are West Australians still angry at being likened to Neanderthals or have they evolved?

Jacqueline Maley cuts through the noise of the federal election campaign with news, views and expert analysis. Sign up to our Australia Votes 2022 newsletter here.