Wendy Osefo got into an explosive argument with Gizelle Bryant on Sunday’s episode of “The Real Housewives of Potomac” after Ashley Darby brought up rumors that Osefo’s husband, Eddie Osefo, was having an affair.

“Gizelle told me how there is this fabricated article about Eddie or whatever having an affair or something,” Darby, 33, told Osefo, 37, during a one-on-one conversation.

“This has been discussed, if that’s one of the reasons why you are stepping into being more like sexual, why you and Eddie are more free, because you’re showing people there obviously is no truth to that,” Darby continued.

Wendy then got defensive, responding, “We’re not talking about it because that’s a lie. Thank you so much for trying to find this opportunity to try to attack my marriage.”

Darby quickly hit back, asking, “Why is this where you’re choosing to go? Why are you getting so defensive?”

“First of all, the fact that you’re bringing this to me, I find that laughable,” Wendy said before asking why Bryant, 50, didn’t confront her directly.

Darby explained that Bryant was just coming from a place of concern, saying, “I promise you Gizelle and I never talked about you maliciously. This is not only something we talked about to be like, ‘Hahaha.’ I’m serious.”

Wendy was skeptical, however, calling Bryant a “spawn of the devil.”

“I feel like it is because that’s Gizelle’s personality in her heart,” she added.

Both women then joined the rest of their castmates as the drama continued to unfold.

“Ashley brought to me something in which she said you guys saw in the blog,” Wendy told the women. “Let’s be very clear: Don’t attack my husband because that’s something I do not play with.”

Bryant then asked, “Why are you looking at me?”

“I’m looking at you because it was you having the conversation with Ashley,” Wendy shot back, noting that the rumors were “false.”

Wendy then told Bryant, “Instead of you coming to me as a woman, you decide to talk to Ashley, and so, I’m putting your ass on notice because what you’re not going to do — let’s be very clear — is you’re not going to play with my husband’s name. Don’t f–k with my family.” 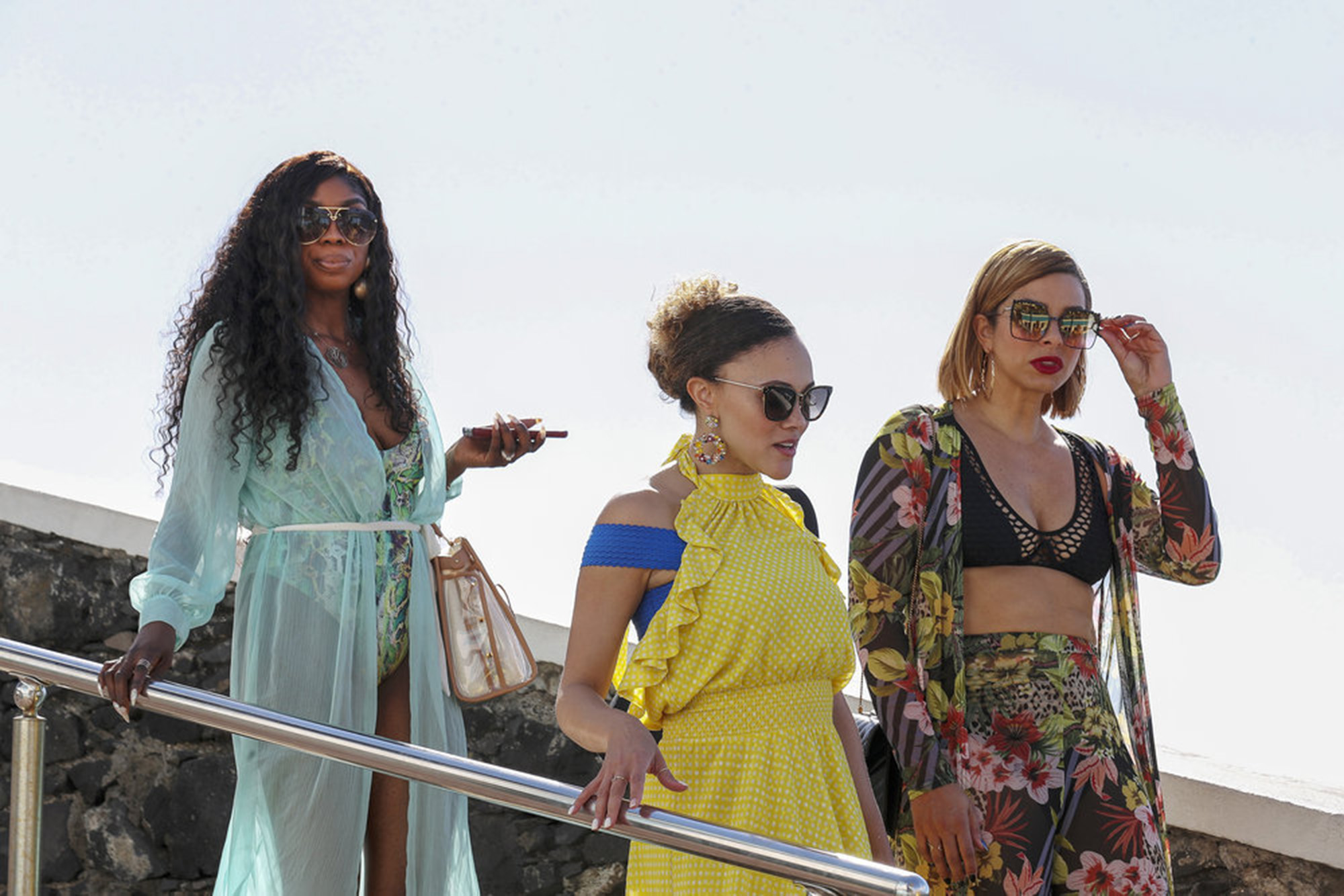 But Bryant asserted that she hadn’t done anything wrong.

“I don’t care if you say it meanly. I don’t give a s–t,” she said. “Wendy, I told [Ashley] and I’m telling you: I’m saying that I didn’t believe it, if we sat there and was like, ‘I wonder who the girl is and I wonder who it is,’ that’s one thing. We sat there and immediately said, ‘This is not true.’ The end.”

The women finally tried to apologize to Wendy, but she launched into an expletive-filled rant about Bryant.

“She doesn’t understand the parameters regarding people’s husbands because she doesn’t have a relationship that holds water. I see you for everything everybody ever said that you were,” she began.

“What’s so funny, the life you’re living now, is exactly God paying you back for all the bulls–t you’ve done. So live in your motherf–king truth because God is paying your ass back. That’s real s–t. You want to fire shots, baby girl, I got the motherf–king bazooka. I will drag you up and down the street over my husband. Don’t play with me.”

She then walked back into the room and challenged Bryant to go head-to-head, saying, “If you want to go, we can get it popping.”

“I knew you and Jamal [Bryant] before I came on this f–king show. We’re not talking about blogs anymore, baby girl. Imagine being with a man that constantly cheats on you all the time and sleeps around all of Baltimore, and everyone knows that but you continuously be with this person and think he’s worthy enough to bring him around your daughter? Like, you know how low of a self-esteem you have to have?”

When Darby noted that she wasn’t expecting such a visceral response, the other women questioned why she brought up the rumor in the first place.

Co-star Candiace Dillard told her, “Leave it online, then. I’ve never bought anything from a motherf—king blog to you.”

Dillard, 34, added, “The fact that you brought that s–t into the group tells me what I need you know about you. Get the f–k out.”

“The Real Housewives of Potomac” airs Sundays at 8 p.m. ET on Bravo.

The Fassbenders go for a stroll in Spain, more celebrity pics for Aug. 23-28, 2021
Recent Posts