On a rare week when I was able to get back to the commercial galleries there were a few tempting propositions. Chief among them, Peter Godwin's Mask, Music and Studio at Defiance at Mary Place (until July 25) – a really tough collection of still lifes that push the boundaries of the genre, picking up where Braque left off.

The other stand-out was Lucy Culliton's Bibbenluke Botanicals at the King Street Gallery on William (until August 3), another still life show but this time painted with a ferocious attention to detail. 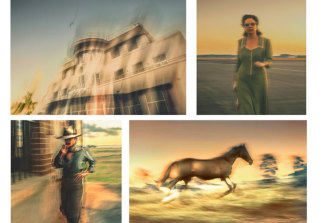 Tracey Moffatt’s The Airport, top, and The Outlaw (2019), diptychs from the series Portals.Credit:Courtesy of the artist and Roslyn Oxley9 Gallery, Sydney

Godwin and Culliton are artists working at the peak of their powers, but I've written a great deal about each of them in the past. The event that most appealed on this non-institutional week was a mixture of old and new at the Roslyn Oxley9 Gallery: Tracey Moffatt's Portals and Kirtika Kain's Corpus.

At the end of the millennium no Australian artist was hotter property than Tracey Moffatt. She ticked all the boxes being multimedia, talented, articulate, glamorous and Indigenous. As a celebrity she was universally known as "Tracey", the surname being redundant. The logical place for an art celebrity was New York City, where she relocated in 1996.

In 2010 Moffatt returned to Australia, saying she still loved New York but missed nature. For those who followed her career closely it seemed this was only part of the story. When Moffatt arrived in the United States she was an emerging international art star, but over the years her work began to lose its edge and her brilliant career waned.

The return to her roots has done the prodigal a lot of good. The photos and films Moffatt showed in the Australian pavilion at the 2017 Venice Biennale were the strongest things she had produced in a decade. She had gone back to the "photodrama" approach, teasing us with a series of images hinting at an underlying narrative. The setting was apparently Australia, but it could have been somewhere else. 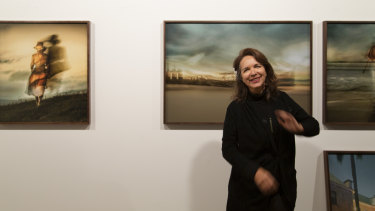 Tracey Moffatt in the storeroom of the Roslyn Oxley9 Gallery for a test hang of Portals.Credit:Luis Power

In this new exhibition she continues in the same vein with a series of six photographic diptychs, each consisting of a figure and a landscape. Once again the settings are unidentified, although in one work some viewers will recognise the hulk of the S.S. Maheno, the hospital ship washed up on Fraser Island in 1935.

Each figure is a self-portrait featuring Moffatt in different roles. She is a nurse in The Hospital Ship, an intrepid woman of the bush in The Outlaw. The images are deliberately blurred, a device that suggests faltering memories of long-gone days. There are distant echoes of Something More (1989), still possibly her most popular photo-sequence, with its fragmentary tale of a young woman in nowhereville looking for a way out. 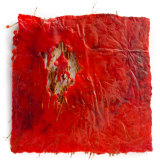 Moffatt's Portals are windows onto the past, or at least onto her personal sense of fantasy, although we are in no position to distinguish autobiography from fiction. It's like watching an old film of which only a few brief sequences remain, leaving us the task of filling in the blanks. Presumably there was never anything more to this display than a collection of suggestive images, but Moffatt understands that viewers have an instinctive need to search for stories. Regardless of what the artist puts into a work, we form our own relationship with it.

This studied ambiguity is Moffatt's greatest asset. The most intriguing part of the series is not what she gives us, but what she holds back. We register all the Australiana – the bush, the beach, the dirt road that stretches to the horizon – but the places and the lead actors remain nameless. The resemblance to film stills means that movies keep springing to mind. The figure clutching a suitcase in The Departure-Arrival made me think of Trilby Comeway departing for the city at the end of Bruce Beresford's The Fringe Dwellers (1986); and of the stylish Tilly Dunnage arriving in town in Jocelyn Moorhouse's The Dressmaker (2015). If we wanted to find Tracey's own story we might start looking somewhere between Trilby and Tilly.

Moffatt's co-exhibitor, Kirtika Kain, was hailed as an emerging talent when she graduated with a Masters degree from the National Art School last year, and has built on those plaudits by being immediately picked up by the perennially trendy Roslyn Oxley9. Her debut exhibition in Oxley's smaller gallery is really impressive, showing a willingness to experiment with materials and flirt with chaos that most artists don't achieve until much later in their careers.

Kain's background has influenced her work in several ways. She comes from a migrant family, which usually ensures a serious work ethic. Because her family were classed as Dalits, or Untouchables, she has felt moved to investigate this age-old stigma that still flourishes in India. As a result she came across the reformist Dr Ambedkar, who wrote down the social rules that have determined the lives of the Dalit caste. She has reprinted these rules, over and over, on many of her works but not in the didactic manner we associate with artists who make a career from identity politics. 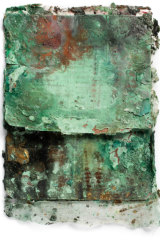 In Kain's works the text is virtually swallowed by tactile surfaces that contain an amazing array of materials: wax, clay, tar, gold, iron, copper, zinc, silver, charcoal, human hair, the straw from brooms and various kinds of powder. Each piece has its own distinct identity, with the poor materials alluding to the everyday lives of Dalits and rich ones suggesting a deeper, spiritual dimension. Some works are dense and opaque, others ragged in appearance. There are superficial resemblances with the so-called Matter Paintings of artists such as Jean Dubuffet or Alberto Burri, but the variety and small scale of the work creates a much more intimate effect.

The stand-out piece, and by far the largest work in the show, is Her – a sheet of handmade paper drenched in gold paint, worked and reworked until it resembles the kind of ruined, weathered artefact an archaeologist might excavate from an ancient tomb. It's a self-portrait of sorts, but also a defiant statement, with the gold withstanding every assault. Kain's surfaces may be scarred and battered, but her self-confidence is unshakeable.

Tracey Moffatt: Portals and Kirtika Kain: Corpus are at the Roslyn Oxley9 Gallery until August 3.