Luxury flats in a converted Cold War BUNKER built by the MoD in 1951 are expected to fetch £1.4million at auction – complete with a light-filled atrium, marble bathrooms and high-end kitchens

Luxury apartments in a renovated Cold War nuclear bunker formerly used as a museum are set to be sold at auction.

The bunker, located on Shrublands Road, in the historic Essex village of Mistley, was built in 1951 by the MoD to be used as a command centre for the deployment and firing of anti-aircraft defences, in the event of a nuclear war.

Made with 600mm reinforced concrete walls, the bunker was later bought by Essex County Council to serve as an emergency headquarters if Britain was to be attacked by the Soviet Union, although it was never used.

Now, after being bought by developers in 2016, the modular, concrete structure now houses two three-bedroom and one four-bedroom apartments, each enclosed by heavy blast doors.

The properties will be sold together as a joint lot at an Allsop auction on November 9, with a guide price of £1.4million. 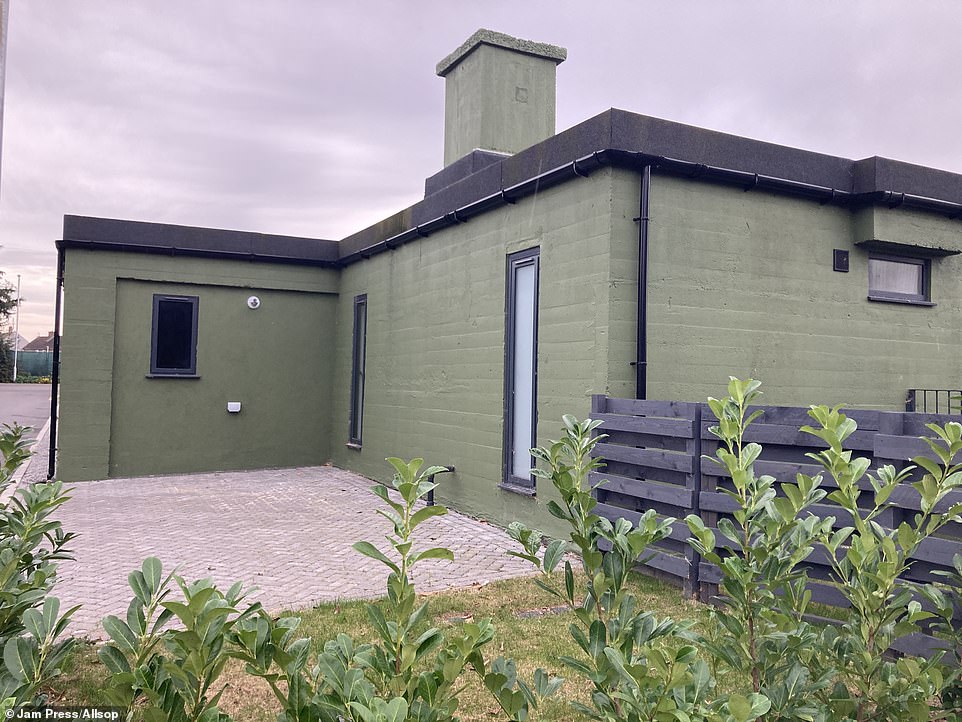 The bunker, located in the historic Essex village of Mistley, was built in 1951 by the MoD to be used as a command centre for the deployment and firing of anti-aircraft defences, in the event of a nuclear war. Pictured, from the street 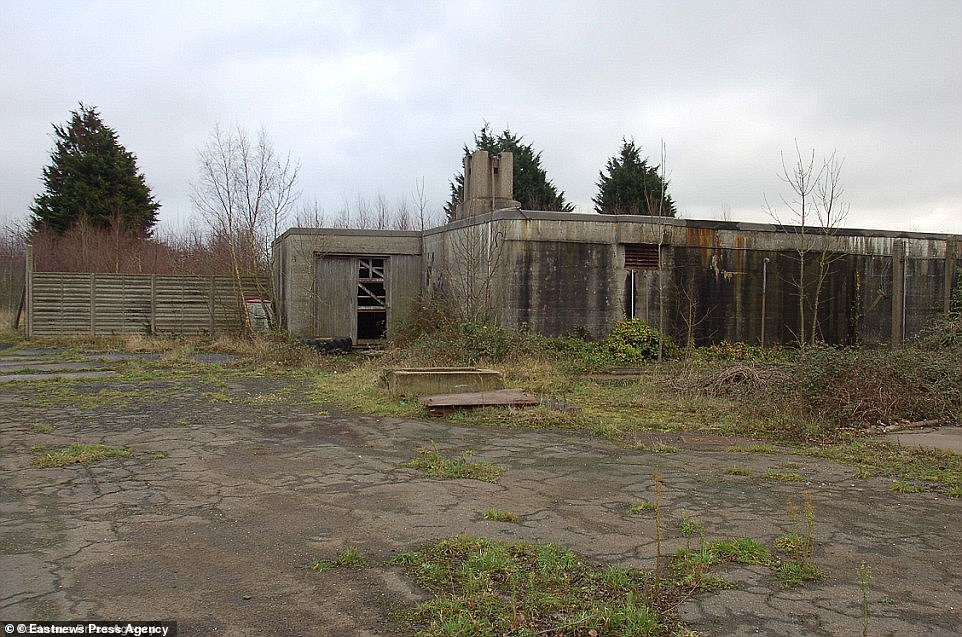 The bunker was later transformed into a museum but closed its doors in 2006, and the site fell into disrepair (pictured). It now houses two three-bedroom and one four-bedroom apartments, each enclosed by heavy blast doors 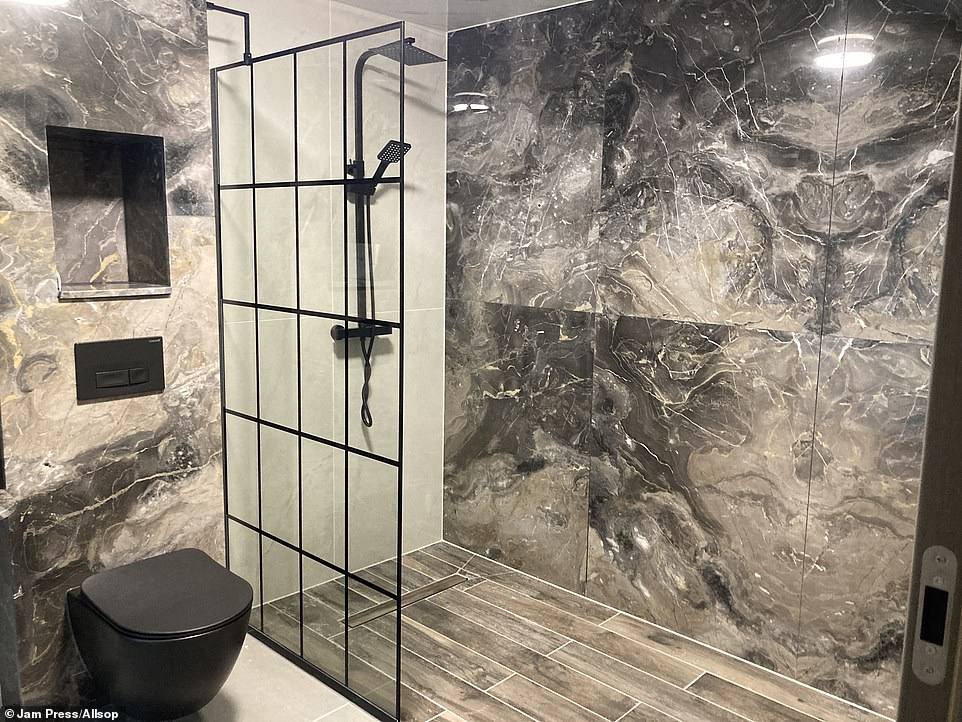 Luxury living: Each property comes complete with mod-cons including AEG kitchen appliances, granite worktops and Italian marble in the bathrooms (pictured). There are two three-bedroom properties and one four-bedroom property on offer 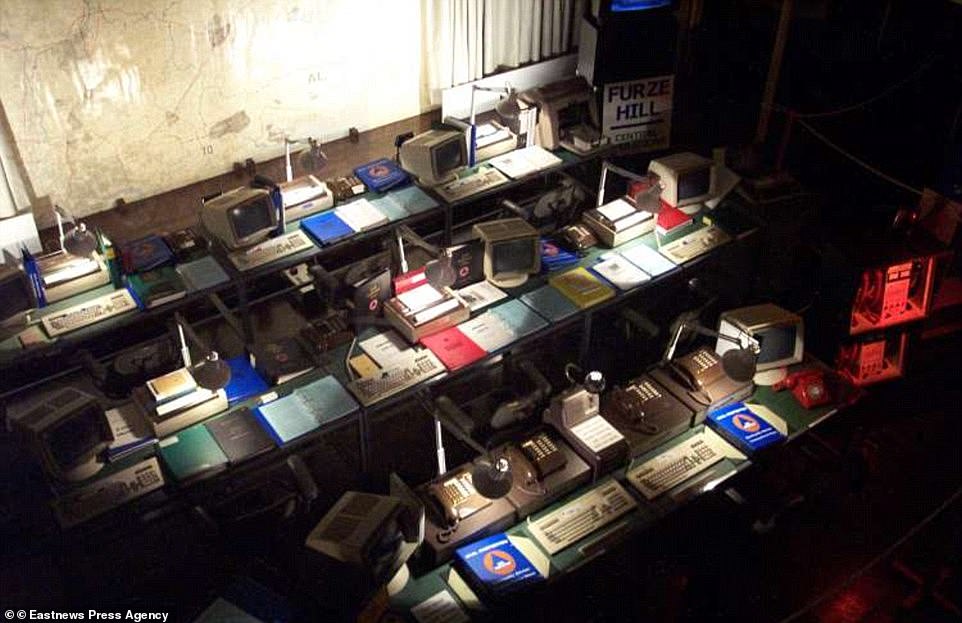 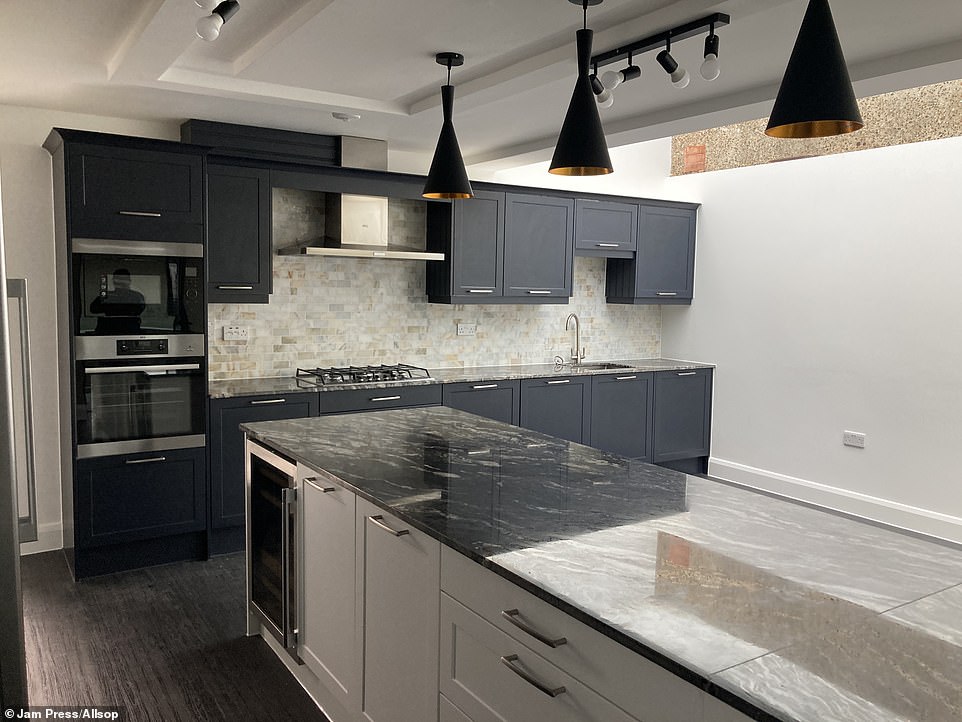 Modern amenities: The kitchen inside one of the properties features touches including marble countertops and a wine fridge 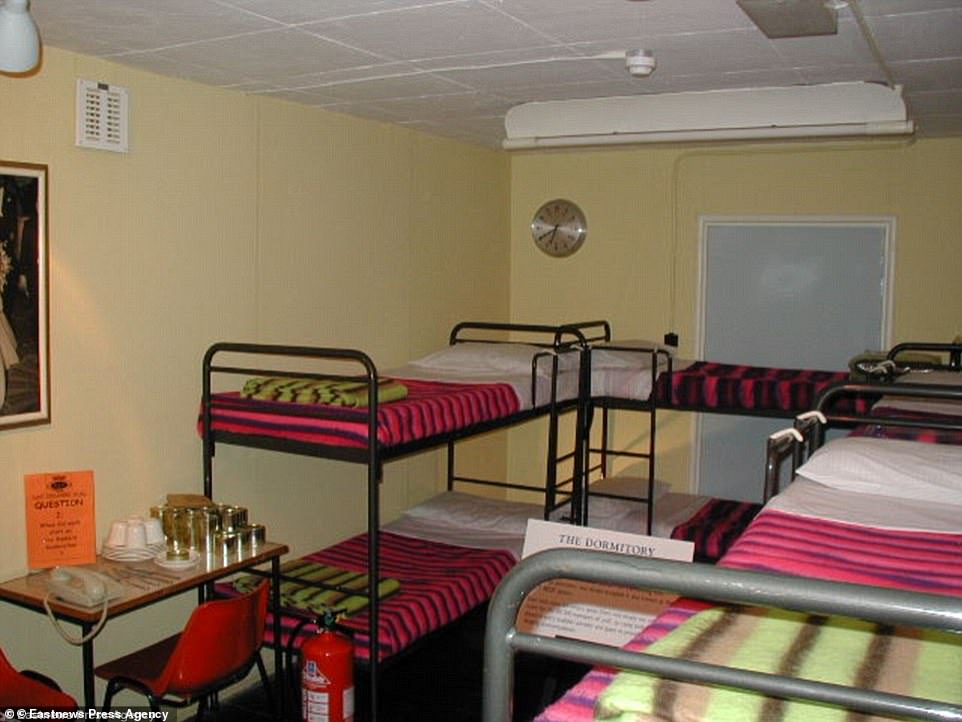 What life was like: While being used as a museum, the bedrooms were fitted with bunk beds to show visitors what life in a nuclear bunker would have been like during the Cold War 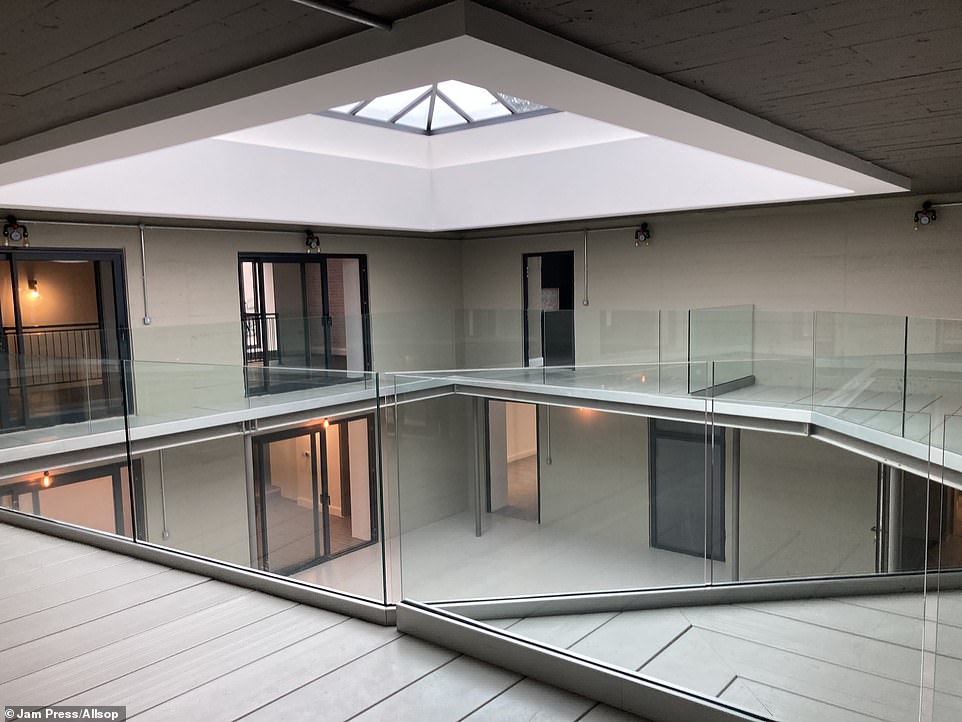 All the flats are connected by an atrium that welcome plenty of light. In order to keep as much of the natural light as possible, the rooms were fitted with bay windows

The bunker apartments have one floor above ground and one floor below, centered around a communal atrium with natural light flooding in.

Each property comes complete with mod-cons including AEG kitchen appliances, granite worktops and Italian marble in the bathrooms.

There is also underfloor heating without and carpeted flooring in the bedrooms, creating a cosy feel despite the unusual setting. The apartments also have access to private gardens and off-road parking.

One of the properties also features an original ventilation system housed behind a glass wall.

The development is tucked away in the village of Mistley, which offers various local shops, a popular restaurant and train station. It is just a short walk along the River Stour to the larger town of Manningtree. 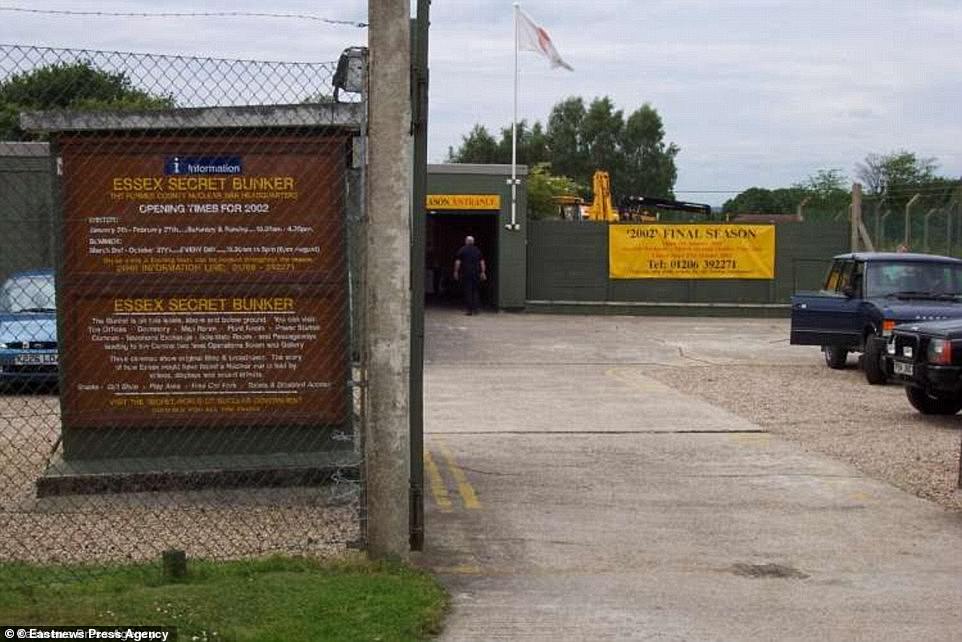 The bunker used to be an attraction known as ‘Essex Secret Bunker,’ pictured, until it closed in 2002. It will now home millionaires 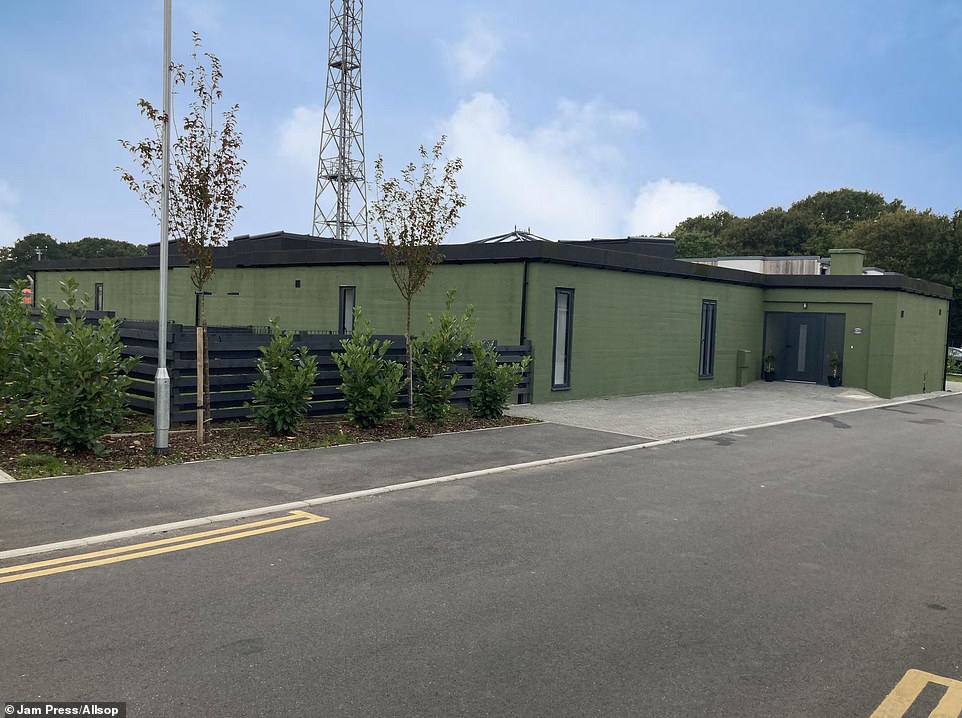 The three flats were painted green, and only one level is visible from the street. In 2013, a developer was refused planning permission when the Council of Tendring called their project for the bunker ‘an unnecessary eye-sore’ 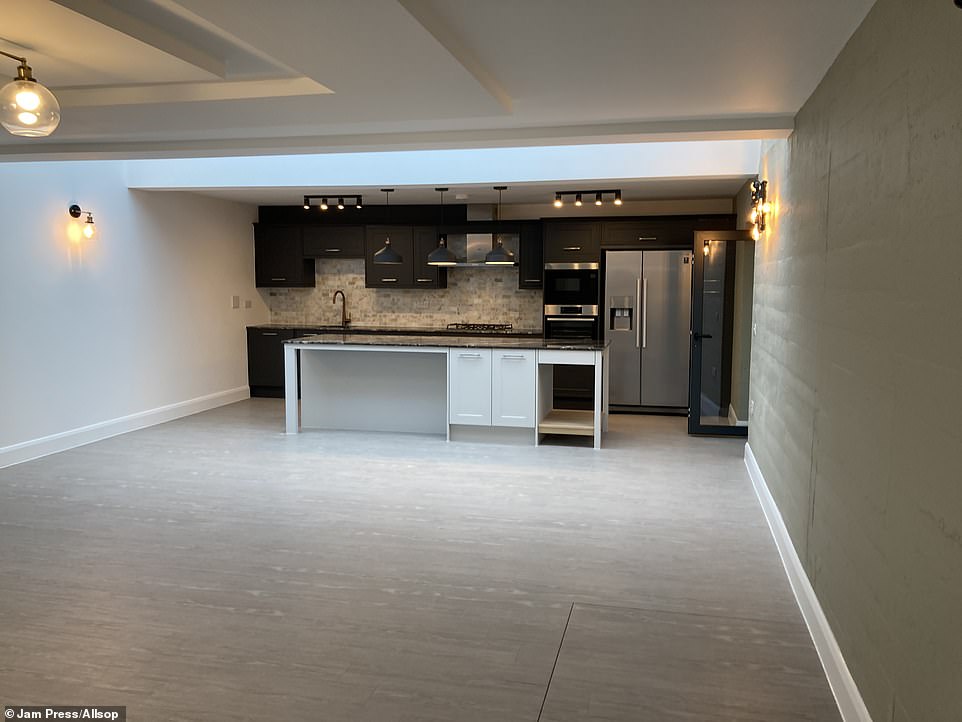 The three flats spread over 2,000sq metre of space, and all rooms are spacious, like this open-plane kitchen with a massive central island, pictured 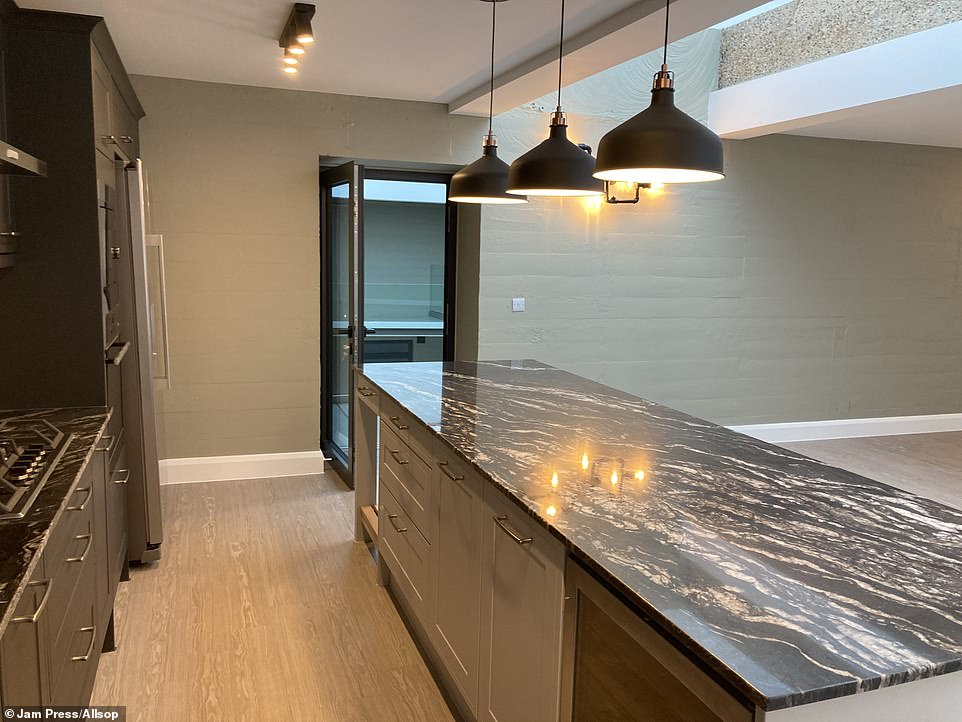 The subterranean level receives natural light thanks to skylights, pictured. The kitchen was also fitting with state-of-the-art appliances 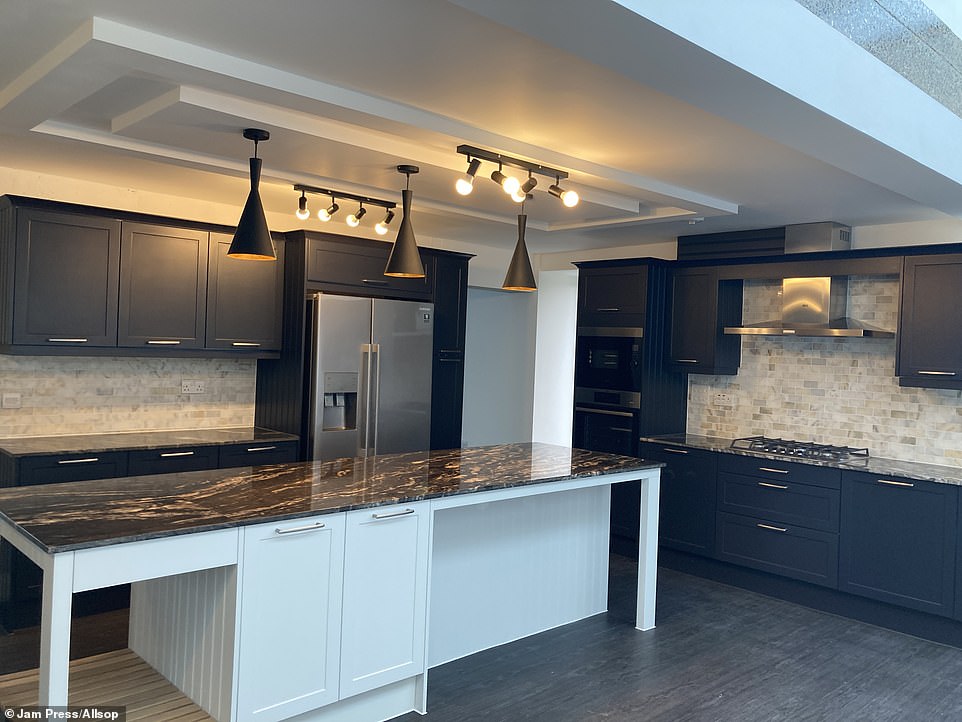 All the flats in the reconverted bunker have everything a keen cook would need to prepare a homely meal, pictured, with a two-door fridge and two ovens, pictured 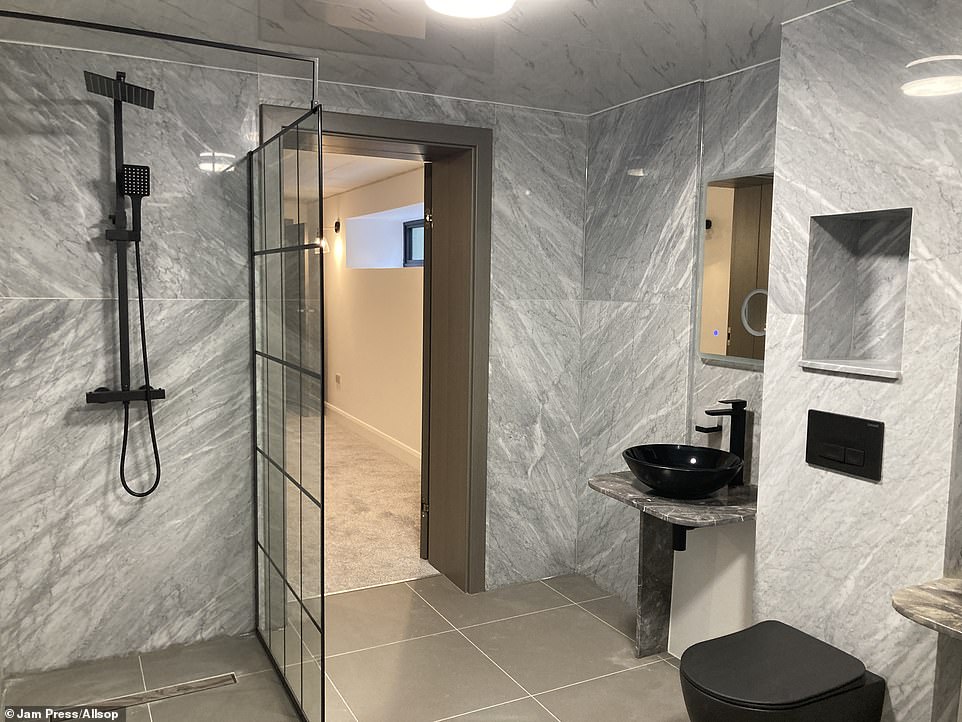 The shower room also boast plenty of space as well as storage, thanks to its massive Italian shower. It is connected to the rest of the house by a carpeted hallway, pictured 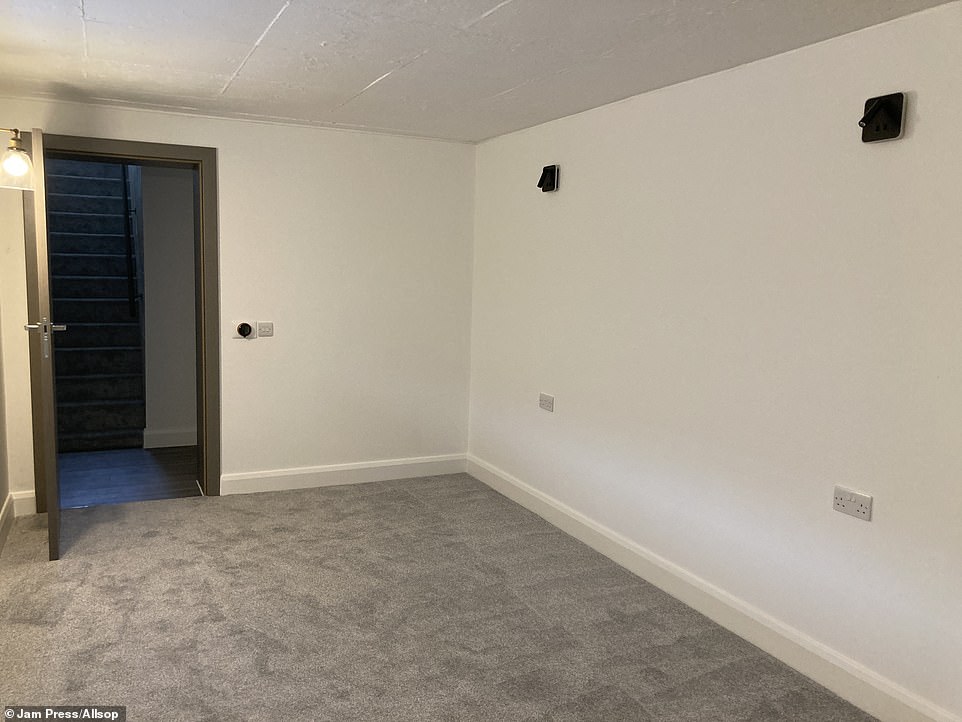 The bedrooms, some of which are located on the subterranean level, pictured, are cosy with white walls and fluffy grey carpeted floors, pictured

The residential development, carried out by BuildVantage, marks the latest chapter in the site’s fascinating history.

The bunker cost the MoD £500,000 to build and was intended to serve as a command centre for the deployment and firing of anti-aircraft defences.

In 1963 the bunker was purchased by Essex County Council from the War Office at a cost of £5,250 and became their emergency headquarters in the event of a nuclear war.

After the Cold War ended, it was turned into a museum, with accessories such as communication tools and sleeping quarters staged to show what life in the bunker would have been like for soldiers posted there. 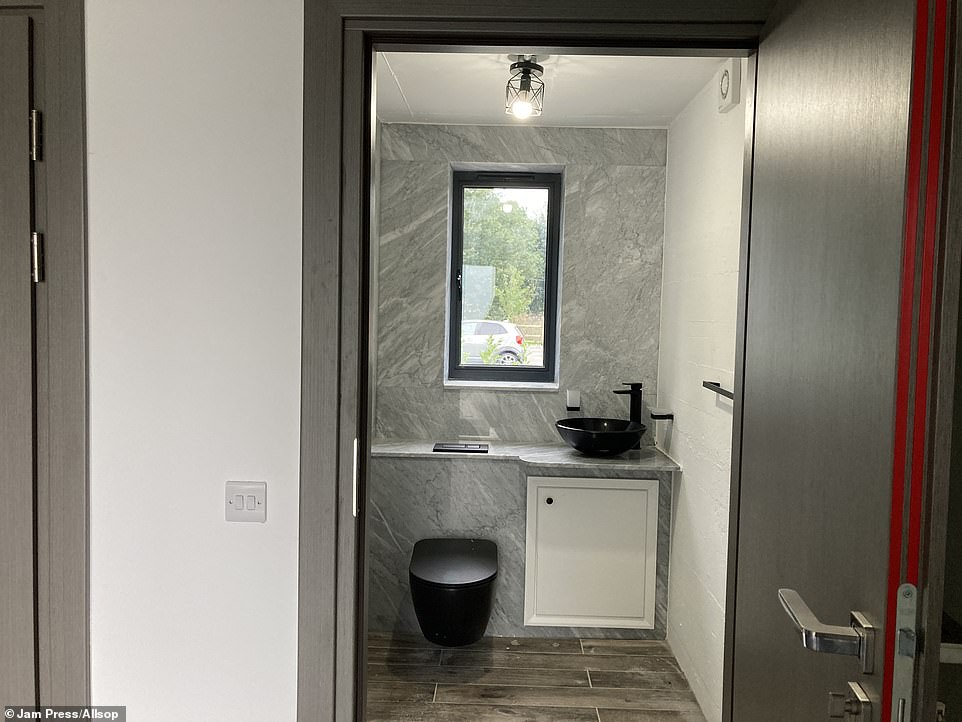 Another bathroom, this one located at street level. The three flats are connected by an atrium and spread over two floors, one being subterranean 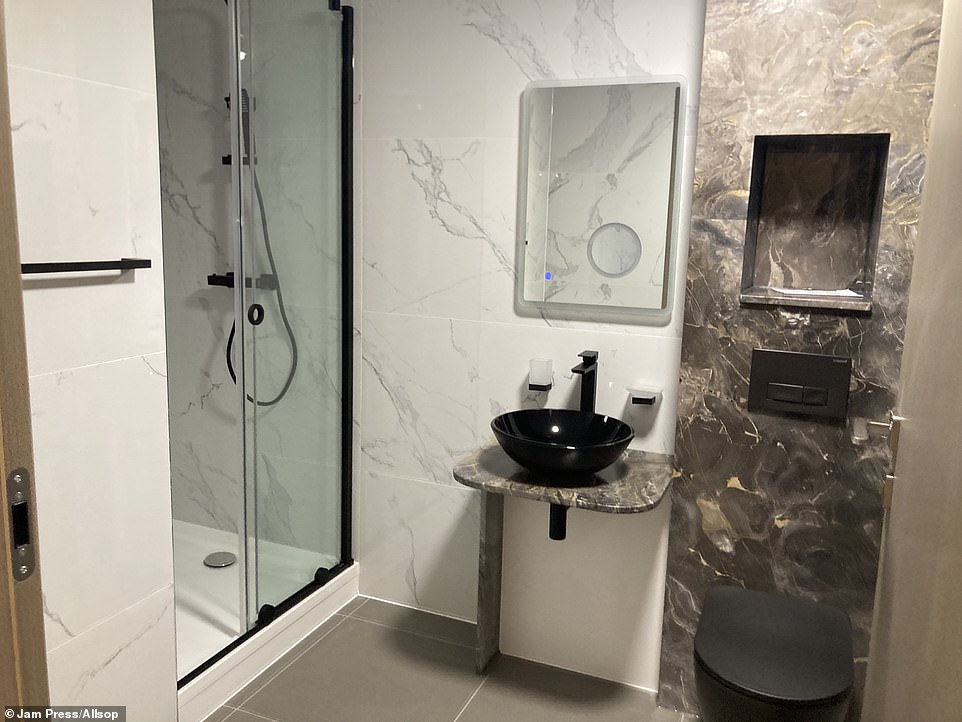 There are three flats being auctioned together. All the bathrooms are tiled and finished with marble, pictured. All flats also have underfloor heating 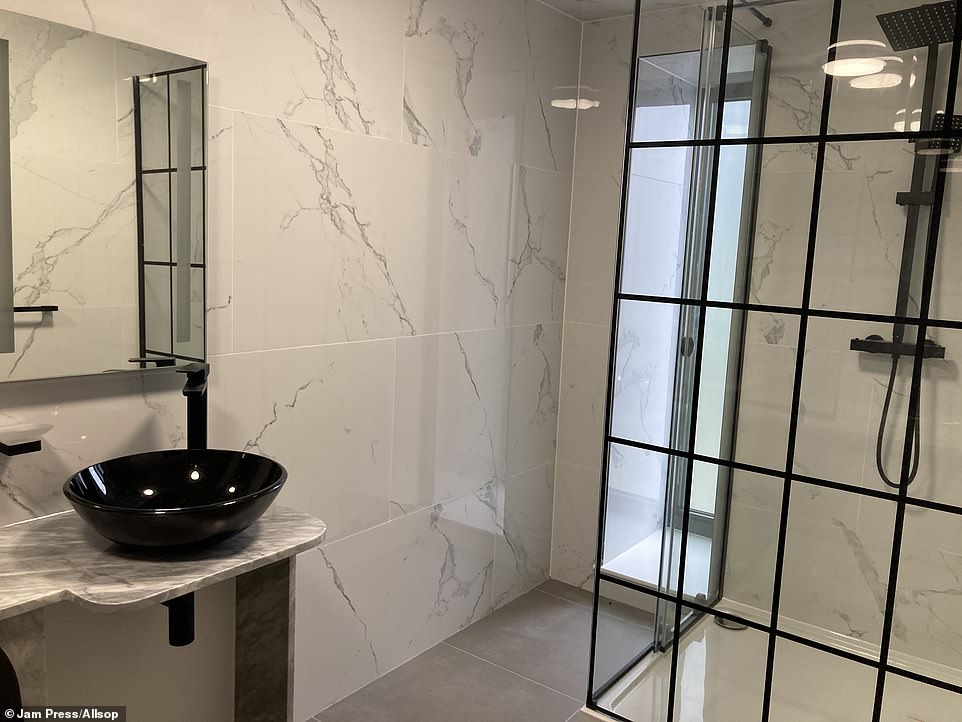 In spite of being a former bunker, the building, which boasts 600mm-thick reinforced concrete walls, welcomes plenty of light (pictured: one of the bathroom)

The council threw out the proposals and called them ‘alien’ and an ‘unnecessary eyesore’ and the owner of the lot appealed the decision, eventually gaining planning permission.

The properties were originally listed individually by estate agent Savills this summer, with prices starting at £550,000, but are now being sold together at auction. 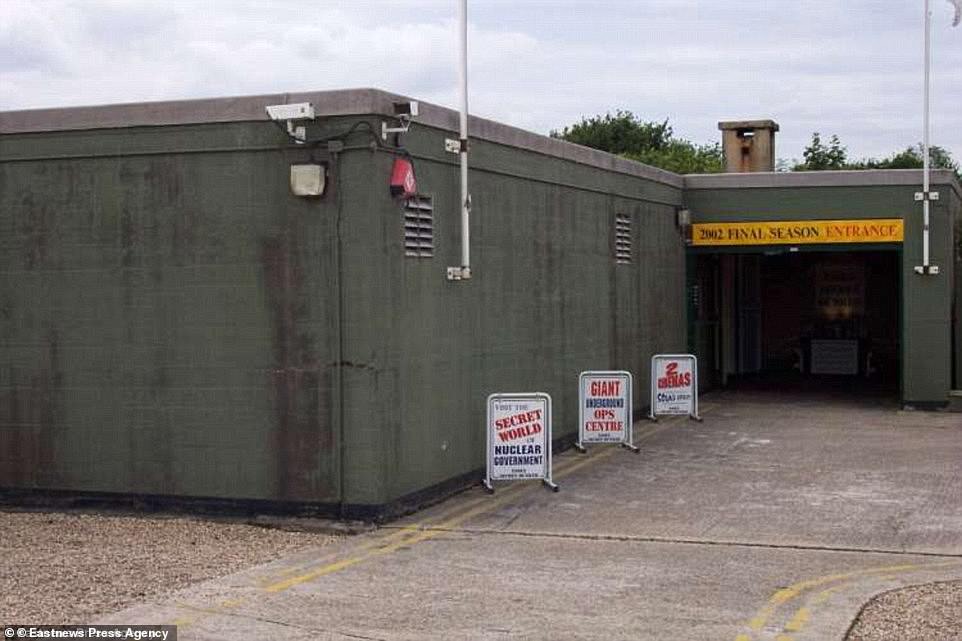 Pictured: the museum during its final season before it closed in 2002. In 1963, it was purchased by Essex County Council from the War Office at a cost of £5,250 and became their emergency headquarters in the event of a nuclear war 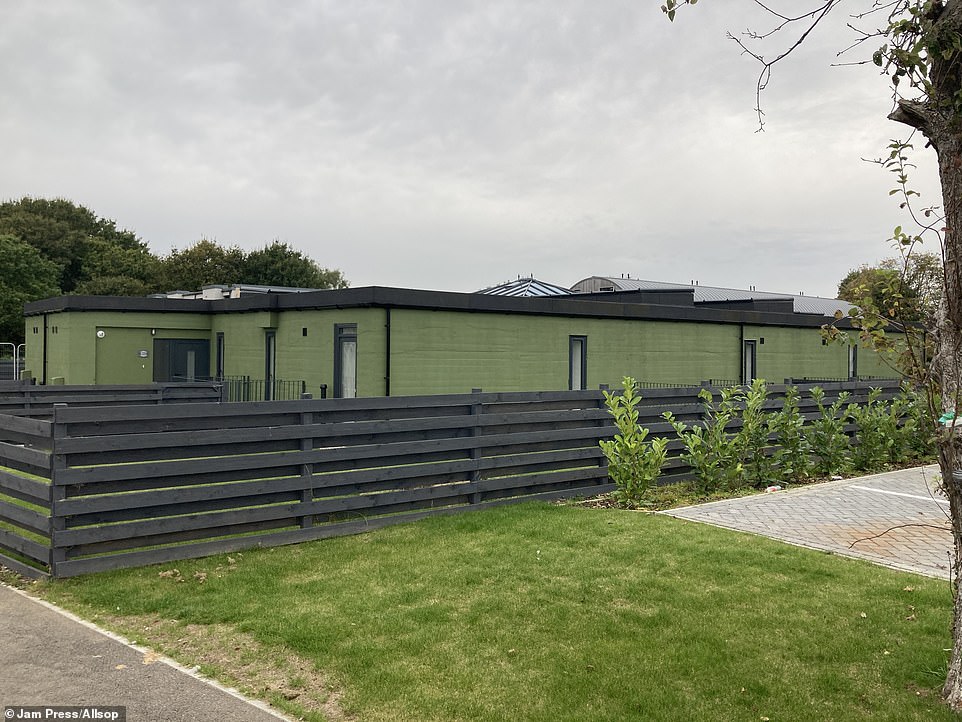 Outside, the green bunker, located in rural Essex, has its own parking space and enclosed garden space for each flat. So would you bid on it?