Home » Lifestyle » Puppy love: how Jeff Koons’ famous sculpture could have been ours Puppy love: how Jeff Koons’ famous sculpture could have been ours

If John Kaldor has one regret across 50 years of bringing art to the Australian great outdoors it is that he didn't do more to keep Jeff Koons' Puppy.

What Kaldor describes as the happiest of his 34 public artworks, Puppy in 1995 had stood 12.4 metres high on the harbourside, at the door of the Museum of Contemporary Art, carpeted in flowering blooms like a mammoth topiary. 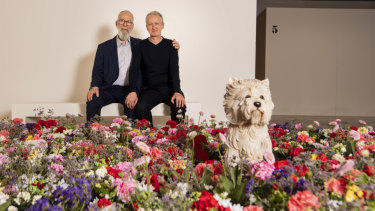 The ever-changing sculpture, project number 10, is now on permanent display at the Guggenheim Bilbao but it might have stayed in Sydney or even gone to Melbourne for a relatively cheap $1 million.

"It was election time at that time and Jeff Kennett lost," Kaldor said yesterday at the launch of a unique tribute to his ground-breaking public art organisation which began in 1969 with artists Christo and Jeanne Claude's monumental wrapping of Little Bay.

"He was interested in it and it just didn't happen," Kaldor said. "But it would have been a wonderful item for our city, as it is for Bilbao."

British artist Michael Landy, who presented project number 24 Acts of Kindness in Martin Place, has sifted through the archives, documents and remnant materials for each of the 34 projects to present an unconventional retrospective that also stands as Kaldor's 35th project.

With none of the original works on hand, Landy distilled the essence of each project into enlarged archive boxes, some of which are reconstructions of the project, others reimaginations, for the Art Gallery of NSW.

"It's partly an intellectual exercise but it also about the materiality of these large projects," Landy said.

Most recognisable is Puppy which features Koons' model of a West Highland Terrier set in a field of flowers while Landy has scattered some of the bleached white shields that comprised Wiradjuri/Kamilaroi artist Jonathan Jones' vast sculptural installation at the Royal Botanic Garden in 2016. 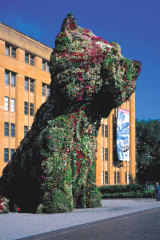 New works have been commissioned from Alicia Frankovich, Agatha Gothe-Snape, Ian Milliss and Imants Tillers. Milliss and Tillers had helped on the inaugural Kaldor project Wrapped Coast – One Million Square Feet at Little Bay and their paintings reflect on this experience, Tillers crediting it for inspiring him to give up architecture and become an artist

More broadly, Kaldor said the public art projects had challenged the narrowcasting of art as that which is only fitting to hang on the walls of a gallery. He also admitted that rumours horticultural students assembling Puppy had included a marijuana plant among the foliage were true. The prank was discovered and Koons was mortified, ordering it be removed because he regarded Puppy as a pure expression of innocence.

"What I enjoy about the temporary projects is that people encountering them don't have any preconceived ideas and that gives us a great advantage because they have a more open mind to accept something that is different, that is strange," Kaldor said.

'Teen Mom 2': Kailyn Lowry Says The Producers Lied To Get In The Room When She Was Giving Birth To Isaac
Recent Posts