The Duke of Sussex, 38, surprised onlookers with the trip to the USS Arizona Memorial in Honolulu last month. He cut a relaxed figure with an unbuttoned top collar and a casual blue suit, with a poppy pinned to his lapel.

The royal, who was without his wife Meghan Markle, 41, and their children Archie and Lilibet, spent time talking to the families who were also visiting the memorial on that day.

He has now shared official photographs from the visit on his Archewell site, with a description detailing how it was part of ‘the Duke’s continued commitment to remembering and honoring military personnel, veterans and families.’ 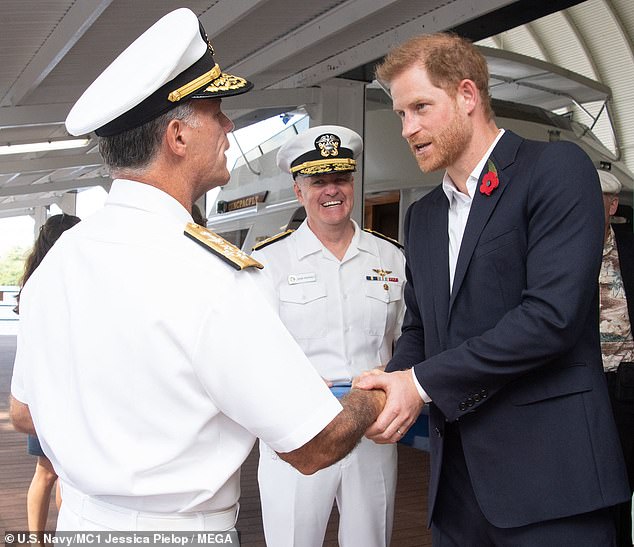 The description continues: ‘In November, ahead of the 81st commemoration of Pearl Harbor Day, The Duke of Sussex visited Pearl Harbor National Memorial in Honolulu – a monument honoring the thousands of servicemembers and civilians affected by the tragedy.

‘As part of The Duke’s continued commitment to remembering and honoring military personnel, veterans and families, he toured the sites of the USS Missouri and the USS Arizona alongside Admiral Samuel Paparo (Commander, U.S. Pacific Fleet) and Admiral John Aquilino (Commander, U.S Indo Pacific Command), paying his respects with a ceremonial laying of flowers at the reflection pool.’

In the photographs, the Duke can be seen saluting U.S. Navy servicemen, and posing for snaps with their families.

Harry served in the military for a decade and had two tours of Afghanistan. He has also organised the Invictus Games for wounded and injured service members and veterans since 2014. 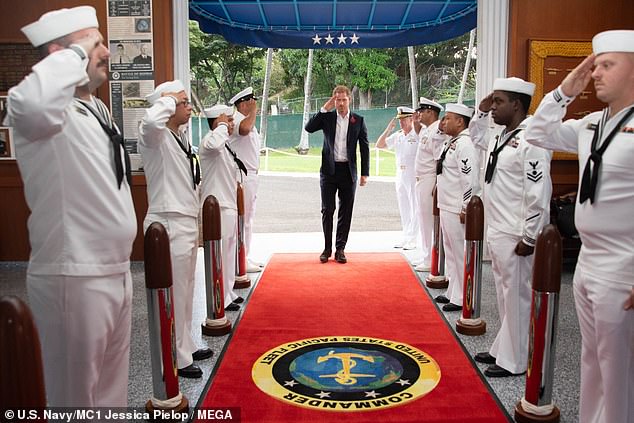 In one of the photographs, the royal can be seen receiving the salute from different US navy servicemen 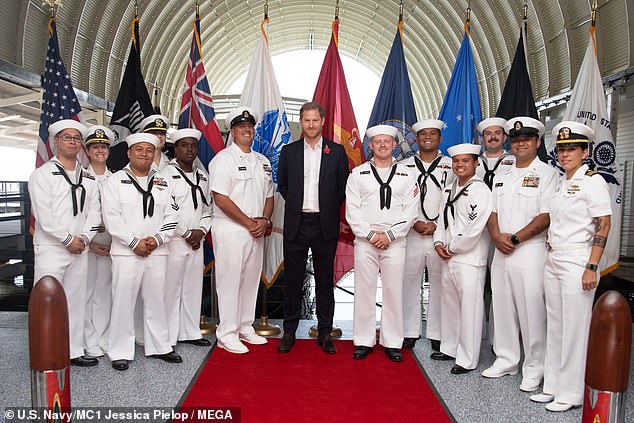 The Duke of Sussex, 38, surprised onlookers with the trip to the USS Arizona Memorial in Honolulu last month

On December 7, 1941, Japan launched more than 350 fighters, bombers, and torpedo planes against the US naval base in Hawaii, plunging America into World War II.

The Japanese assault began around 8am, resulting in the deaths of thousands of Americans, numerous injuries, and the sinking of four battleships, and damage to another four.

Hundreds of Marines and sailors went down with their ships, others were burned beyond recognition in explosions and fires.

The USS Arizona tragically lost 1,177 crewmen out of 1,512 who perished while on the ship during the attack.

Navy fighter planes were blown up without the chance to take off and hangars were set ablaze during the surprise assault.

Almost none were ready to take off to defend the base when the attack started, and just eight managed to get airborne during the attack.

The attack was part of a campaign of Pacific expansion undertaken by Imperial Japan that was intent on carving out an Asian empire to rival those of Europe.

Overall, 2,403 Americans were killed on that day in just 90 minutes.

Of the tens of thousands of servicemen who survived, between 2,000 to 2,500 survivors are thought to be still alive.

He is no longer permitted to wear military dress, however, after being stripped of the right when he left the Royal Family, but is still permitted to wear the medals he earned – although he wasn’t wearing them for this outing.

Since quitting royal duties in January 2020, Prince Harry has been left to mark Remembrance Day independently.

In 2020, the couple who are now based in California following Megxit, ‘personally recognised’ Remembrance Day by visiting the Los Angeles National cemetery to pay their respects to fallen Commonwealth soldiers, while last year they made a surprise visit to a New Jersey military base.

But the pair came under fire for arranging for a photographer to capture their personal act of Remembrance in 2020, being criticised for enlisting Lee Morgan to release pictures from the moment.

At the time, Harry was said to be upset that he’d been refused permission for a wreath to be laid at the Cenotaph on his behalf because he was no longer a working royal.

To mark this year’s occasion, Harry and Meghan also shared a photograph showing them in front of military personnel for Veterans Day and Remembrance Day.

In a statement posted to their Archewell Foundation website, the Duke and Duchess of Sussex said: ‘We honour servicemembers across the world. These brave men and women, as well as their families, have made tremendous sacrifices and embody duty and service.’

The statement continued: ‘We are proud to work with so many organizations that support veterans and military families, including: The Invictus Games Foundation, The Mission Continues, Team Rubicon, Scotty’s Little Soldiers and The Greatest GENERATIONS Foundation. Today and every day, thank you for your service.’

The image shared this year, taken by their wedding photographer Chris Allerton, appears to have been captured at The Hague in April during the Invictus Games.

Meanwhile Harry also sent a highly personal letter to bereaved children of members of the British Armed Forces claiming they share a bond due to having lost a parent.

In a note to members of Scotty’s Little Soldiers, a charity for bereaved British Forces children and young people, the Duke of Sussex said they are all in his ‘thoughts and heart’ on Remembrance Sunday and reminded them: ‘You are not alone.’

Harry said one of the ways he has personally learned to cope has been ‘through community and talking about my grief’. 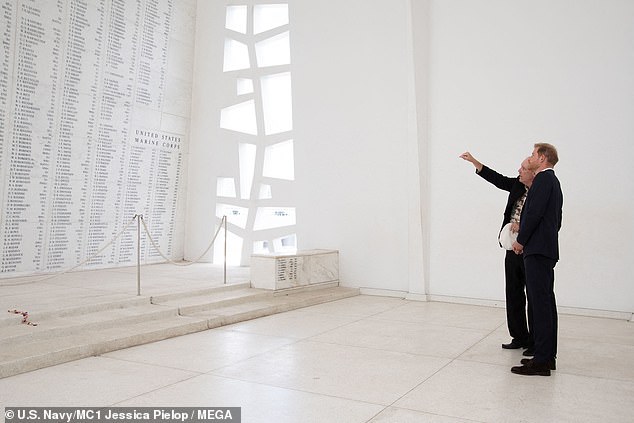 Harry, who served in the military for a decade and had two tours of Afghanistan, took part in the visit as part of his ‘continued commitment to remembering and honoring military personnel, veterans and families’ 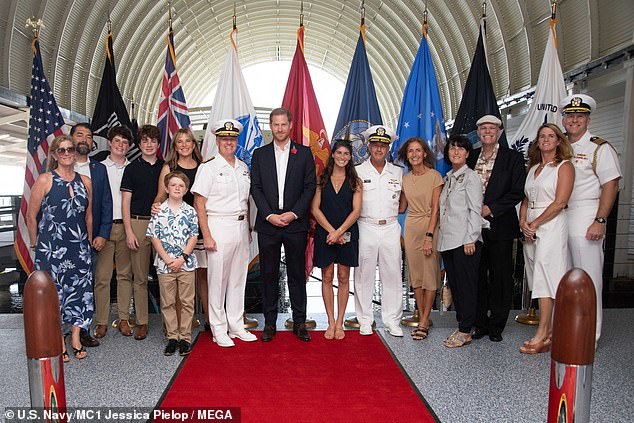 The release of his latest photographs comes as the Duke faces a fresh wave of backlash after sensationally claiming lies were told ‘to protect’ his brother William – in a move royal experts said would leave his late mother Princess Diana ‘appalled at his disloyalty’.

Harry’s latest bitter broadside against the Royal Family came in a new trailer of his and his wife, Meghan’s, incendiary Netflix tell-all.

And it sparked a vicious response on Monday evening, with one royal expert, Tom Bower saying Harry’s ‘treacherous collaboration’ with the streaming giant had ‘destroyed his relationship with William’, as insiders dismiss jibes from the Sussexes that they were victims of ‘institutional gaslighting’.

Mr Bower, who has authored multiple books about the royals, also rubbished suggestions the Duke and Duchess had their security withdrawn before Megxit, calling it ‘shockingly untrue’.

And another royal author, Richard Fitzwilliams, has questioned whether the couple’s claims about security had been ‘sensationalised’ by Netflix to draw in viewers.

Prince Harry has ‘absolutely NO regrets’ and is ‘DELIGHTED’ with his incendiary Netflix series that branded Britain ‘racist’, ‘mocked’ The Queen and contained multiple barbs at his brother William

‘They were happy to lie to protect my brother’: Harry and Meghan fire new attacks at William and the Royal Family in explosive trailer for Netflix series as they say they were victims of ‘institutional gaslighting’