The Happy Prince! Charles cracks a joke as he awards medals to Gurkha soldiers – who struggle to stay solemn during the ceremony

While military presentations may not seem the natural place to share a giggle, it seems Prince Charles couldn’t help but crack a joke while honoring Gurkha soldiers today.

Prince Charles, 70, was in great spirits as he joined the first battalion the Royal Gurkha Rifles in Kent for their 25th anniversary.

He beamed as he awarded medals to soldiers for their recent deployment to  Afghanistan at the Sir John Moore Barrack’s in Shorncliffe Folkstone.

And whilst many stayed solemn, one shared a joke with the royal, while others around him desperately trying to stifle laughter and maintain a solemn exterior. 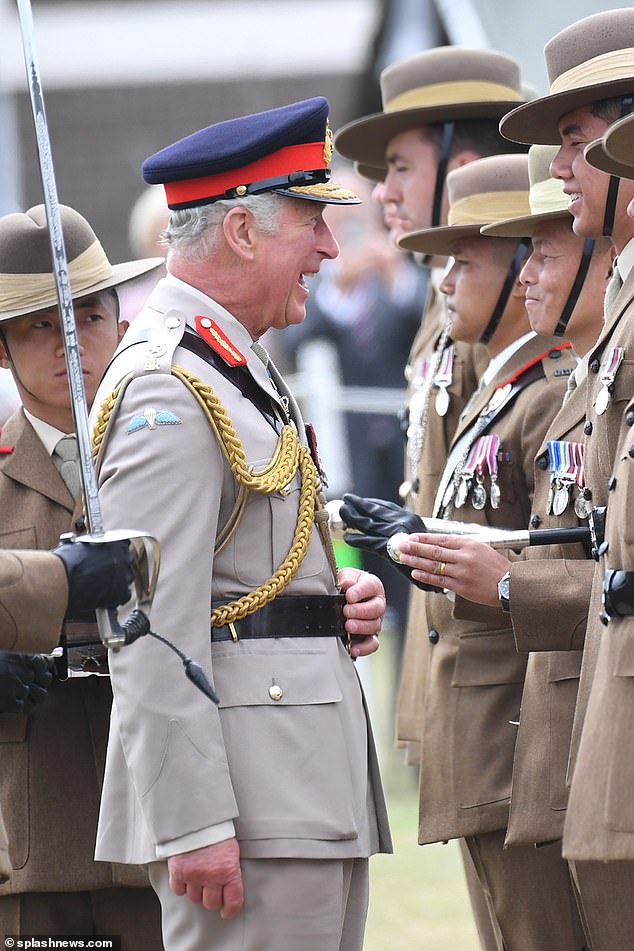 Prince Charles, 70, joined the st Battalion The Royal Gurkha Rifles for their 25th anniversary celebrations, and couldn’t help but crack a smile with one of the soldiers 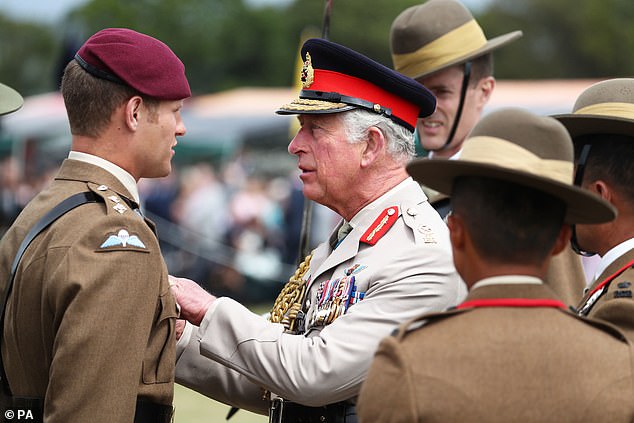 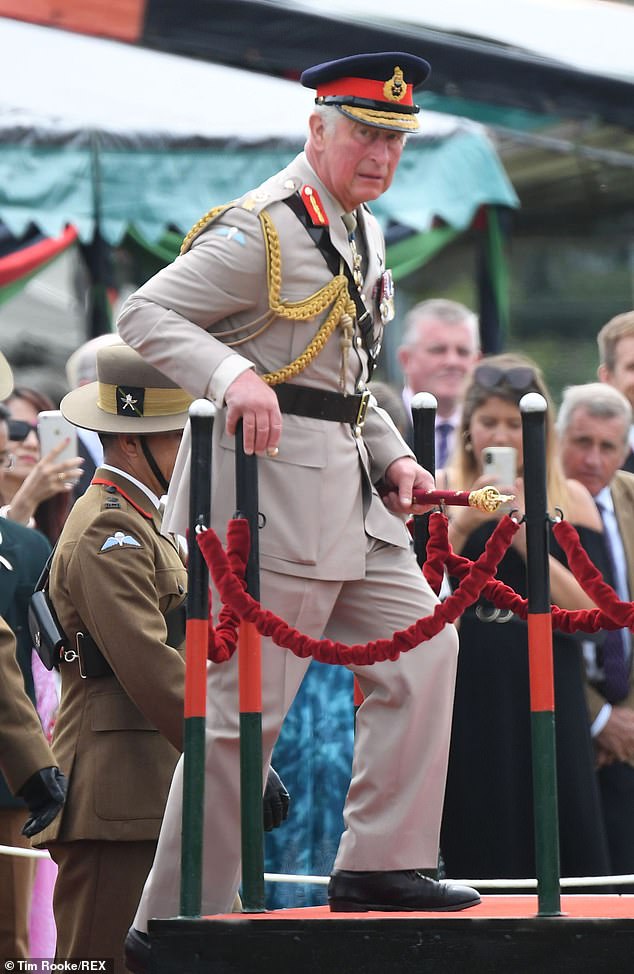 Prince Charles has a long history with the Gurkhas, having been Colonel-in-Chief of the Royal Gurkha Rifles since 1977.

Crowds gathered to snap a photograph of the royal, who looked smart in military dress as he made the appearance on the base. 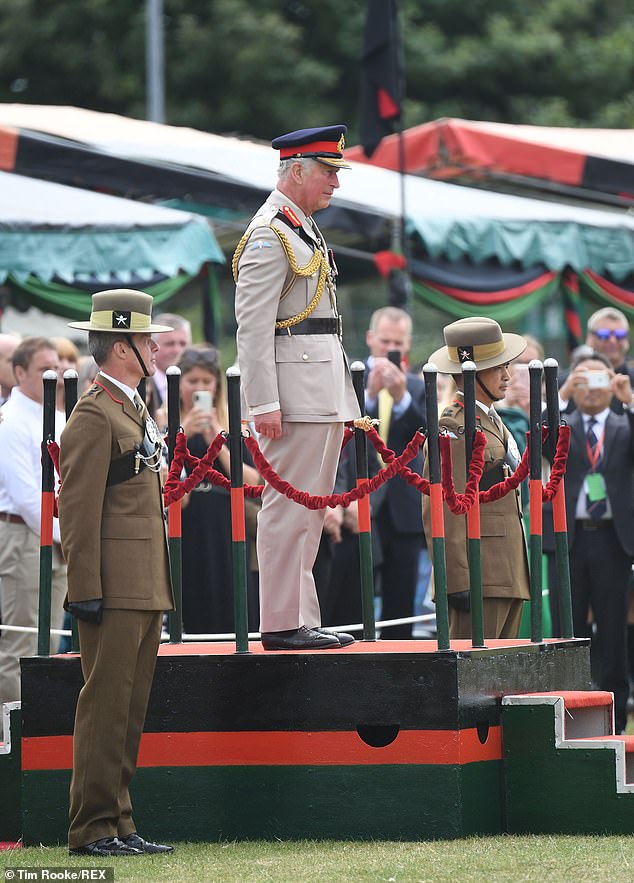 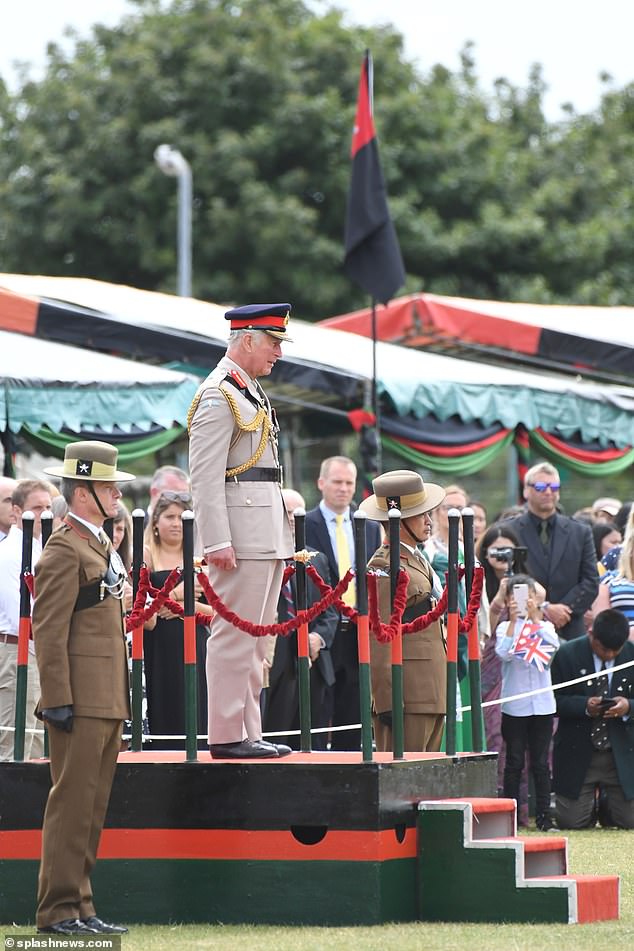 The royal was made Colonel-in-Chief in 1977, and regularly attends events honouring the soldiers 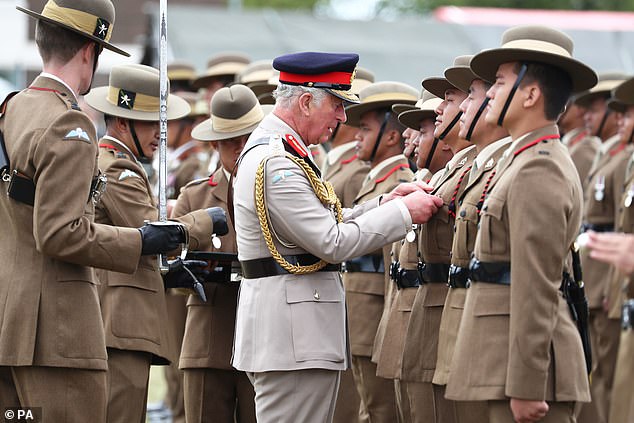 The royal handed out medals to lines of soldiers, who appeared honoured to meet with the Colonel-in-Chief

The soldiers have all recently returned from a seven-month tour of Kabul on Operation TORAL – the UK’s contribution to the NATO mission in Afghanistan.

The royal beamed as he presented lines of servicemen with the medals, and while many appeared to maintain a serious expression, one couldn’t help but return the royal’s smile.

Prince Charles appeared to share a joke with the soldier, while those around him stifled a laugh.

The royal went on to be honoured with a Mala, a large red, green and black flower garland, at the event before meeting soldiers and their families. 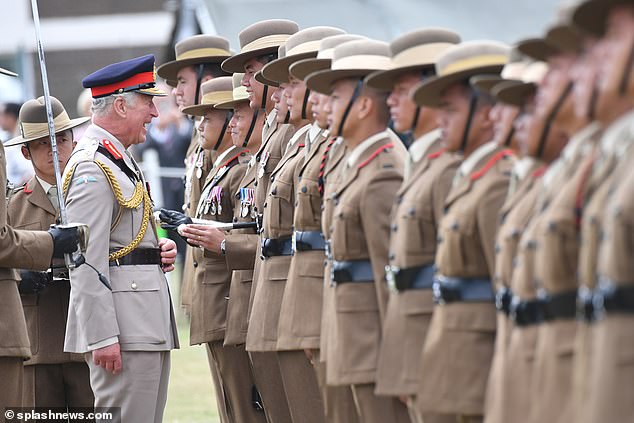 Meanwhile it appeared the royal couldn’t help but share a joke with one of the soldiers, whose stoney expression broke out into a smile 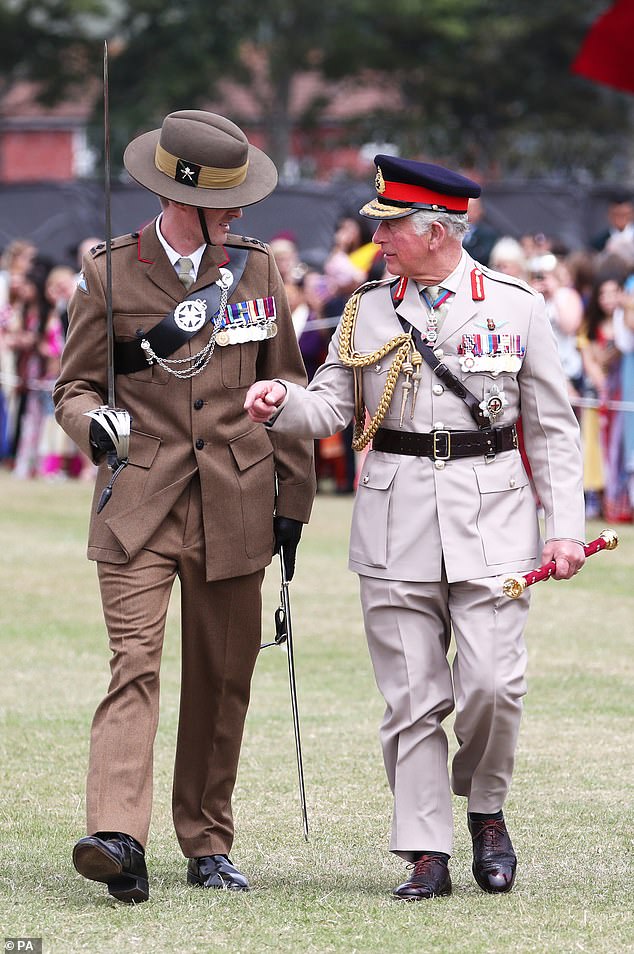 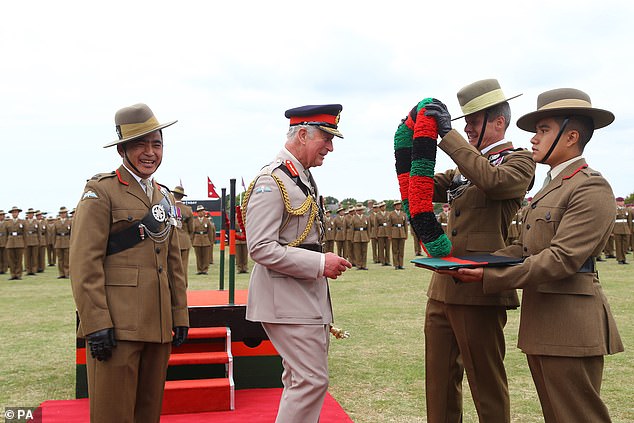 For two centuries, Gurkha soldiers have served alongside British forces in every major conflict, gaining a reputation for bravery and loyalty.

During the two world wars there were more than 40,000 Gurkha casualties, and 13 Victoria Crosses have been awarded to Nepalese Gurkha soldiers.

Charles’s links to the Royal Gurkha Rifles dates back to 1977 when he became Colonel-in-Chief of the 2nd King Edward VII’s Own Gurkha Rifles (The Sirmoor Rifles). 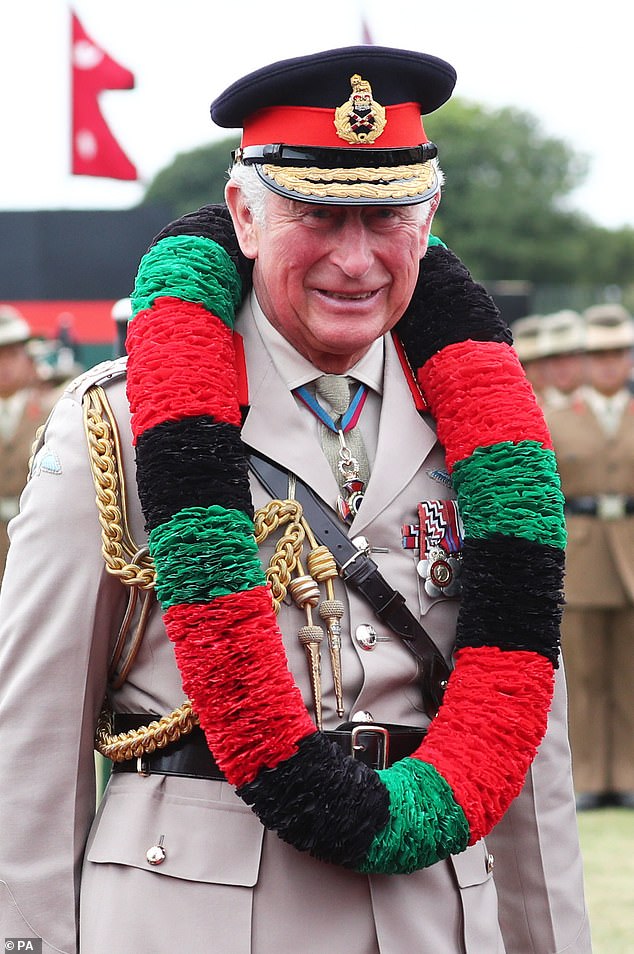 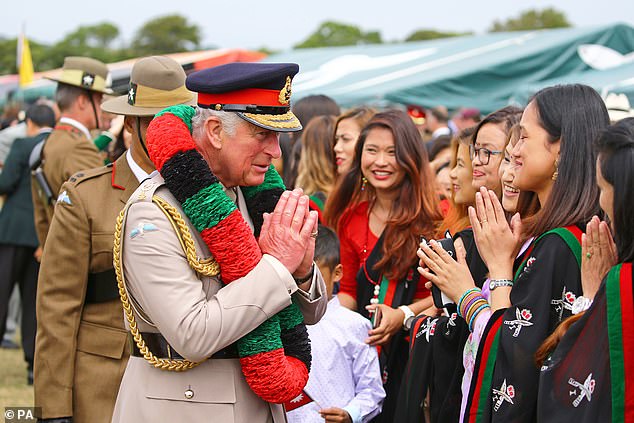 The royal went on to meet with family members during his visit, with many wearing the battalion’s colours of red green and black 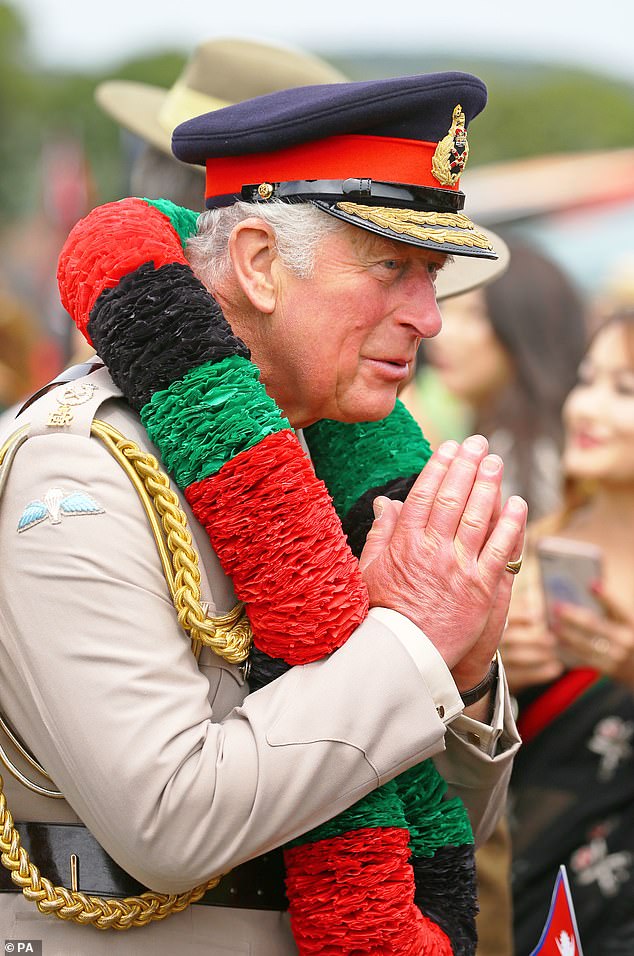 Royal connections with the regiment began 101 years earlier in 1876 when the then Prince of Wales was the first colonel-in-chief.

It’s been a busy month for the royal, having spent the last week in Wales celebrating the 50th anniversary of his investiture as the Prince of Wales.

He appeared to return to England at the weekend, where he attended his grandson Archie’s christening at Windsor Castle. 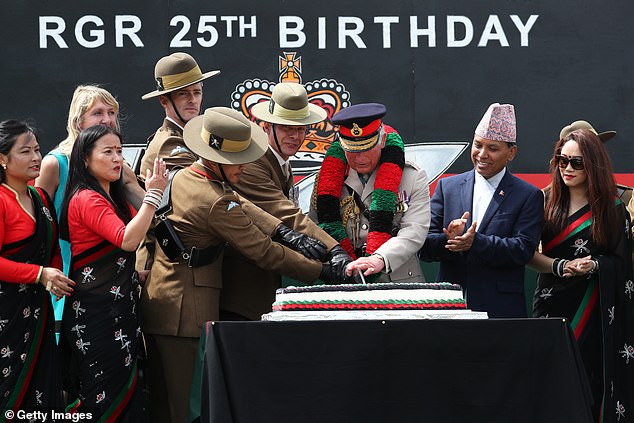 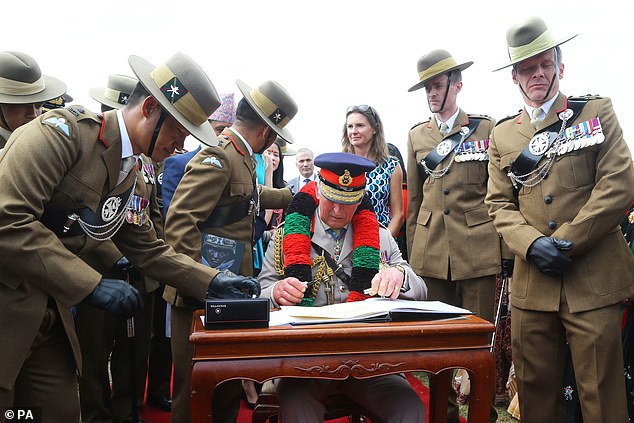 THE HISTORY OF THE GURKHAS: FEARSOME WARRIORS WHOSE LOYALTY TO BRITAIN HAS NEVER WAVERED

‘Better to die than be a coward’ is the motto of the fearsome Nepalese Gurkha soldiers.

They were first recruited by Britain in 1815 to ensure that they did not fight for Nepal, with which the British East India Company was then at war.

A hasty peace deal had just been signed after the Company suffered heavy casualties during the invasion of Nepal. This allowed it to recruit from the ranks of the former enemy.

When the East India Company’s forces mutinied in 1857 the loyalty of the Gurkhas made them central to British rule. They policed India’s northern hills with their tactical skills and were expected to continue serving for India when the country secured its independence in 1947.

It made religious sense because Nepal was officially Hindu and would also have allowed Nepalis to easily return home on leave.

However, following the partition of India, an agreement between Nepal, India and Britain meant four Gurkha regiments from the Indian army were transferred to the British Army, eventually becoming the Gurkha Brigade.

The name ‘Gurkha’ comes from the hill town of Gorkha from which the Nepalese kingdom had expanded.

The brigade has always been dominated by four ethnic groups – the Gurungs and Magars from central Nepal, the Rais from the north-east and Limbus from the east. The latter live in villages of impoverished hill farmers.

Over the past 50 years they have served in Malaysia and Borneo – from 1948 to 1967 – Cyprus, the Falklands, Kosovo and Hong Kong and more recently in Iraq and Afghanistan.

They have received 13 Victoria Crosses between them during their years of service.

The Gurkhas serve in a variety of roles, mainly in the infantry but also as engineers, logisticians and signals specialists.

The Gurkhas are now based at Shorncliffe near Folkestone, Kent, with soldiers still selected from young men living in the hills of Nepal.

Around 28,000 enter into the selection procedure for just over 200 places each year.

Emmerdale spoilers: Liam Cavanagh reveals truth about his past as Bernice finds evidence?

Why Do I Overthink Everything I Say? Experts Reveal What’s Really Going On In Your Mind
Recent Posts