Premier Daniel Andrews cancelled a press conference due to safety fears after a small group of protesters picketed the opening of Bendigo TAFE on Wednesday, amid growing concerns about abuse directed at Victorian MPs.

The Premier toured the education campus as part of its opening but abandoned plans to take questions from regional reporters when protesters arrived. Brandishing posters with mottos including “kill the Bill” and “coercion is not consent”, the activists were opposed to the state’s proposed new pandemic laws and vaccine mandates.

Victoria Police confirmed officers responded to a small group of people as they “conducted a peaceful protest around 10.20am”.

“The protest concluded without incident and the area is now clear,” a police spokesman said.

News of the cancelled event followed daily rallies in Melbourne’s CBD. On Monday night, COVID-19 response commander Jeroen Weimar and Chief Health Officer Brett Sutton were escorted through a crowd of protesters who were corralled on the steps of the Victorian Parliament.

Shadow Treasurer David Davis and Liberal Democrat David Limbrick joined the protesters on Tuesday night, when hundreds of people marched through the CBD. 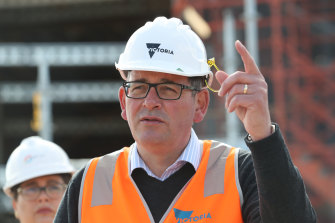 The proposed new laws have been heavily criticised by the state opposition and the Victorian Bar for being too broad and lacking proper scrutiny. However, the passed the Legislative Assembly last month and now require the support of three crossbench MPs in the Legislative Council.

The proposed laws would replace existing state of emergency powers, empowering the premier and health minister of the day to declare pandemics and enforce health directions. Under the current system, the state’s chief health officer, who is not an elected official, has these powers.

Crossbench MPs, in particular Reason Party leader Fiona Patten and Andy Meddick, of the Animal Justice Party, have been increasingly targeted by vandals and in online abuse because they have indicated support for the bill. 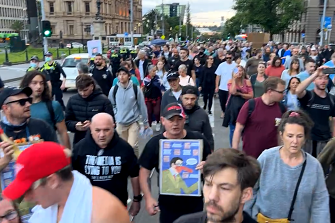 Hundreds protest in Melbourne against vaccine mandates and pandemic legislation.Credit:RealRukshan/Facebook

The Department of Parliamentary Services, in its 2020-21 annual report tabled last month, said MPs and their staff were frequently targeted by protest activity, and security incidents were growing significantly.

On Tuesday, the Victorian Bar published its formal submission to the legislation after publicly lashing the government for the proposed legislation and its prolonged use of the powers.

“While broad emergency powers that circumscribe ordinary checks and balances of our democracy may be justified to deal with an unforeseen crisis in the short term, they are not appropriate for the management of risks over extended periods,” the Bar said in its formal response.

The Premier’s office declined to comment. Bendigo TAFE was contacted.

Stay across the most crucial developments related to the pandemic with the Coronavirus Update. Sign up for the weekly newsletter.