All good things must come to an end. Pete Davidson has confirmed he is leaving Saturday Night Live after eight seasons, and the season 47 finale on Saturday, May 21, will be his final episode.

The King of Staten Island star, 28, used SNL writer Dave Sirus‘ Instagram to share a video of Jerrod Carmichael hugging him after he made his debut on the NBC show in 2014. Alongside the 10-second clip, Davidson also shared an emotional message about his exit hours before his final episode on Saturday, May 21.

“This video was taken 8 years ago. Jerrod sent it to me last night and it made me super emotional in the best way. In the video, I had just gotten back from doing my very first update and sketch,” he wrote in the lengthy goodbye. “It’s crazy to think that today I’ll be doing my last one.”

There had been much speculation that Davidson would leave Saturday Night Live, and several reports indicated that the Suicide Squad star would sign off at Studio 8H for the last time this weekend alongside host Natasha Lyonne and musical guest Japanese Breakfast. The May 21 note was the first time he confirmed his departure. 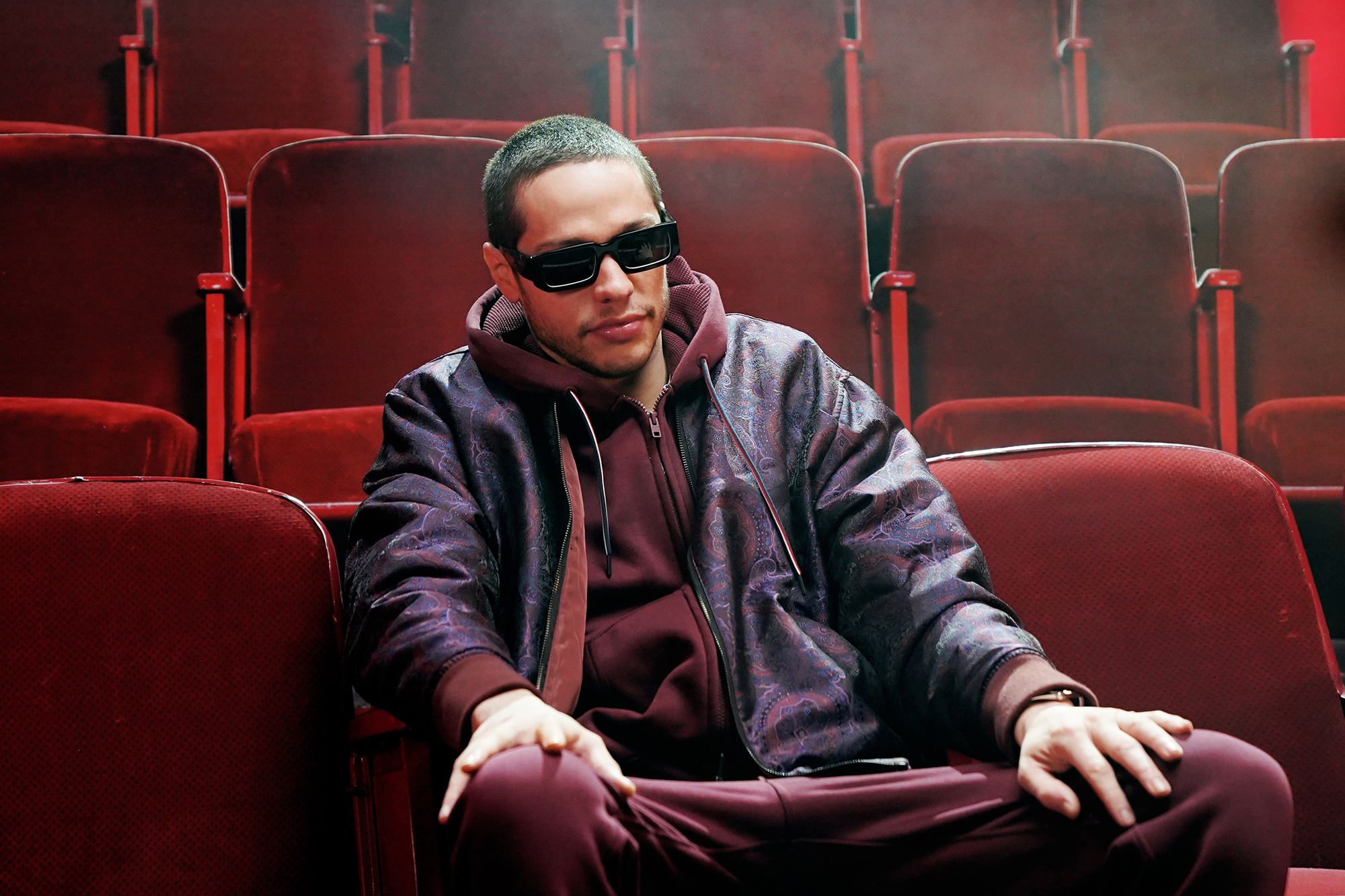 Davidson continued in his statement, reflecting on his legacy as the show’s youngest ever cast member: “When I got the show I was 20 years old and I had no idea what I was doing. I still don’t but especially back then. I wasn’t really a sketch performer, I was just a stand up. I knew I could never keep up or go toe-to-toe with a Kenan Thompson or a Kate McKinnon, so I was super scared at figuring out what I could possibly bring to or do for such a historic, respected show and platform. I figured since I’m a stand up, I’ll just try my stand up and personal bits on Weekend Update as myself and I’m so glad I did. I got to share so much with this audience and literally grow up in front of your eyes. We were together through the good and the bad, the happiest and the darkest of times.”

The performer, who started dating Kim Kardashian last fall after she hosted an episode, shared his gratitude to the SNL cast and crew. The show has worked around his movie schedule, most recently allowing him to be absent for much of the second half of season 47 while he filmed the upcoming thriller The Home.

“I owe Lorne Michaels and everyone at SNL my life,” the Staten Island native emphasized. “I’m so grateful and I wouldn’t be here without them. I appreciate you guys always having my back and sticking up for me even when that wasn’t the popular opinion. Thank you for always believing in me and sticking by my side even when it seemed comical. Thank you for teaching me life values, how to grow up and for giving me memories that will last a lifetime.”

Davidson concluded, “SNL is my home. I’m so happy and sad about tonight’s show. For so many reasons I can’t explain.”

However, he also assured fans that he’ll be back, adding, “Can’t wait to be back next year in a [John] Mulaney musical number.”

He signed the note “Resident young person Pete Davidson,” a reference to how he was frequently introduced on Weekend Update.

While there was speculation that Davidson would forego the finale to attend Kourtney Kardashian and Travis Barker’s Italy wedding with girlfriend Kim, a source confirmed to Us Weekly Friday, May 20, that the Good Mourning actor “would be on” the episode, which will also be his last as a full-time cast member.

His exit has been expected for quite a while. Following an unusually heartfelt goodbye during SNL’s season 46 finale in May 2021, fans began to speculate about whether Davidson was ready to move on from the show.

“It was an emotional week,” the comedic actor told Gold Derby in June 2021 when asked about his performance. “Speaking for myself, I don’t know what the plan is. Everything’s kind of up in the air right now just depending on scheduling,” he said, noting that it was his “seventh year” and that’s “usually what the [SNL] contract is for.”

The New York native added: “[The finale] was really emotional. I worked with these guys for a fourth of my life. … I started there with acne and left with tattoos. It was just like a crazy, long period of time, and [I] wasn’t ready for the season to end yet because I was really having so much fun.”

According to the comedian, his potential farewell wasn’t the only reason for his heightened reaction — seeing a full audience for the first time since COVID-19 made him extra emotional as well.

“Just hearing that laugh, like the full room laugh … it made me very emotional to be able to perform in front of a full crowd again,” he said. “It was just a crazy night.”

Everything the ‘SNL’ Cast Has Said About Pete Davidson, Kanye West’s Feud

Just a month prior, the comedian told the Hollywood Reporter in May 2021 that “he was ready to hang up his jersey” and move on with his career, but ultimately returned for the show’s 47th season, which premiered in October 2021.

That same month, Davidson worked alongside Kardashian, 41, even sharing a kiss with the reality star during her time as a host. The two sparked a romance shortly after, with a source telling Us in November 2021 that the KKW Beauty founder was “falling for” Davidson.

After making their red carpet debut at the White House Correspondent’s dinner in April, an insider revealed to Us that the duo were more blissful than ever making a public appearance.

“Kim and Pete are even happier now that they can attend events together and be in public,” the source confirmed at the time. “They love spending as much time together as possible.”

Kylie Jenner enjoys a day out in Portofino with daughter Stormi