People reveal the strangest reasons they were fired in hashtag trend

‘Told the boss not to call me “dude”‘: People reveal the strangest reasons they were FIRED as part of a hilarious hashtag trend – so who do YOU think is the worst offender?

People are taking to Twitter to share the bizarre things that ended up getting them fired from their jobs as part of a viral hashtag trend.

Back in November 2019, the @HashtagRoundup Twitter account asked followers to reveal something they did while on the clock that resulted in them getting sacked, using the hashtag #AndThenIWasFired.

The responses were not only hilarious, but nearly a year later, they are still coming in as people continue to use the hashtag to share their work stories, which range from the unjustified to the downright silly. 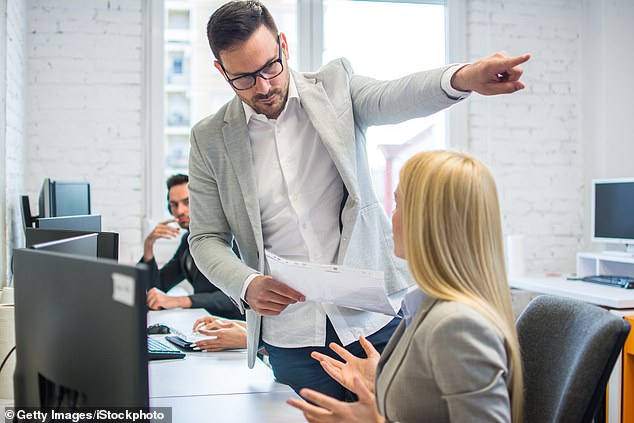 Story time: Twitter users are sharing the strange reasons they have gotten fired from their jobs as part of a viral hashtag trend (stock image)

Beginning: Back in November 2019, the @HashtagRoundup Twitter account asked followers to reveal something they did that got them canned, using the hashtag #AndThenIWasFired

In tweets that were shared this week, two different McDonald’s employees opened up about how they ended up getting fired from the fast-food chain.

‘Actually popped a pickle in my mouth at McDonald’s right on the prep line….and right when the regional VP was walking by. #AndThenIWasFired,’ one person recalled.

Another shared: ‘I refused to tell the hot college guys who came in to McDonald’s that “I have the cure for your Big Mac attack” #AndThenIWasFired.’

Food was involved in a lot of the stories, with one Twitter user admitting: ‘I took a picture of me eating the duty manager’s leftover pizza and posted it on Twitter. #AndThenIWasFired.’

One woman revealed how acting like her boss ended up getting her canned.

‘I dared use the same excuse a manager used every time she was late or didn’t show up. #AndThenIWasFired,’ she explained.

‘Told the boss NOT to call me “Dude” #AndThenIWasFired,’ someone else shared.

The stories that people shared in November were just as funny, with one woman claiming she was fired over her smelly lunch.

‘I cooked fish in the microwave #AndThenIWasFired,’ she wrote.

Another admitted that hooking up with her boyfriend while on the clock led to her being let go from her job.

‘Jumped up on the counter and had a super hot makeout sesh with my BF during an extremely dead night shift at the Holiday gas station,’ she recalled. ‘The next day, whaddya know, the district manager came in to review the security tapes, #AndThenIWasFired.’

One woman said jealous was at play when she was canned from her childcare gig, explaining: ‘I was on vacation with a family I nannied for. The kid wanted to play with me instead of his mom… #AndThenIWasFired.’

Others shared photos of the ridiculous things they did to get fired. 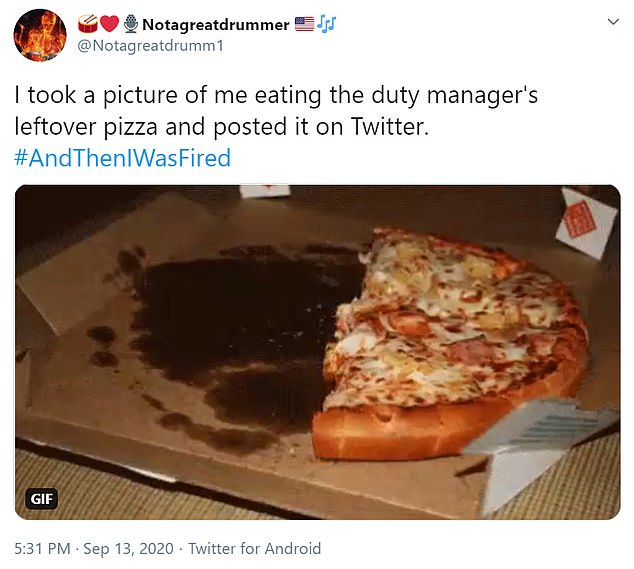 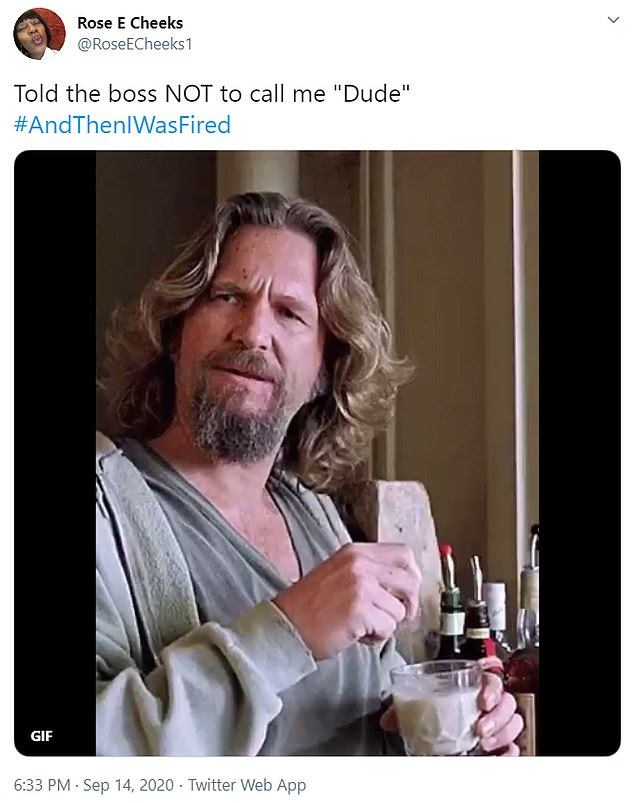 Never gets old: Nearly a year later, people are still using the hashtag to share their hilarious stories on Twitter

‘When your wax your bosses drink…#AndThenIWasFired,’ one Twitter user wrote, sharing photos of the red wax from a wheel of cheese that he used to cover his employer’s cup.

‘I wrapped my bosses office in tin foil. #AndthenIwasFired,’ another explained, posting an image of a cubicle covered in tinfoil, including the chair and computers.

And some admitted that their complete disregard for their job, coworkers, and boss ultimately ended up getting them fired.

‘I was told I could bring in additional office supplies from home, so I brought in a pillow and blanket… #AndThenIWasFired,’ one person shared.

‘I told my boss that he has the IQ of a loaf of bread… #AndThenIWasFired,’ another commented.

Someone else tweeted: ‘I very calmly and politely told an annoying co-worker to please shut the f’ up so I could do my job #AndThenIWasFired.’