Home » Lifestyle » Overlooked No More: Else Ury’s Stories Survived World War II. She Did Not. Overlooked No More: Else Ury’s Stories Survived World War II. She Did Not.

Overlooked is a series of obituaries about remarkable people whose deaths, beginning in 1851, went unreported in The Times.

BERLIN — What stood out was the thick, white “U” of her last name, which had been carefully painted on a suitcase that was loaded, along with the belongings of 1,190 other Jews, onto a train in January 1943. The destination was Auschwitz.

The brown leather suitcase survived the Holocaust. Its owner, Else Ury, did not.

Decades later, a group of high school girls from Berlin were visiting the memorial site at the concentration camp on a class trip. They noticed the bag among other suitcases in an exhibit and recognized the name immediately: Else Ury was the author of “Nesthäkchen,” a series about a blue-eyed and blonde girl from a middle-class German family.

Ury wrote more than 30 books for children, in addition to short stories and travelogues for a Berlin newspaper. Her books sold millions of copies between 1918 and 1933. Then, with the Nazis in power, Ury was barred from publishing her works, even though her last book featured Adolf Hitler as a hero. She died at Auschwitz on Jan. 13, 1943. She was 65.

The “Nesthäkchen” series was reprinted after World War II and became a television show that attracted 13 million viewers, including the girls who noticed the suitcase.

But neither her publisher nor the TV series mentioned what happened to the author during the war. The girls checked the name and address on the suitcase against deportation lists and wrote a school report on Ury’s fate as a victim of the Holocaust.

Their teacher told a Berlin newspaper, which produced an article that was picked up around the country. The story of how one of Germany’s most popular children’s book authors — before and after the war — was killed in the Holocaust became national news, and piqued the interest of writers and historians.

Ury’s most popular series recounted the life and adventures of Annemarie Braun, known by her nickname “Nesthäkchen,” or the baby of the family. Amid a comfortable life, the heroine challenged the conservative rules and order of Wilhelminian Germany and pursued an education in the Weimar Republic — over the objections of her father.

As the war waged around them, German children clung to their “Nesthäkchen” books, packing them among the few items they were allowed to include in their luggage when their own families were forced to flee. Later, as those children grew to be mothers and grandmothers, they passed the books on through the generations of their family. 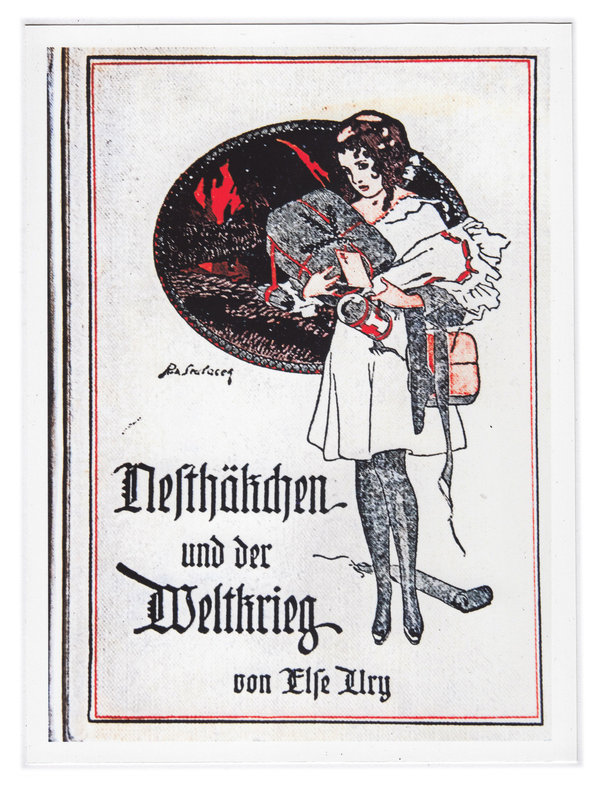 “Girls could identify with ‘Nesthäkchen,’ ” said Marianne Brentzel, who published a biography about Ury in German, “Nesthäkchen kommt ins KZ,“ or “Nesthäkchen Arrives in the Concentration Camp,” in 1992. It was expanded and republished in 2007.

“Annemarie Braun was courageous and a tiny bit too sassy. Most girls never dreamed that someone could be like that and get away with it,” Brentzel said in a telephone interview. “That is why she was so beloved.”

Hannelore Kempin, a retired schoolteacher from Berlin who was born three years after the end of World War II, inherited the prewar volumes her own mother had hoarded during the bombings of Germany and in the chaotic years that followed.

“She had kept them safe throughout the war and gave them to me when I was a girl,” Kempin said in an interview at a cafe in Berlin’s Charlottenburg district, blocks from the apartment where Ury spent her most productive years.

Johana Else Ury was born on Nov. 1, 1877, one of four siblings, and raised in a comfortable middle-class home in Berlin. Her father, Emil Ury, was a tobacco factory owner, and her mother, Franziska (Schlesinger) Ury, ran the household, cultivating a love of literature and the arts in her children. Although she grew rich from the proceeds of her books, Ury lived her whole life with her family and cared for her ailing mother until she died.

She attended Berlin’s first public secondary school for girls through the 10th grade, an experience that would influence her writing. While the young adult novels of her time told stories of girls growing up and preparing for marriage, Ury’s characters went to school and dreamed of becoming doctors or teachers.

“Girls in Else Ury’s books were allowed to do the same things as their brothers. That was unheard-of at the time,” Kempin said. “For young women to be reading that they could be the girls they wanted to be, at a time when society imposed a lot of rules on their lives, was revolutionary.”

In addition to being best-sellers in German, Ury’s works were translated into French, Dutch and Norwegian during her lifetime. But she and her stories remained virtually unknown to English-speaking readers.

Steven Lehrer, an amateur historian and author who grew up in Los Angeles surrounded by exiled German and Austrian intellectuals, many of them Jews, discovered her books on a trip to Berlin in the 1990s. He was taken by their sly humor and subtle plays on language, and what he called “the unique artistic and musical sensitivity and a strain of cruelty that runs through them.” He later began translating the volumes of the “Nesthäkchen” series into English.

“She’s very funny, but then she has this kind of charming gruesomeness,” he said.

Beginning in the 1950s, the “Nesthäkchen” books were republished in West Germany, and edited to remove any strains of patriotism, including banning Volume 4, “Nesthäkchen and the World War,” which told of efforts on the home front during World War I.

That volume, and her last work, “Youth to the Front,” written in 1933 and featuring Hitler, opened Ury to criticism among her peers.

The German literary critic Alfred Kerr disparaged her as a “pig” for trying to appease the Nazis, Kerr’s daughter, the children’s book author Judith Kerr, said in an interview with Der Spiegel in 2007.

It “didn’t do her any good,” said Kerr, adding that she, too, had loved the “Nesthäkchen” books as a child before her own family fled Berlin for Britain in the 1930s. Ms. Kerr died in May.

In 1935 the Nazis, who unlike many of her readers were keenly aware that Ury and her family were Jewish, barred her from the country’s literary association and banned publication of her books. Over the course of the next eight years, they would force her to leave her family’s home and give up her summer residence. Her German citizenship was revoked, and she was deported to Auschwitz.

By the 1990s, the circumstances of her death still remained largely unknown to the public, although her books had been reprinted. But the reports of the student sleuthing at Auschwitz inspired historians to tell her story. The House of the Wannsee Conference secured a loan of the suitcase for an exhibition in 1997 about Ury’s life and death. A pedestrian passage in the German capital was named for her and memorial plaques mounted on the buildings where she had lived.

Logan Ury, the author’s great-grand niece, said that she was grateful for the discovery of the bag that led to her a better understanding of the importance of Ury and her work, which even in the family had remained largely unknown for decades.

“That suitcase touched off a wave of research about the woman who wrote these stories that were immensely important to young women in a way that only children’s literature is,” she said in a telephone interview from her home in San Francisco. “The characters she created defined German life at a certain time, meant so much to people and for that she should be remembered.”

Kourtney Kardashian Sends Love To Penelope, 7, After Birthday: I Learned ‘Pure Love’ From Her