ABC director Joseph Gersh has said he would have preferred rape allegations against Industry Minister Christian Porter were never made but asserted it was the national broadcaster’s responsibility to hold the powerful to account and that its board would never intervene in editorial matters.

Mr Gersh, who has sat on the ABC board since 2018, slammed accusations the national broadcaster is engaged in a witch hunt against the government, despite a high-profile legal dispute with Mr Porter over stories it has published and growing criticism from Liberal Party figures over the issue. 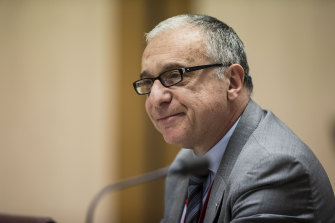 ABC director Joseph Gersh has denied the national broadcaster is engaging in a witch hunt.Credit:Dominic Lorrimer

“The ABC has to be frank and fearless in what it does, in holding those in power to account and it has to do so consistently with its charter and editorial policies, and the board can’t interfere,” Mr Gersh said in an interview with ABC Melbourne radio announcer Virginia Trioli. “Would I prefer a world in which these allegations were never made? Yes. But that’s not my choice. And nor is it my role as a board member to stop the ABC acting professionally in the pursuit of its obligations to the public.”

Mr Gersh is the executive chairman of Gersh Investment Partners. He sits on the ABC board with chairman Ita Buttrose, Peter Lewis, Georgie Somerset, Fiona Balfour, Mario D’Orazio and Peter Tonagh. He appeared on ABC Melbourne on Thursday morning after former Victorian Liberal Party president and ABC board member Michael Kroger said that Ms Buttrose should resign from her position.

He said he could understand that some people within government were upset about Mr Porter’s allegations but said all decisions regarding the article were made by the editor-in-chief, managing director and editorial staff. “Those decisions are not made by the board,” Mr Gersh said. “That separation of power has been in existence for some time.”

ABC managing director David Anderson will appear for the second time in weeks before a parliamentary committee to face questions about the settlement of a defamation case brought by Mr Porter.

Mr Porter dropped his defamation action against the ABC over its reporting of a historical rape allegation against him on Monday, but the settlement deal was followed by an exchange of barbs between the parties as they disputed the details. Mr Porter strenuously denies the allegations.

The ABC has added an editor’s note to the article which states that it did not intend to suggest Mr Porter had committed the alleged criminal offences or that they could be substantiated to the “applicable legal standard”. However the article remains online unamended and the broadcaster has maintained it has not paid Mr Porter any damages – only his mediation “and related costs”.

Mr Gersh said the board continued to have a professional relationship with senior members of government as he rejected the comments made by Mr Kroger that the bias against the Coalition and conservative politicians was out of control and that Ms Buttrose was a “hopeless failure”. 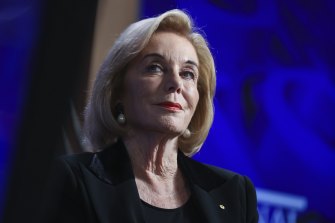 Mr Gersh said Ms Buttrose was the right appointment and is doing a “great job”. “It was out of line and a little disrespectful,” he said. He also said the board was not engage in a witch hunt.

“I do think that the ABC has to be vigilant – there could be more diverse voices on the ABC, there could be more debate, there can be more conservative spokesman because that’s what they’re talking about, but that’s a whole other subject,” he said later in the interview .“The ABC is at its best when it’s pursuing issues from from the centre perspective and taking into account all points of view.

“But the notion that the ABC board in particular is engaged in some kind of witch hunt against this government or any other… is just nonsense. It’s just not the case.”

The Business Briefing newsletter delivers major stories, exclusive coverage and expert opinion. Sign up to get it every weekday morning.