One in three Brits admit to never cleaning new pants

Do YOU wash new underwear before wearing it? Experts warn that failing to put pants and bras in the machine puts you at risk of swollen genitals, fungal infections and mastitis

While brand new underwear may seem clean – wearing fresh pants without washing them could be putting you at risk of skin irritation and infections, according to a biochemist.

In a survey of 1,061 consumers conducted by skincare experts The Derm Review, 31 per cent of consumers asked admitted they never wash their new underwear before putting it on.

Skincare biochemist Elle Macleman warned that wearing new pants could have ‘serious impacts on skin health’, from contact and irritant dermatitis to swelling of the vulva.

She revealed forgetting to pre-wash your trousers could lead to skin irritation caused by dyes or fungal infections in the genital area caused by previous customers, while dirty bras could lead to mastitis. 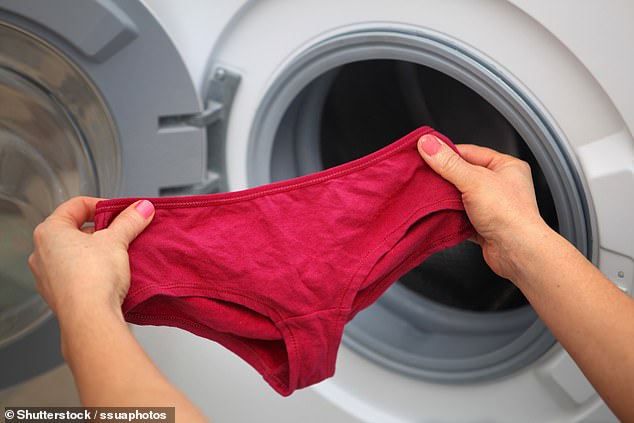 In a survey of 1,061 consumers conducted by skincare experts The Derm Review, 31 per cent of consumers asked admitted they never wash their new underwear before putting it on. Stock image

INFECTIONS CAUSED BY BACTERIA ON UNDERWEAR

While wearing unwashed clothing of any kind can carry risks, the most dangerous garment to wear without washing is underwear.

Harsh chemicals used on new clothing can cause irritation in intimate areas, while  fungal and bacterial contamination from it’s time on the shop floor increases the risk of uncomfortable or painful infections.

How clean is YOUR bedding? One in three admit to only washing the sheets once a year or less

In a survey of 2,000 people by Hammonds Furniture last year, 30 per cent of those asked confessed they wash their bedding once a year or less, while a further 38 per cent said they washed their coats the same amount.

Over a quarter of those asked admitted they only washed their cushions and blankets once a year, while a further 18 per cent washed their jeans just as infrequently.

When it comes to age, millennials are the cleanest with 17 per cent washing clothing after one wear, while 65+ year-olds have the lowest percentage of those who wash after one use with 13 per cent.

‘The data shows many consumers do wash their clothes soon after purchase, however, a large proportion do not’, said Elle.

‘While the risks are generally low, not washing new garments can potentially have serious impacts on skin health, including, contact and irritant dermatitis, Vulvitis, or swelling of the vulva, and other fungal or bacterial infections.

‘When it comes to underwear, chemical irritants, as well as fungal and bacterial contamination, are real possibilities. While not washing a new bra could expose a consumer to a number of issues, such as staphylococcus and yeast infections.’

RISK OF MASTITIS THROUGH UNWASHED BRAS

Forgetting to wash bras means the garment will still be covered in bacteria from being handled by staff and customers before the purchase.

This can be especially dangerous for new mothers who are breast-feeding their children because they are more vulnerable to conditions such as mastitis, an inflammation of breast tissue which often involves infection.

Elle went on: ‘Breast-feeding mothers should be especially thorough when it comes to washing their bras, as it can increase their risk of mastitis.’

RASHES CAUSED BY DYES IN SHIRTS AND TROUSERS

New shirts often contain dyes which can lead to rashes and irritation, while forgetting to wash your trousers can cause fungal infections in the genital area and feet due to other customers trying the garment on beforehand.

‘Not washing shirts or trousers can potentially expose consumers to irritation and itching caused by dyes that can lead to red rashes, especially in areas where sweating occurs on the upper body’, said Elle.

‘Wearing unwashed trousers could even transfer athlete’s foot from others who have tried the pair on before you’.

‘While a man’s genital area could develop a fungal infection in the same way, due to lingering fungal spores and contamination.’

While shoes are one of the safer items to wear without washing, it is not without risks to wear a pair of trainers without giving them a clean beforehand.

Display shoes are particularly risky because of the several customers who have tried them on – leaving behind fungi, chemicals, and bacteria which can lead to irritation or infection.

Elle added: ‘On the whole, buying new shoes is unlikely to be an issue, however, when we think about who might have tried or worn that shoe before us, a lack of cleansing after purchase can increase the risk of adverse reactions or infections.’

‘Fungi, chemicals, and bacteria can all be present in new shoes just as much, if not slightly more when buying display shoes, than the average clothing purchase.’

‘Overall, it’s important that people are aware of the risks of not washing their new purchases.

‘While the risks from new clothes are generally low, certain items (such as underwear) should almost certainly be washed before wearing, if nothing more than to freshen them and prevent any potential risk.’

Spoilers: Harvey tries to amends for shocking racism in EastEnders

We need to build up immunity! Dr Hilary Jones says go out if you have a cold
Recent Posts