Home » Lifestyle » On policy, there’s less to Morrison’s words than meets the eye On policy, there’s less to Morrison’s words than meets the eye

In the fifth week of his prime ministership, Scott Morrison posted a tweet accompanied by a picture of two blue thongs. The thongs were painted with white stars and the Union Jack to represent the Australian flag. They were propped upright in sand, the ocean behind them. The tweet read:

Indulgent self-loathing doesn’t make Australia stronger. Being honest about the past does. Our modern Aus nation began on January 26, 1788. That’s the day to reflect on what we’ve accomplished, become, still to achieve. We can do this sensitively, respectfully, proudly, together.

It was accompanied by a link to an article in The Daily Telegraph, in which the picture appeared. The story reported that the Byron Shire Council had decided to hold its citizenship ceremonies not on Australia Day, but the evening before.

This might seem like an innocuous shift – but there was a political charge to it. The council wanted to make the change to acknowledge that Australia Day itself – which marked when Arthur Phillip, commander of the First Fleet, stepped ashore in Sydney Cove – was the date “the cultural decimation and denigration of the First Australians began”. This was the indulgent self-loathing the Prime Minister was so annoyed about.

So began that year’s version of what seemed to be becoming a new Australian political tradition. It should be odd for a major newspaper to focus on the activities of a single council, and odder still for a prime minister to weigh in. But it was predictable enough: Malcolm Turnbull had inaugurated the practice the year before, attacking another council for something similar. Morrison was merely following the play. Byron Shire Council had to be stopped.

Morrison’s tweet was not impulsive. The story in the Telegraph was three days old. On the same day the tweet was posted, the Prime Minister gave quotes to The Courier-Mail, and provided a column in his name. Most of it was just a longer version of that tweet – but there was a surprise at the end. He suggested that a separate occasion be set aside to honour and acknowledge Indigenous Australians: “That is a topic for another day”.

As anyone could have predicted, the topic instead arose again immediately, when Morrison, who had made himself available to the media, was asked about the column that had appeared in that morning’s papers. “I have said just today that it would be good to have a chat about it. We should think about it,” he said.

The interviewer said, sensibly enough: “But I guess, Mr Morrison, we’ve been talking and maybe arguing about another Indigenous day for several years now. So to put this out in the public arena, haven’t you got an idea for another date?”

“Well, I’ve got some private thoughts but I’m more interested to know what other Australians think,” Morrison replied.

The interviewer asked if that day should be a public holiday. That was a matter for the states and territories, came the reply. Morrison ended with this upbeat message: “You don’t have to drag some people down to lift others up. It’s the same when I talk about tax. Why do you have to tax people more to tax others less? That’s not how you bring Australians together. I want to bring Australians together about this, not drive them apart”.

It was a strange incident. The Prime Minister of the country had made a suggestion of national significance, and then said now was not the time to discuss it. When asked about his grand proposal, it seemed he’d barely thought about it.

In spirit, Morrison’s attack on the Byron Shire Council stretched back at least to John Howard’s attacks on “black armband” history – a phrase that came from the historian Geoffrey Blainey, who contrasted it with the “three cheers” approach – and specifically to a lecture Howard gave in 1996. Howard described the challenge:

To ensure that our history as a nation is not written definitively by those who take the view that we should apologise for most of it. This black armband view of our past reflects a belief that most Australian history since 1788 has been little more than a disgraceful story of imperialism, exploitation, racism, sexism and other forms of discrimination. I take a very different view. I believe that the balance sheet of our history is one of heroic achievement and that we have achieved much more as a nation of which we can be proud than of which we should be ashamed.

In his maiden speech, Morrison had seemed to reject Howard’s view. The first time I read this passage I had been impressed; here was a man, I’d thought, who felt deeply that wrongs had been done and wanted to speak about those matters with nuance. Here is the text:

I do not share the armband view of history, black or otherwise. I like my history in high-definition, widescreen, full, vibrant colour. There is no doubt that our Indigenous population has been devastated by the inevitable clash of cultures that came with the arrival of the modern world in 1770 at Kurnell in my electorate. This situation is not the result of any one act but of more than 200 years of shared ignorance, failed policies and failed communities. And we are not alone: our experience is shared by every other modern nation that began this way. There is much for us all to be sorry for. Sadly, those who will be most sorry are the children growing up in Indigenous communities today, whose life chances are significantly less than the rest of us.

We can choose to sit in judgment on previous generations, thinking we would have done it differently. But would we? Hindsight is a wonderful thing. Nor can we compare the world we live in today with the world that framed the policies of previous generations. So let us not judge. Rather, having apologised for our past – as I was proud to do in this place yesterday – let us foster a reconciliation where true forgiveness can emerge and we work together to remove the disadvantage of our Indigenous communities, not out of a sense of guilt or recompense for past failures but because it is the humane and right thing to do. Having said this, we cannot allow a national obsession with our past failures to overwhelm our national appetite for celebrating our modern stories of nationhood. We must celebrate our achievements and acknowledge our failures at least in equal measure. We should never feel the need to deny our past to embrace our future.

Reading this a second time, and paying more attention, I found my admiration faded. The more time I spent with the passage, the more Morrison’s words seemed like confused mush. Like his comments on Australia Day, the text was nothing more than a series of attempts to take every possible position. What I had mistaken for nuance was in fact a refusal – or perhaps an inability – to say anything clear.

The day before this maiden speech, the Labor prime minister, Kevin Rudd, had apologised to Indigenous Australians for the laws and policies of governments over many years, and especially for the removal of children from their families. This was an acknowledgement of specific sins, done by specific people. Morrison declared he was proud to have been part of that apology.

But if you look at his own language, it is unclear what he thought he was apologising for. There was devastation – but it was not caused actively, by someone, but only passively, by the “inevitable clash of cultures”. If there was any blame to go around, it seemed, from his reference to “shared ignorance”, that it lay equally with Indigenous people. The same thing happened everywhere in the world, he said, seeming to excuse it altogether. Then he said there was much for us all to be sorry for, which sounded a lot like Morrison was repeating his point about shared blame – but this was unclear, because Morrison left even the word “sorry” in a fuzzy and confused state, saying, in his next breath, that those who would be most sorry were Indigenous children. 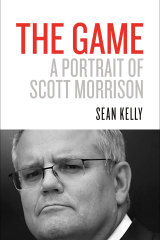 The Game: A Portrait of Scott Morrison by Sean Kelly.Credit:

What Morrison says often sounds, at first, like it means something. Instead, you realise afterwards that it means nothing at all; or, rather, that each sentence expresses a different position, so that by the end it is likely, if you are so disposed, to come away believing that Morrison agrees with you, whatever your position happens to be. This may be deliberate. It is also possible that it represents Morrison’s best attempt at considered thought.

A maiden speech is often taken as a concise encapsulation of a politician’s outlook on the world; a pure expression of their actual self before the deadening effect of party politics and the need to please their seniors overwhelm them. Morrison’s speech is not concise; rather than clarity, it offers confusion. In this, it is just as much a classic maiden speech as any other – because this is Morrison, exactly. As so often in Morrison’s career, there is a sense that nobody, finally, is responsible. Bad things seem simply to happen, without the clear intention of anyone involved. If you go looking for solid meaning, something to tell you what he thinks about the world, you will be disappointed. It is like trying to grab at empty air.

This is an edited extract from The Game: A Portrait of Scott Morrison by Sean Kelly, published by Black Inc. Out November 1.

Jennifer Garner Just Wore the TikTok Teen Trend That Was Popular When She Was a Teen, Too

Ron Howards Age, Family, And How He Spends His $200 Million Net Worth
Recent Posts