Holidays are here! Crown Princess Mette-Marit poses for a seaside snap with her husband and two children at the family’s chic Scandi summer house on a tiny island in Norway

Crown Princess Mette-Marit and her family looked like they belong on a postcard in a new set of official portraits, marking the start of their summer holidays.

The royal and her husband, Crown Prince Haakon, are enjoying a break at their summer house on Dvergsøya, a tiny island in Kristiansand municipality in Vest-Agder county.

The mother-of-two looked glowing in a crisp white dress as she posed with her family on the island, which is just 0.7 kilometres across.

In one particularly touching snap, her 15-year-old Ingrid Alexandra is seen clutching her younger brother, Prince Sverre Magnus, 13, around the waist as they beam for the camera. 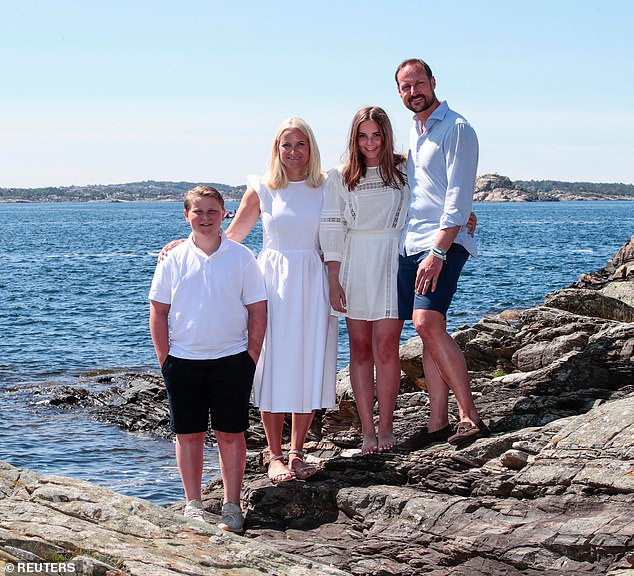 Crown Prince Haakon and Crown Princess Mette-Marit and their children pose by the water on Dvergsøya, a tiny island in Kristiansand municipality in Vest-Agder county 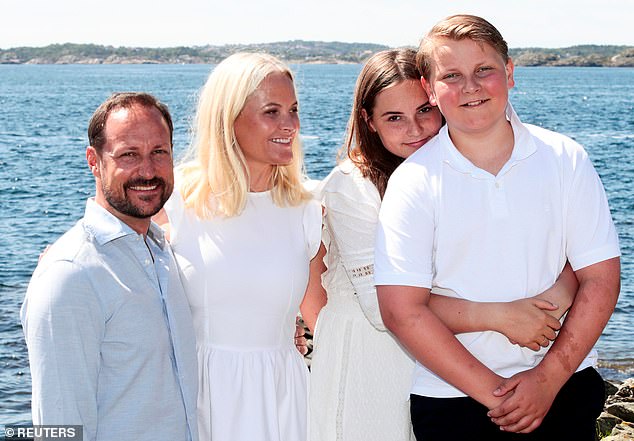 In one particularly nice family picture, 15-year-old Ingrid Alexandra is seen hugging her younger brother, Prince Sverre Magnus, 13, around the waist as they parents smile

The family looked ultra-relaxed as they donned their summer gear, with the Crown Princess and her daughter opting for light dresses after a trip to the Spanish holiday islands of Ibiza and Formentera.

According to Side2 in Norway, more guests are expected to arrive on the private island next Saturday, for Crown Prince Haakon’s upcoming 46th birthday.

Prince Sverre Magnus wore a pair of Yeezys sneakers by Kanye West with his shorts and while polo, while his father looked sharp in a blue shirt, shorts and loafers. 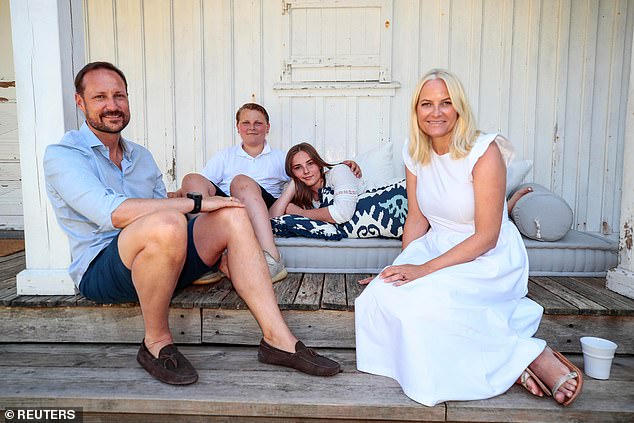 In one relaxed snap, the family perched on the porch outside their summer house, which they have rented for celebrations to mark the Crown Prince’s upcoming 46th birthday 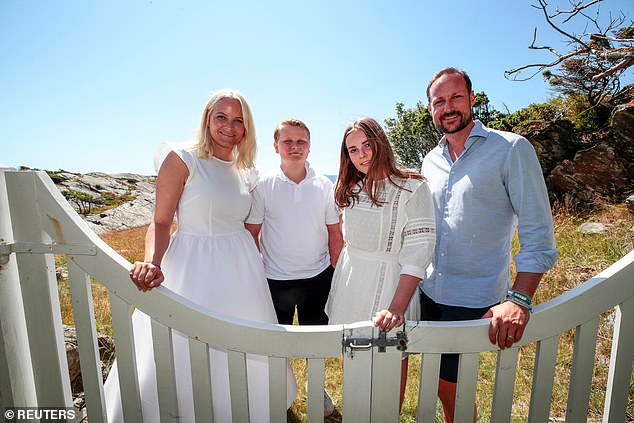 The family looked ultra-relaxed as they donned their summer gear, with the Crown Princess and her daughter opting for light dresses to show off their tans after a trip to Ibiza and Formentera in Spain

They lined up along the rocky beach on the quiet island and also posed on the wooden porch of an old house.

Last year, the Crown Princess Mette-Marit, 45, revealed she was suffering from a life-limiting condition called chronic pulmonary fibrosis, in which scar tissue forms in the lungs, and can cause serious breathing problems.

The mother-of-three released her own statement following the diagnosis where she spoke of her determination to carry on as normal.

She said: ‘Although such a diagnosis in times will limit my life, I’m glad that the disease has been discovered so early. 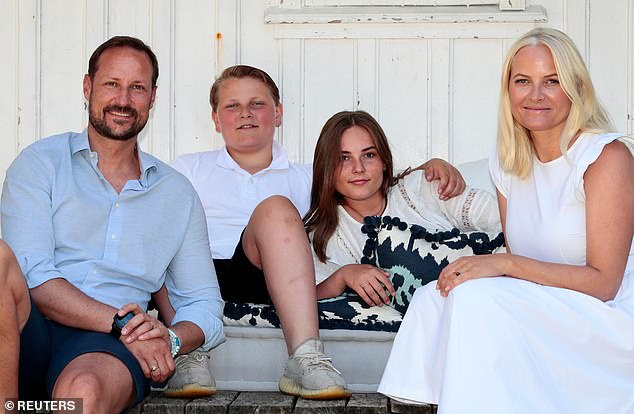 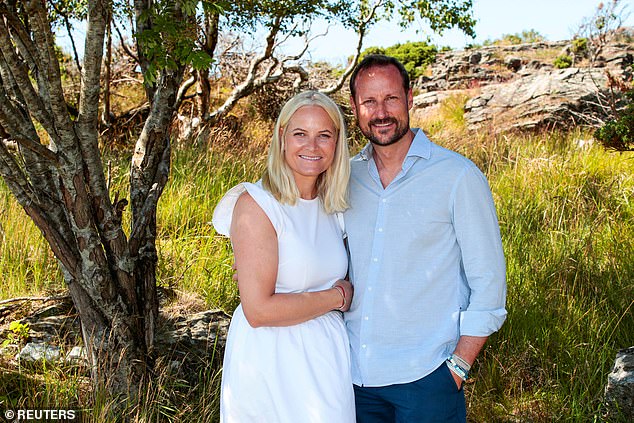 ‘My goal is still to work and participate in the official programme as much as possible.’

As well as her two children with Prince Haakon, she also has a son Marius Borg Høiby, from a previous relationship.

Crown Princess Mette-Marit, 45, was born close to the island, in Kristiansand.

During WWII the city of Kristiansund was protected by an anti-aircraft battery on Dvergsoya in a bid to nullify German air raids.

The villa the family stay in, Vogts villa, is owned by the municipality of Kristiansand and rented to the royals. 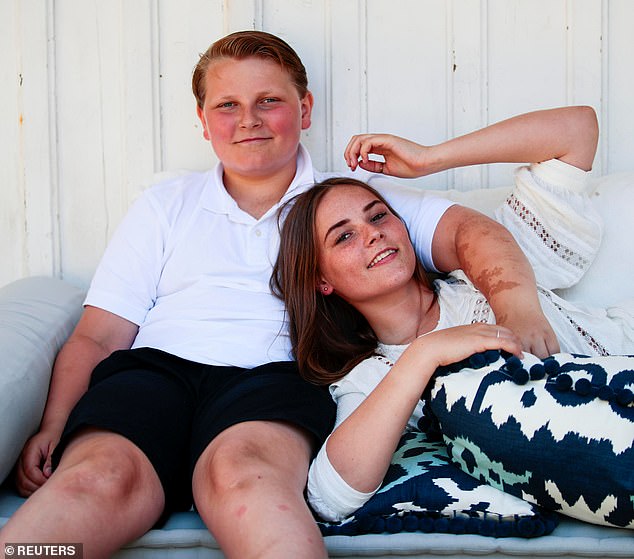 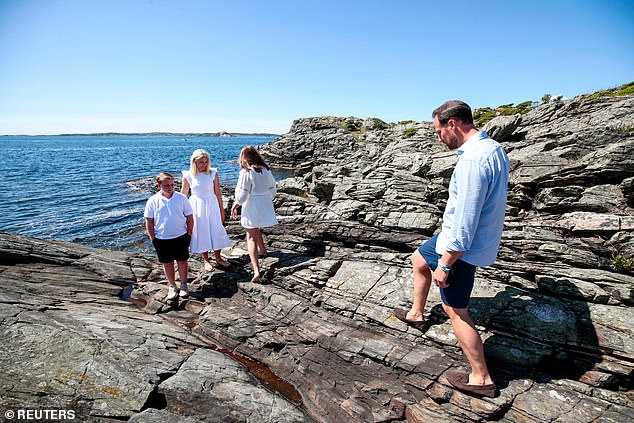 The villa the family stay in, called Vogts villa, is owned by the municipality of Kristiansand, where they can enjoy the rugged coastline 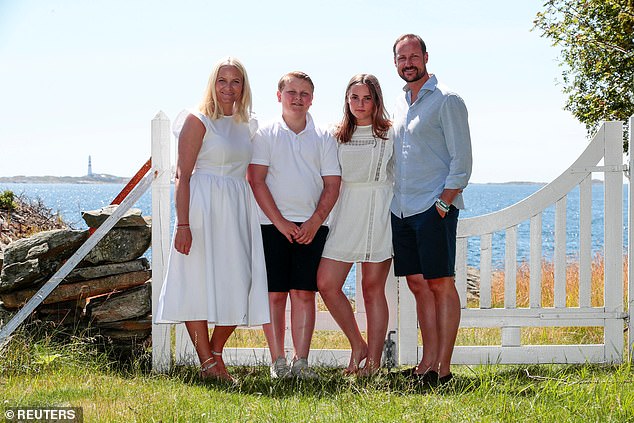 Prince Sverre Magnus wore a pair of Yeezys sneakers by Kanye West with his shorts and while polo, while his father looked sharp in a blue shirt, dark shorts and loafers 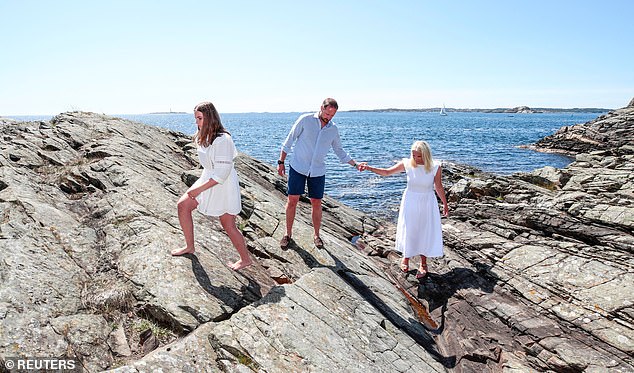 Princess Ingrid Alexandra braved the jagged rocks, opting to go barefoot as the prince gave his princess a hand. The family enjoy the sanctity of the island on a yearly basis 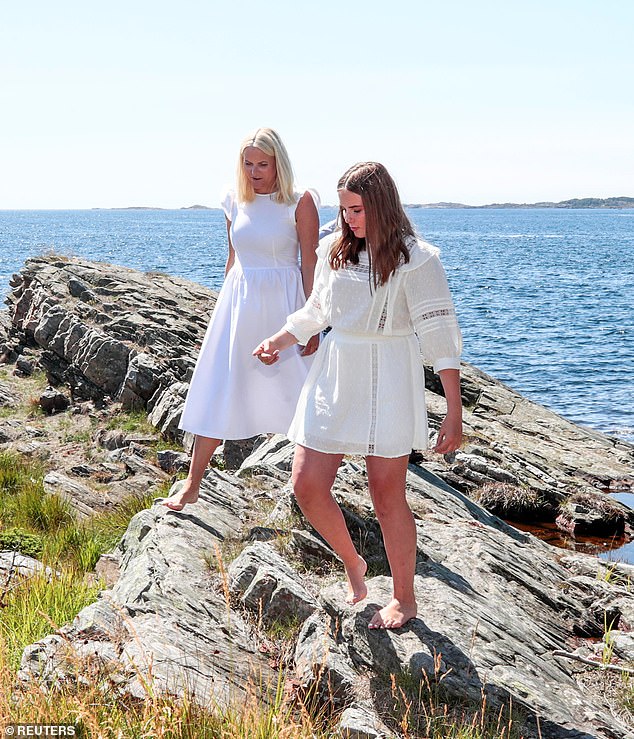 AGT: This Swedish Singer's Cover of "Imagine" Was So Stunning, Even Simon Cowell Got Emotional